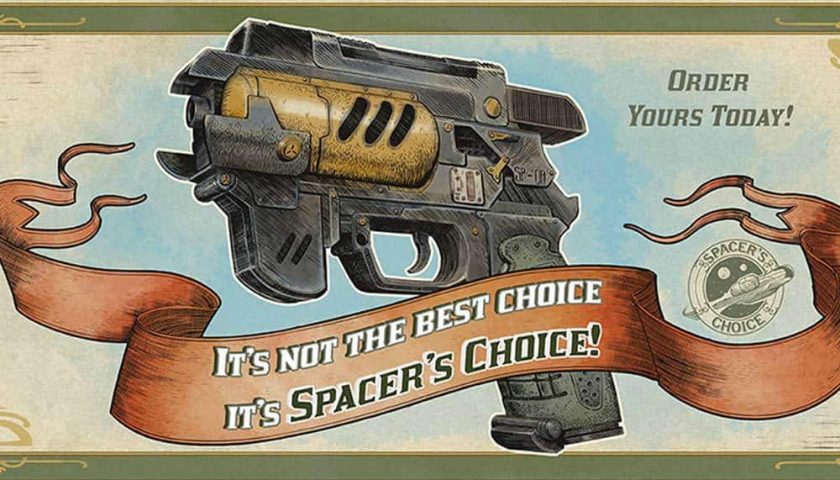 Journey to the Outer Worlds – Down With Spacer’s Choice

Hearing the vapid jingle of the budget brand merchant in The Outer Worlds makes my skin crawl. I want to bludgeon that smug moon-faced mascot into submission with a stun baton every time their likeness appears. Spacer’s Choice represents the worst of humanity and needs destroying – seize the means of production and so on.

Six hours into the highly impressive The Outer Worlds, I’m just about to wrap things up on Edgewater, the dwindling production settlement your adventure begins on. I spent the bulk of these opening hours saddened and infuriated – for all the right reasons. Obsidian’s meticulous construction of The Outer Worlds’ script, characters and settings is astoundingly good.

For those who have not yet begun their capitalist adventure, The Outer Worlds is packed with incisive commentary on many real-world issues. Including the likes of capitalism, classism and human rights, Obsidian’s latest RPG provides a glimpse at what spacefaring life might look like if faceless corporations have their way.

Coming back to Spacer’s Choice, they are the corporation who own Edgewater and its inhabitants. Yes, you read that correctly; the people who reside in Edgewater are considered company-owned assets. Everything revolves around keeping the settlement’s Saltuna cannery operational. Anything that hinders productivity is an unacceptable hit to the bottom line. Sick leave is taken out of employees’ pay. Medical treatment is only given to those who are considered valuable assets. Worst of all, death is considered not as a tragedy, but as an expense to be dealt with. Edgewater’s residents have to rent their own gravesites, such is the cold and unfeeling nature of Spacer’s Choice. Anything to make a quick buck while doing the absolute bare minimum to provide for its people.

Spacer’s Choice reprehensible stance on human life made me think about how much western society values career and good health. If you fall outside the ideal of a stable job and the health to sustain a career, you are doomed to slip through the cracks of a world built on accumulating wealth.

One empty platitude those under the oppressive thumb of Spacer’s Choice repeat ad nauseam is “hard work fortifies the spirit”, believing that hardship and illness can be overcome by simply working harder. Your health gets worse by enacting this stupid philosophy, resulting in being denied medical treatment because you obviously weren’t working hard enough? It’s just survival of the fittest taking nature’s course! My blood boils at the idiotic thought that all adversity can be overcome by sheer will and determination, ignoring many of the systemic barriers that exist. Particularly, this completely ignores the complexities of the many people living with chronic illnesses – physical and mental, visible and invisible. Is your inherent worth forfeit due to factors completely beyond your control? Absolutely not.

Another perspective is that Spacer’s Choice can be viewed as an allegory for game development. It’s widely known that brutal working conditions are prevalent in many major studios, all for the benefit of the company or the deified capital-G “Gamers”. Thankfully, there appears to be a recent trend of prominent studios focusing on employee welfare, which is the reason behind some of the recent game delay announcements. More workplaces need to recognise that a survival of the fittest culture does not belong in the 21st century. People happen to be fallible humans in need of support and considerations made for individual needs.

In sparking a rage, a burning desire to write this, I applaud the narrative and writing team at Obsidian. You’ve parodied real-life in a way that feels scarily not too distant from what an unchecked reality could become. What I hope now is that the rest of my time in The Outer Worlds can be played out as a nuanced revenge fantasy to improve the lives of all residing within the Halcyon system.