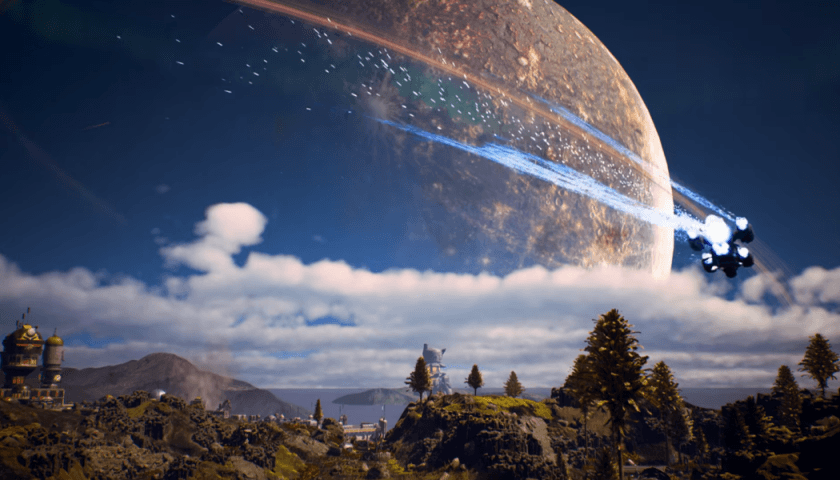 I feel like we’ve all been waiting an eternity for The Outer Worlds to come out, despite it being only being announced earlier this year. Perhaps it was knowing that Obsidian were clearly looking at former RPG giants Bethesda, thumbing their noses with an “anything you can do, we can do better” attitude, perhaps it was knowing Obsidian’s greatest games so far have been sequels to existing franchises and licensed games. Whatever the case, many a gamer knows the potential of Obsidian Games and The Outer Worlds, and the game couldn’t get here quick enough.

There are many ways in which The Outer Worlds is a refreshing experience, including the way the game itself has been marketed and sold. There was no mention of a season pass or downloadable content, and there was only one edition of the game at launch (no steel tins and exclusive downloads for pre-orders – huzzah!). In addition to this,  I haven’t encountered a single graphical glitch or game-breaking bug –  it’s obvious that a lot of care and passion has gone into the game.

So how is the game itself? Pretty darn good. I wouldn’t say it’s ground-breaking, because I firmly believe it isn’t, but it is damn fun. Missions have been interesting, character dialogue has been entertaining and evocative (I wanted to shoot Reed Tobson and Vicar Max within minutes of knowing them), weapons are plentiful and satisfying, the environments are vibrant and varied, and there is just the right amount of humour thrown in as well.

Despite all this, I feel the game hasn’t quite escaped its influences. There are tons of reviews and articles suggesting it has, but I disagree. That doesn’t mean I don’t like The Outer Worlds, it just still very much feels like a Bethesda joint (albeit a much more polished one that they themselves should have made a long time ago). The things that should separate The Outer Worlds from Fallout just don’t to it enough. I am playing this game almost the exact same way I play every Bethesda title.

I’m reminded of an Eddie Murphy joke, one where he describes giving a cracker to a starving person and they believe it to be the best cracker they’ve ever had in their life. The Outer Worlds fulfils a lot of needs. It’s an RPG released on both PC and consoles, it’s set in space, it’s an open-world and it’s polished. We were starving for a decent RPG and The Outer Worlds delivered.

I don’t want people to think I don’t enjoy the game. Quite the contrary, it has dropped my jaw quite a few times. There are times where I can barely believe just how gorgeous some of its moments are, from the varied, lush environments, to the ultra-slick slow-motion dismembering of Marauders. I thoroughly enjoy interacting with the game’s NPCs, and I love how I can take a stealthy or gung-ho approach, either clubbing people over the head or blasting them with a grenade launcher respectively.

I’m hoping I finish Outer Worlds. I’m hoping the story develops in a way that it enthrals me. I want the game to surprise me with some unique mechanics or even different takes on the established gameplay mechanics it does use. It seems as though the game is doing well. It’s receiving largely favourable reviews and reactions in other content, and for that I’m grateful. Hopefully, it means that Obsidian develop more original I.Ps and take some risks. They have more untapped potential in them, and the best is yet to come.