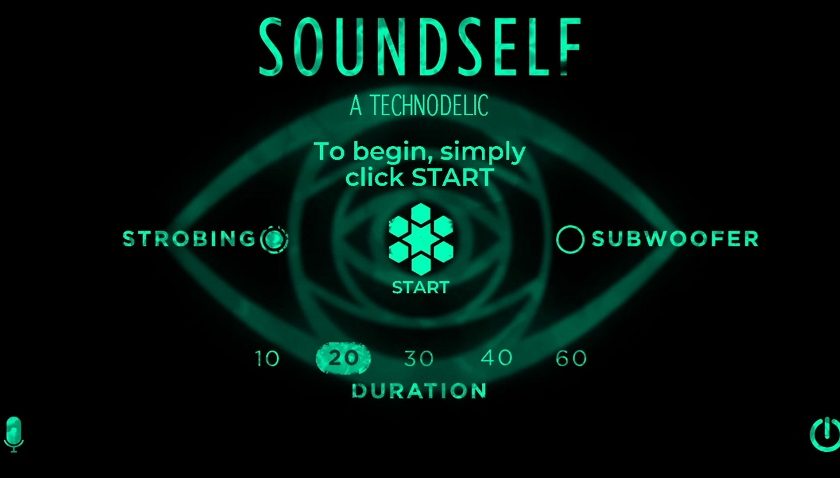 Soundself – Sound on an Acid Trip

Call me a prude, or unadventurous, but I have never felt the need to take drugs. This seems to be some level of pre-requisite in the initial preview commentary of Soundself; that to find a familiar comparison you need to engage in a chemical experience that absolves you of responsibility or active citizenship.

Unfortunately, I have not had any similar experience. So perhaps I am a little too straight-laced for Andromeda Entertainment’s game. But it is asking me to equate with a personal experience so I will attempt to do so as I progress my observations.

For those who want to qualify Soundself in the context of game genres, it could be best described as a “vocal walking simulator” and a significantly fine one at that. Its responsiveness is intriguing, and its subsequent simple interface strips away years of focus on graphics making us happy (hey look Ma – I’m making the graphics happy!).

However, it is probably more fair and diplomatic to say that Soundself is not really a game. It is a visualisation tool and a guided meditation, using your breath and long tones to encourage different visual artefacts to the surface and beyond your periphery. You can play with or without a VR headset (I used my PC monitor, headphones and my computer microphone), turn off strobing, and adjust the duration of the visualisation as required.

While I do not doubt that this has the capacity to be a beneficial experience for people who want to find a way to still their minds, I struggled with it a bit more than I expected. I anticipated my own needs by turning off the strobing setting, but it was actually the core breathing mechanic that undid my experience with the apparition. Soundself is smart enough to use the duration and volume of long tones to propel the visualisation, but they also decided to utilise my intake of air to similar effect, with sharp spikes in colour accenting the display when I inhaled. I felt the need to breathe in sharply and quickly to continue the effect, breaking the sense of calm which was not conducive to the experience.

The other issue for me was my response to reverberation. I have an annoying sensitive ear to fluctuations in pitch, which is manageable in large concert halls and convention centres where sound has somewhere to go but is definitely not OK in small focused areas where sound has reduced capacity to echo. When my skull is the echo chamber imprisoned by over-ear headphones, it seems like I’m just going to have a bad time.

In early 2014 I was dragged to a psychedelic space rock concert in a hostel bar. I sat through the setting up as the musicians set up their effects pedals, and my teeth grated as the volume was turned up and the levels were misaligned. The speakers reverberated on the wrong walls, creating such a discordant wrong that I had to bolt out of the bar and lie down in the passenger side of a 10-year-old Peugeot in order to stop myself from vomiting.

Unfortunately, that was the same experience I had with Soundself.

Wow. Looks like I found my personal relatable moment.

Soundself is the undoing of its own self, which makes it difficult to review beyond a personal experience despite my best attempt to do so. It’s brilliant and smart, but it places too much emphasis on the right conditions to recreate the right experience. As a result, it either places faith in a person’s ability to tone at a consistent pitch, or a person’s fortitude to withstand the dissonance. I am the unfortunate sod who had the misfortune of not achieving either, which means that Soundself is not the experience for me.

Soundself was reviewed on PC with code kindly supplied by the publisher.