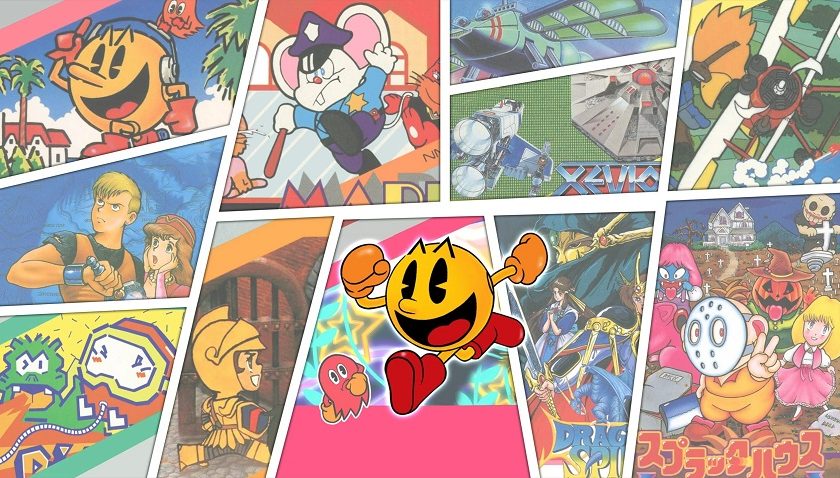 Namco Museum actually comes in two different packs, so we gave one pack each to Sarah Ellen and Jenn Christodoulou and sent them off in a DeLorean with nothing but their Switches and these classic arcade games. This is what they discovered on their journey into the past.

Sarah: Namco Museum Archives is a night out with your friends at an arcade bar in front of a whole lot of game cabinets that you know by reputation, feeling fretful as to which one you should play that will mask the fact that you have little or no skill in them whatsoever. Only in a brief moment do you remember that you are in your living room, most likely playing this by yourself because very few would have the patience for the era, and those that appreciate the era would turn their nose at the “inferiority” of these NES ports of the originals.

Jenn: Well I actually played this with my roommate soooo…

Sarah: OK, so I am now jealous that you have a roommate readily available to couch co-op games with.

Jenn and I each took one of the volumes to fire up our Switch consoles (or log out of Animal Crossing) and there is hardly any argument that both of these volumes are … volumes of Namco games.

Jenn: I won’t lie, I never boarded the Animal Crossing hype train- and my Switch has lately been used as nothing more than a medium to bring me more Picross puzzles- but I was keen to hop in my time machine and make my way back to the ’80s for this collection of games.

I approached this like I would a real arcade- running around looking at the fun pictures and titles and choosing the games I either knew already (who doesn’t love the familiar), or the ones with the cutest sounding names and prettiest title screen.

As Sarah said, the best way to describe this game is just…it is what it is; volumes of Namco games. The collection takes you back to a simpler time, one where a game only needed two syllables in its name (Pac-Man, SkyKid, Dig Dug) and for hours of playtime you only needed a handful of coins…and skill. A lot of skill.

These games are pretty unforgiving when compared to games of today’s standards. Once you’re dead, you’re dead, and if you don’t have any of the aforementioned skill then, well, you’re gonna be dead a lot. There’s no checkpoints and no second chances. The Switch version Sarah and I played does give you the option to “rewind” and undo some of your mistakes, but that’s heresy, damn it (and also let’s be real, I could rewind my death a thousand times and I still wouldn’t be good enough at any of these games to figure out how to stay alive).

Sarah: This was a mechanic that doesn’t make a lot of sense when I tried it in practice (and I only tried it for science) – I didn’t feel really in control of the rewind timeframe, so it felt really janky to try and find the moment that would save me from messing up. It was something that was great in theory, or maybe just put in so that it sounded great on the box, but it didn’t entirely work in practice and it was probably easier to save at the start of the level instead.

I fought tooth and nail to get volume 2 of the set because I wanted to fail at Galaga in the privacy of my home (because I thought failing at Pac-Man would be more embarrassing). I think Jenn would agree that the make-up of these collections tried to account for an equal balance of well-known, sequel-to-well-known, and what-am-I-supposed-to-do-and-why-am-I-doing-it. So I was all set for confusion. The most curious find for me was Mendel Palace – originally developed by Game Freak – has the player flipping floor tiles to push enemies to the corner of the screen, while also trying to collect loot-points from uncovered special tiles. It was a little beacon of intuitive gameplay in the chaos (seriously I don’t know what to do in Legacy of the Wizard.)

Jenn: I’m all for nostalgia, and anything that can take me back to the “good old days” is something I’ll probably cling to- but I found very little enjoyment in playing these titles by myself. Maybe because my time at arcades didn’t kick off until the ’90s, and was mostly dominated by that goddamn Simpsons arcade game- but I couldn’t really find a reason to play these alone.

Of the titles included in this collection, quite a few are 2-player; and it was in these I found a lot of fun. Dragging my roommate with me on my trip down memory lane, I was able to introduce him to games he had never played before (My roommate was still 16 yrs away from birth in the ’80s, so this was all new to him). Challenging each other to set a new high score, laughing at each other when one of us died and muddling our way through the controls and mechanics of these games was where all my enjoyment came from. We had no idea what we were doing with a lot of these titles (refusing to read the instructions probably didn’t help) but that competitive element of needing to beat more than just the computer, made these titles much more fun.

Sarah: These were definitely meant to be shared in trusted camaraderie, but I don’t know if anyone could justify picking these up purely to be a party game. Which is a shame because there is nothing that can technically fault these collections. They are responsive, representative, and have given the expected additional features that a lot of people expect in classic game collections (rewind features, display customisations, and save states). But at the price point, my sense is that you really need to be the person who wants these games to justify paying for them. I don’t think you can rely on the “party novelty” to recoup your spend.

Jenn: I’m all for party games, and I think there could be a lot of fun turning Pac-Man into a drinking game on a fun Friday night, but Sarah is right- there’s not enough in this pack to buy it on novelty alone. The games all look and sound great whilst staying true to their origins, but other than a few hours of fun with mates, this collection doesn’t bring enough to the table to justify the price tag.

When stuff like this comes out I always think nostalgia is a huge factor in the enjoyment. I can sit and play old PS1 games for hours because that’s what I grew up on- but playing the titles in this collection just didn’t give me that same feeling. However, if these games are your childhood; if you long for the days of school holidays spent in arcades trying to beat high scores, then this is for you. If you have good memories of these games, this collection will reignite that for you and transport you back in time. If not- then just wait for it to go on sale.

Sarah: Namco Museum Archives has given us both some faithfully recreated moments, and the team should be mightily proud. However, the collection has a hard time justifying its ongoing value, and the implementation of the standard accoutrement (save states and rewinds) feel more like a “checkbox being ticked” than well-considered. Where there is access to games of the same era through services such as Nintendo Switch Online for a smaller fee, it falls a bit further away from a justifiable investment and turns into a frivolous pursuit of curiosity that will probably rarely be played.