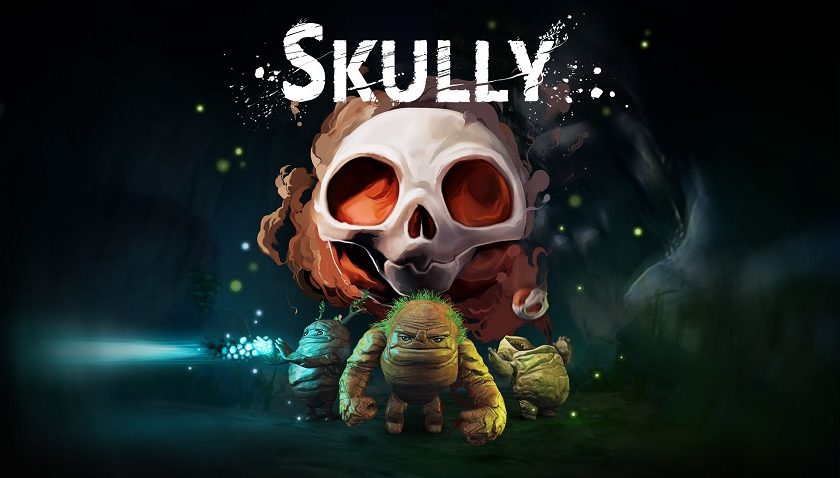 So, what do you do when you’re looking to go on a revenge-slash-reconciliation mission to confront your siblings and stop them from taking over the world? You take some clay, and you mould ‘er into Skully. (I’m sorry. It’s a bad X-Files joke, but I had to take the opportunity to make it while I could.) Skully, a 3D action-adventure platformer, is the story of a reanimated skull and his journey to help his creator Terry to restore balance to their mythical island. Terry’s elemental siblings are locked in a long-standing quarrel, and it’s up to Skully to roll his way through perilous terrains to attempt to talk them out of their fight and stop them from destroying the world. Well, Terry’s going to talk them out of it. Skully can’t speak. He’s just a skull.

Skully fills a genre niche that has sadly gone largely unattended for quite a few years now, remakes and remasters aside. The 3D action puzzle platformer somehow went out of fashion after the glory days of the early Spyro games, and Nintendo 64 games like Banjo Kazooie. My heart craves the simplicity of game mechanics that ask me to navigate through a level, collecting items like gems or musical notes (or in this case, plants) and just watching the story unfold. Technically, on paper, Skully fills that brief. Most of the game involves rolling Skully over, around and through obstacles, collecting objects on the way for an extra challenge, moving from checkpoint to checkpoint as he goes on his quest. But the pacing of the whole thing feels a little… off.

Eventually, Skully gains the ability to use pools of clay to manifest himself into different clay forms, which give him extra abilities and allow him to traverse new terrain and access new areas. The first, a big bulky being, allows you to attack enemies and punch through walls. The second, a clay monster that looks like a tree mixed with a cow, allows you to jump over long gaps and manipulate platforms around the environment, creating paths to new areas. The third, a weird rock elk, lets you jump high and move platforms even higher, adding a new level to the environment. Skully can create up to three of these clay forms at a time and can jump in and out of them, using them in tandem to solve environmental puzzles and move through to the next checkpoint. When it works, it creates some interesting and satisfying moments in puzzle design, but when it doesn’t it can get just a little frustrating.

As fun as it can be to roll Skully through the levels, transforming him as needed for a little extra health and substance, it can also get a little tedious. Some of the levels feel fluid and exciting, and it’s immediately apparent how the clay beings need to be used to progress a level, even if there’s still a challenge in executing the plan. But the game frequently falls short when it comes to direction, and I often found myself unsure of which direction I needed to go in, let alone how I was going to get there – which is a little annoying in a linear game. That occasional lack of signposting, mixed with camera problems, meant that I was often throwing Skully forward to certain death just to check that there wasn’t something obvious in the environment that I was missing. There was a strange element of difficulty that felt out of place in what is otherwise a simple game that I would absolutely recommend for younger gamers.

The lack of direction isn’t the only thing that makes it hard. Some of the platforming is truly difficult, and though the checkpoints are quite generously placed, sometimes one wrong jump can be your downfall. Given Skully is made of clay, pretty much everything is dangerous to him. Terry is essentially an earth deity, and Skully is created on a mud plain, but the elements of each of his siblings are dangerous to the little clay ball. Their powers are based in water, air, and fire, and their homes are filled with lakes, ponds, winds and lava, as well as enemies themed to their respective domains. The enemies never really feet like they posed a threat (which is good, given only one of Skully’s forms can really do anything about them), but the environments are constantly trying to kill you. The controls are responsive, but Skully is a ball, and leaving him idling on a hill will send him rolling into a puddle or lava pool of doom. It requires constant concentration, especially when the camera often refuses to cooperate. Sometimes it can feel like just getting to the next checkpoint is the only goal, and it doesn’t matter how you get there, and more than once I felt like I wasn’t going about things the way the game wanted me to, just because it was the only foreseeable way forward and I wanted to be done. It was tedious because I chose tedious way to solve puzzles, but I couldn’t see a better or more interesting way.

Ultimately, Skully has an interesting story, a gorgeous art style, and some mechanics that are great fun when they work. Sometimes the plot is a little unclear, but it makes enough sense overall that it can be forgiven. While it’s simultaneously too difficult and too easy, I’d still recommend it to anyone that wants to play a newer game with their kids that might evoke for them some of the emotions I felt playing Spyro as a child. The energy is the same, even if it doesn’t quite reach the same levels of polish. I commend it for what it tried to do, I just wish it didn’t have the issues with pacing and camera-work that might ultimately make it a little forgettable.

Skully was reviewed on PS4 with code kindly supplied by the publisher.