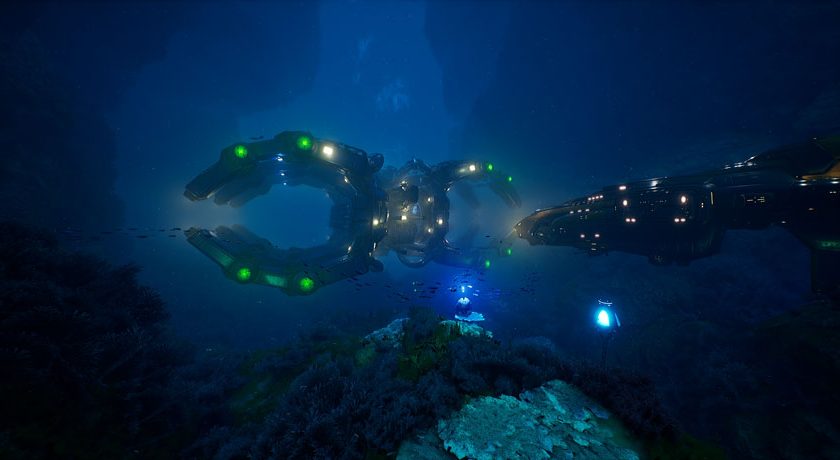 Have you ever had a game jolt you back well over two decades? When I first fired up AquaNox: Deep Descent, it felt like I was in two space-times at once; a 34-year-old frantically cramming in a few hours of gaming once everyone else in the house is asleep – the other, an 11-year-old taking mission by mission turns with his best friend to finally defeat the galactic threat presented by the villainous Kilrathi on an ageing beige PC.  AquaNox: Deep Descent piqued my interest with the promise of action-packed underwater combat akin to the classic space shooters of yesteryear and mostly delivers, provided the space shooters of yesteryear are exactly what you’re looking for in 2020.

Following a successful Kickstarter in 2015, Serbian developer Digital Arrow and publisher THQ Nordic finally launched this submarine vehicle shooter, the fourth in a series dating back to the mid-nineties. AquaNox: Deep Descent imagines a future where war has made the surface of Earth so uninhabitable that humans are forced to eke out an existence underwater, fighting factional wars over resources and technology in much the same way Mad Max would if he had a submarine and not a modded Falcon.  The player character is awoken from cryostasis amidst such machinations and must unravel the reason they were frozen in the first place. Despite promising four player co-op via online play, it was the solo campaign that I focused my efforts on. Engaging in limited conversations which further plot alongside doling out missions, trying my hand at rudimentary resource trading and battling with a frustrating interface to upgrade my burgeoning collection of subs form the bulk of activities on offer in AquaNox: DD outside of combat and exploration.

Right off the bat, it becomes clear that AquaNox: DD is the product of a protracted development with limited budget – a lack of cohesive art style in many character portraits, uneven vocal performances, repetitive environments and limited opportunities for interaction outside of blowing things up are par for the course. In fact, there were many times I had a sense of déjà vu during missions – surely I’d looted this cave before? Didn’t I JUST deliver an item to this station? It’s not only the environments that become repetitive in AquaNox; missions are minor variations on simple ideas and soon grate upon the player, compounded by the lethargic speed at which many of the early ships trudge through the depths of the ocean. In fact, for a good portion of its playtime, AquaNox feels as if it’s trapped in the first map of an open-world game, such is the limited scope of each location. Nostaglia goggles firmly in place, I could forgive most of these trespasses were it not for the combat which shows early promise before nosediving into the Mariana Trench.

My frustrations with combat are born out of a trio of issues which seemingly work together to create a whole worse than its individual parts. Basic enemy AI means that strategy is an afterthought and boils down to taking less hits than you deal out (perhaps the true distillation of ALL combat?), whilst a lack of weapon balance ensures some loadouts aren’t worth the time or effort. Limited resources also result in a constant scramble for particular ammo types and the snail-paced ship handling mentioned earlier only serves as the cherry on top of this particularly shitty footlong sandwich. AquaNox: Deep Descent is reasonably fun in short bursts, but extended sessions leave me longing to fire up a different title. It’s a shame really, as I think had I been running through this title on the Switch (or 20 plus years ago) I’d be quite happy to forgive a number of its shortcomings; sitting in my study battling with awkward keyboard and mouse controls, a useless mini-map and very overly enthusiastic boost buttons doesn’t come across as the ideal play scenario for this particular title.

AquaNox: Deep Descent is by no means a bad game, nor is it a particularly good one. It is instead exceedingly average, something for people like myself who carry fond memories of vaporizing intergalactic cat people to while away an hour or so at a time over a few weeks. If you don’t happen to fit inside this very particular demographic, then I strongly doubt AquaNox: Deep Descent is the best place to start within the genre.