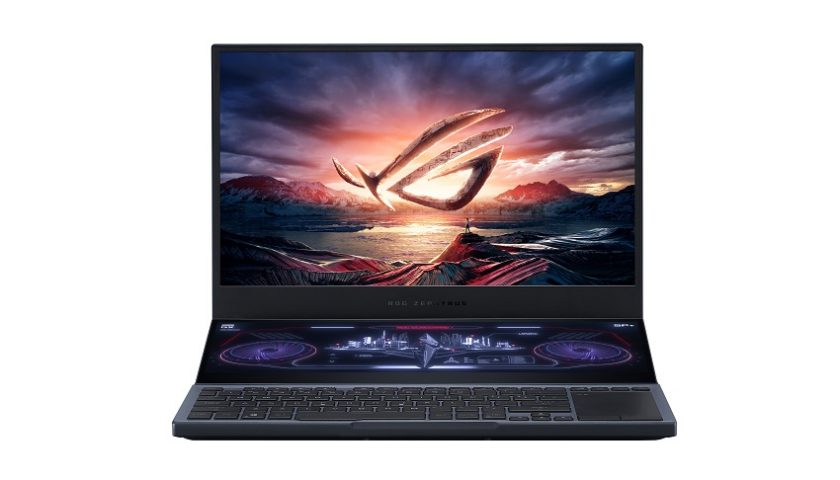 Have you ever just looked at something and felt your brain explode with a million questions, most of which have an underlying hint of “why”? That was how I felt the moment I became aware of the ROG Zephyrus Duo, and to say I was intrigued by this truly unique gaming laptop is an understatement. When closed, it looks like a particularly stylish laptop, ready for a professional to take on the go. But as soon as you open it, an extra screen rises to meet you like something straight out of a sci-fi dream, and the technicolour trip begins. There’s a lot to talk about around the specs of this laptop, but in terms of a pure “I am now the captain of this ship and this is my command module, we are now going voyaging among the stars” vibe, this laptop is truly unmatched. If that’s a feeling you’d like to have inspired in you daily, or you have a very specific set of needs that I’m yet to uncover, this may be the perfect laptop for you. If not, considering the price tag on this machine, it might be a little hard to justify spending the cash. But that doesn’t mean it isn’t undoubtedly an extremely cool bit of gear.

The design of this laptop is striking, to say the least, but overall mostly functional. Along with the 15.6” high-refresh FHD main screen (we’ll come back to that), is a touch screen sitting just down in front of it, known as the ROG ScreenPad Plus. It’s tilted 13° to allow for the most comfortable viewing, and also seems to be a nifty way to get a bit of extra airflow through to compensate for the computer’s power demands. It can be quite daunting the first few times you open and close it – the screen lifts and lowers automatically as part of the action, so it’s a little stressful waiting to make sure it’s going to do its job without damaging that second screen. Which it does, of course, due to some streamlined design. For something so elaborate it’s quite compact and ends up being about the size of a regular laptop despite the inclusion of that second screen. This is due to some flawed keyboard layout choices, but it does mean that the unit is extremely portable, especially given it’s surprisingly lightweight.

The ScreenPad is designed to be used for a wide array of purposes, and it really does feel like it can be tailored to your particular needs. You can move windows easily between the main screen and the ScreenPad and they’ll resize, and then they’re out of the way of whatever you’re trying to do while also not requiring you to do so much of a minimisation/maximisation dance. I found myself keeping Discord or a Messenger window open on there while I didn’t need it for anything else so that my chats were always accessible, but you could use it to house and manage streaming controls, keep a music player open, watch a tiny Netflix video while you work, utilise the small amount of touch screen to sign documents, take notes or draw pictures, or have a walkthrough or guide open while you play a game on fullscreen. The possibilities are endless, and there were definitely some conveniences around having it there.

It does, however, take up the space that would usually be dedicated to making a laptop keyboard comfortable. As a result, the keyboard is somewhat cramped, and the trackpad has been moved up beside it. There are some positives about the keyboard – the keys are incredibly tactile, and they feel great to type on, as well as looking slick. The backlighting of each one can be customised, and there are some good-looking effects to be had that are pretty, but not intrusive. In an absolutely groundbreaking turn of events that feels like it should be standard but isn’t, this keyboard has a shortcut dedicated to the Snipping Tool. It’s so easy to take screenshots. Sadly, you can’t really type on your lap, and if you’re left-handed, I’m not sure how you’re supposed to comfortably use the trackpad. It’s possible that they’ve presumed that everyone who uses it will be putting it on a desk and using a separate mouse with it, but it still feels uncomfortable. The compact layout means there’s also no Numpad, but the trackpad will turn into one with a very firm push of a button. This button is somehow hard to hit when you want it and easy to hit accidentally when you don’t, and it isn’t an overly responsive Numpad, but it’s something. It just means you’ll need an external mouse if you want to enter values and scroll at the same time.

So, some of the design elements of the laptop left me with that big “why” question, and there is a huge, glaring answer – this laptop is powerful and graphically incredible. That FHD screen with a refresh rate of 300Hz/3ms didn’t once fail to deliver a clear picture, and lag wasn’t even a passing concern. The Zephyrus Duo is sporting an Intel® Core™ i9 processor that feels truly next-gen, and the beauty it effortlessly pumped out when paired with the NVIDIA® GeForce® RTX 2080 SUPER™ was enough to make me, a person who often doesn’t even think about graphics, weep. This laptop made me understand why someone might crave that crisp resolution – it looks phenomenal.

Not once did this machine struggle with any game I threw at it. Shadow of the Tomb Raider, Grand Theft Auto 5, Gears 5, Forza Horizon 4, Civilisation VI, all with everything turned all the way up, and it was ready for it. It was consistently clearing 60fps in every benchmarking test, and if I hadn’t messed up when I was transferring the screenshots over to write this review, then you’d be able to see that. There was also a beautiful photoshoot of Lara Croft looking her most badass, so I’m sorry I’ve robbed you of that too. But it’s stunning.

Despite a dedicated cooling system that can be customised depending on your activities and priorities, this beast of a machine does heat up. It’s not surprising, given the standard to which it’s performing, but it is also extremely hot, and loud even on the “Silent” setting. Don’t put this laptop on your lap to use it (which you couldn’t do anyway, your hands would cramp), and possibly get a table with an extra fan to rest it on, and it will eliminate the problem, but it is certainly a problem. The high performance also comes at a cost to battery life, with the laptop only lasting about an hour with a game running, and between two and three while browsing – but that’s pretty par for the course with gaming laptops.

The ROG Zephyrus Duo is a mish-mash of exciting features and baffling omissions and choices, and ultimately the decision around whether or not it’s going to suit your needs is going to be up to you. If you have a separate webcam (the laptop doesn’t have an in-built one), you’re going to use it at a desk with extra cooling and you have a separate mouse, you will be able to mitigate the problems with this laptop and just enjoy the raw power and convenience of that extra screen. If you value portability and don’t want to need extra peripherals, it’s a lightweight machine but you will encounter other issues with heating and trying to use the trackpad. It’s definitely an exciting look into some of the technology future laptops might incorporate, and it shows how powerful a gaming laptop can be – we just need to find a way to harness that raw power while keeping all the important things that make a laptop functional for everyday use. I’m not sure this particular machine achieves that balance yet, so it might be a hard sell for the price tag.

You can get all the possible specs for the ROG Zephyrus Duo series here: