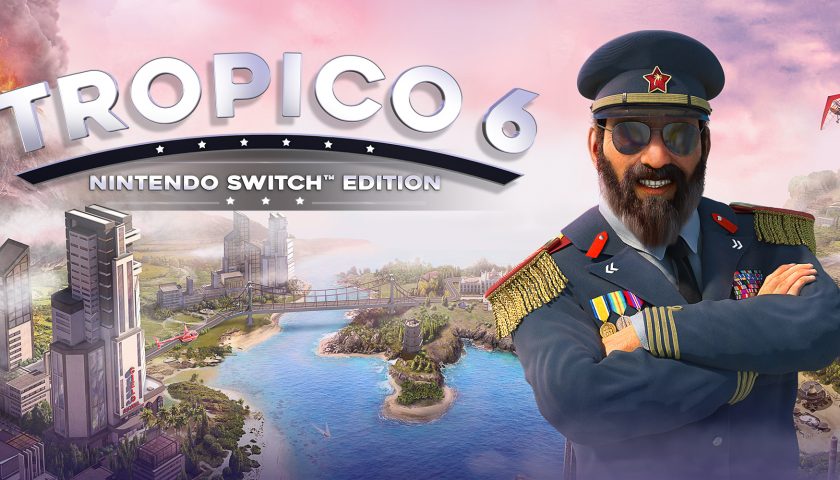 “El Presidente, I come bearing wonderful news.  I know you are an incredibly busy man.  Trying to run the country between golf games, mani-pedis and TV time is not easy. Well, you now can ensure our nation receives the greatest guidance of anywhere on the planet from anywhere on the planet.  Utilising your Nintendo Switch you will be able to set policy, decide what to trade and with whom, and where to place the statues glorifying your great and wonderful leadership, as well as schools, factories, housing and all those other things of minor importance.  Now you can fulfil your destiny to make Tropico the greatest nation on the planet.” – Penultimo

For fans of the Tropico series, the opportunity of being able to play the management sim anywhere and at any time is an enticing one.  While Tropico 6 was released on PC, PS4 and Xbox One last year, a new port has just been released for the Switch.  I took it for a test drive to see how it feels to have control of a small island nation in the palm of my hand, and while there are some small issues with how the game handles, the time I had was rather enjoyable.

As with the other versions of Tropico 6 previously released, you have the option to undertake missions that task you with different objectives, such as turning your tropical island into a high priced tourist trap, or you can just make the island your own personal sandbox and build up your nation at your own pace, carefully balancing your expansion to ensure you can provide everything your people need to thrive and be happy, or held firmly under your military booted heel.  As you build up your island nation you will guide it from humble colonial beginnings, through the dangers of World Wars and the subterfuge of the Cold War, and up to the modern-day period, where you can create your version of North Korea and attempt to be a player in the world of nuclear weapons.  If that’s your thing that is.

As with many games on the Nintendo Switch, the ability to play the game anywhere is one of the biggest drawcards to the Switch version of Tropico 6.  The problem is that the lack of power the Switch holds in comparison to its contemporaries shows while playing the game.  Long loading times, frame rate drops and chugging when panning and zooming the camera as well as short freezes as the game autosaves do impact on playing the game, however, these issues are not a deal-breaker, and will not prevent anyone from having an enjoyable time in their own little banana republic.  As you zoom in more it is also clear just how much of a graphical downgrade Tropico 6 has undertaken to get it working on the Switch.  Again, it is not something that will detract from the playing experience, but if you are the sort of person that wants to see your meticulously planned nation in the highest fidelity possible you may want to look at getting a different version of the game.

When it comes to controlling the game, the Switch port makes use of the same radial menu utilised on the PS4 and Xbox One, allowing the user to access the various menus and sub-menus without too much difficulty.  It can take a little while to get used to the menu structure, but you will soon be flipping through the menus with ease, even if you do struggle to remember which construction category the garbage dump resides in.  The one area I constantly had difficulties with was the placement of roads, or rather, ensuring they went where I wanted them to go.  Far too often I would find myself having to move my newly constructed building because the game would not allow me to place a road on a perfectly good tract of land.  It soon became apparent that the best method of play was to always build the road first and then fit the buildings around the roads.  Laying the roads can also be an exercise in frustration, especially if you are like me and prefer a nice orderly grid pattern.

If you are the sort of person that wants the best looking Tropico 6 you can get then you will be better off experiencing the game on other platforms.  If you can take the hit to the graphical level and overall performance of Tropico 6 on the Switch then you will get plenty of mileage out of this game.  Being able to pick up your nation and continue on no matter where you may be, allows for players to play in smaller bursts as it suits them, whether that be on their lunch break or while waiting for your kid to finish their sports training.  Your nation awaits you, El Presidente.