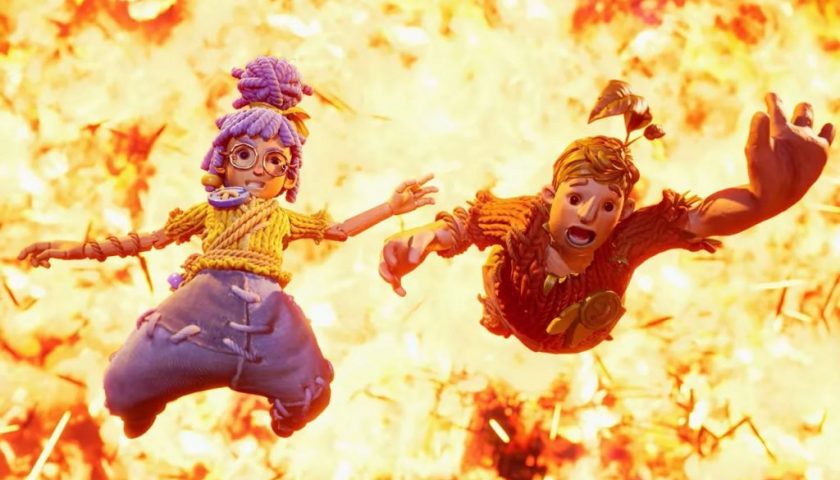 It Takes Two – Double The Delight

Josef Fares and his team at Hazelight studios have one goal in mind, to develop top tier, dual protagonist adventures. It began with the mind-bending, and incredibly inventive Brothers: A Tale of Two Sons, a game that impressed everyone with its wonderful two-player look and feel, despite all being controlled by one player and their two thumbs. 2018’s A Way Out brought the action to two players, on the same couch, or online, forcing you to work together to escape prison and evade capture, and while 2021’s It Takes Two, doesn’t evolve the formula much, it’s by far and away, the greatest execution of Hazelight’s ambition to date.

It Takes Two is the adorable, yet, surprisingly dark tale of a couple on the brink of divorce. Cody and May, a constantly arguing couple, agree to split and decide it’s time to tell their daughter, Rose. Rose, understandably less than impressed by the prospect of being a child from a broken home, creates dolls of her parents and tries to fix their relationship through role play. Rose’s tears have a magical effect, and suddenly both Cody and May find themselves magically infused into the dolls. Dr Hakim, a very creepy relationship therapy book, who, when not excessively gyrating, takes on the job of restoring the couple’s relationship, and through a range of quite outlandish means, begins to unravel the mess that is Cody and May’s relationship, slowly, rekindling the lost spark between them.

The narrative, while layered in romantic comedy tropes, does take a turn to the dark side on occasion, with the reality of the situation pushing beyond the attempts at humour. Whether or not you’ve been a part of a broken family yourself, this may be emotionally taxed by some of what transpires. Needless to say, as is the case with most rom-coms, light begins to poke through the darkness, and a truly heartwarming narrative begins to emerge.

It Takes Two has to tread a very fine line, given its subject matter, and given the gameplay systems at work. The game is clearly being pitched towards couples, but by virtue of its design, does try to test the relationship between the players. Many scenarios require one player to depend on the actions of the other, and when players abilities can sometimes vary wildly, be prepared to make fun from the multiple failed attempts of your player partner, as opposed to being frustrated by them. Level design is excellent, however, with the crazy scenarios lending to some fascinating platforming components. Early game levels require players to coordinate themselves as one shoots nails into timber for the other to jump and swing on, while late-game levels get a little more convoluted. Of course, there’s the constant temptation to toy with your friend/family as you withdraw your support after they’ve committed to a jump. I for one plunged to my death several times when the help I was supposed to receive was pulled away at the time of most urgent need, to the delight of my wife. Failure is barely punished either, with respawns being almost instantaneous, allowing one, or both, players to get right back into the action.

It Takes Two shines in terms of its production values. The ‘Honey I Shrunk The Kids’ inspired level design is fantastic, while the characters and their surroundings look sensational. The magical component of the narrative sets up some outrageous gameplay scenarios, all of which shine in both the audio and visual spaces. The voice-acting, even for creepy Dr Hakim, is of the highest calibre, while the soundtrack elevates and subsides with the momentum of the game, in ways that most games simply can’t capture.

Though pitched as a couch co-op experience, It Takes Two does support online multiplayer as well, make sure to mic up for this though, because it’s the interactions and planning from both players that make the experience the marvel that it is.

Where It Takes Two shines brightest in comparison to Hazelight’s previous work, A Way Out, is in the consistent execution in the gameplay space. A Way Out certainly had excellent setpieces to engage with, while others fell flat in comparison; It Takes Two doesn’t suffer from this issue, with every puzzle, or platforming sequence, expertly straddling the line between fun and sufficient challenge, whether you’re with an equally capable, or relatively inexperienced friend/loved one.

Dr Hakim might give you some nightmares, but the experience of playing It Takes Two is enjoyable on a level that most games simply cannot achieve. It will make you laugh, cry, and potentially even reflect on your own life situation in ways that resonate like few games ever have. The gameplay itself is consistently engaging, the puzzles not excessive, while the look, sound, and feel of the game are equally as striking. It doesn’t outstay its welcome, but you still can’t help but want more of it. It’s the best title from Josef and his team, and with their history, that’s most certainly saying something.

It Takes Two was reviewed on the PS5/Xbox Series X with code kindly supplied by EA.