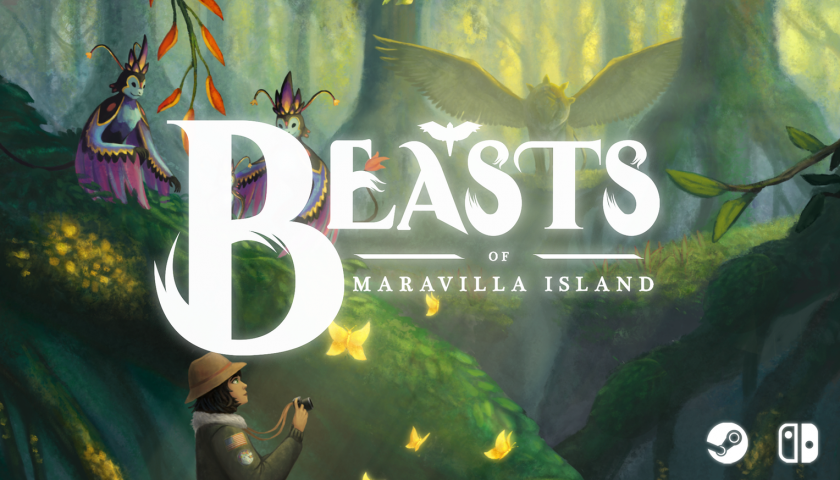 As is evident by the existence of New Pokemon Snap, fans of the old N64 classic have been craving a new monster snapper for many years now. But while Snap has the benefit of being a part of the Pokemon franchise, it’s still kind of the bare minimum – more of the same. It’s still level-based, still on rails. Beasts Of Maravilla Island wants to challenge that notion at least a bit by giving you space to wander around, check out the wildlife and take a few photos along the way.

Set on the mythical Maravilla Island, you take your first steps on the beach of this island that is unspoiled by humanity’s touch. It’s a pretty sight. A lush forest towers over you as creatures both alike and unlike animals, we already know to wander about. Most creatures aren’t overly bothered by your presence – some more curious than anything.

It’s a pretty chill experience. There are 3 biomes to wander through, each with its own distinct flora and fauna. The game has a journal to fill out for the completionists out there – 10 forest plants, 6 insects, that type of thing. The only thing that’s strictly “needed” however is to interact with both the world and a signature creature of each biome using the tools at your disposal – namely your camera, your ability to whistle and the occasional item to pick up and put down / throw.

It’s here where the personality of the creatures comes out the best, easily the highlight of the game. Interacting with the Otterdile as seen in all the marketing material couldn’t help but bring a smile to my face. Happily, it isn’t just for show, either – there is a narrative through-line pushing you along the paths of Maravilla. It’s not the grandest story, but it has heart and is worth seeing through to the end.

While the game has a little jank and a few rough edges graphically, there’s definitely an air of “the work went in where it counts” to Maravilla. The camera is basic, but has that satisfying physicality the genre has come to embody. The creature design is stellar and vibrant. The pathways around the space are pretty generic, but they get you to the point of the game: taking photos.

I spent my time on Maravilla Island through the power of my Nintendo Switch – or, should I say, the lack of power. While the island and its inhabitants are quite beautiful with their particle and lighting effects, the Switch just can’t handle it. I’m well and truly not a framerate person, but from beginning to end I doubt it went above 20. Watching footage of the game online, it’s easy to see how much better the experience is on a PC that can handle the fidelity. At least at the moment, I’d avoid the Switch version.

Photography games have been having a renaissance in recent times – Umurangi Generation, Shutter Stroll and of course New Pokemon Snap. While not necessarily blowing any expectations out of the water, Beasts of Maravilla Island sits steadily among its peers as a charming experience made by a small team. A great 2-3 hour experience for those that just want to chill out and take some pictures after work, or sit down with the kids and enjoy the wonder that is Maravilla Island.

Beasts of Maravilla Island was reviewed on the Nintendo Switch with code kindly supplied by the publisher.