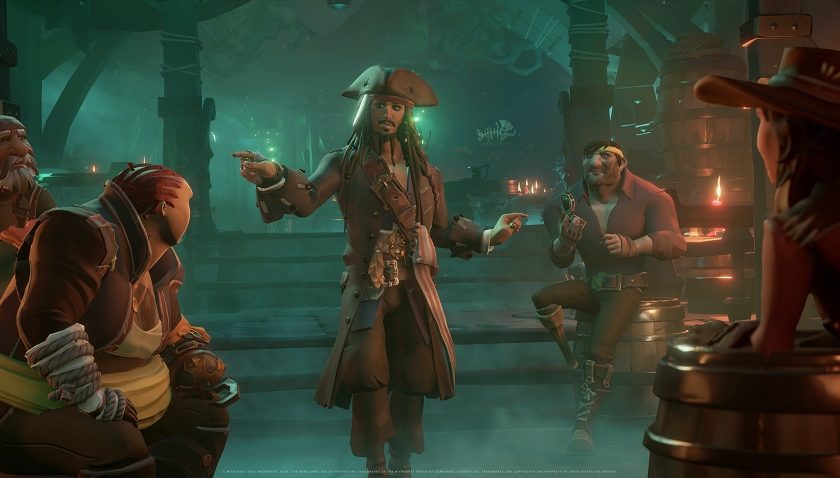 Sea of Thieves Joins Disney for A Pirate’s Life

Video game/movie crossovers are not a strange or uncommon thing. They pop up on a semi-regular basis with a splash of celebrity endorsement and a pinch of pop culture to try and convince you to part with some of your hard-earned. What is uncommon is that these crossovers are handled with care. They usually scream “rush-job” and often have tenuous links to either of the brands being represented. This is what makes Sea of Thieves: A Pirate’s Life so special. This merging of Rare’s wonderful Pirate simulator with The Pirates of the Caribbean is not even close to being a cheap cash grab. This is a true merging of pop-culture icons to create something new and exciting for fans of both properties.

I was lucky enough to watch the recently released developer video on A Pirates Life with a few of the members from Rare Software and the first thing that was immediately evident was the excitement on their faces. This was anything but a quick cash-in. The whole presentation was absolutely steeped in the joy of the developers and their delight at being able to work with this famous franchise. The way they spoke about talking to Disney, about including Jack Sparrow and Davey Jones in their world, about the challenge of recreating the Black Pearl, there is just no way that their enthusiasm was put on or faked for the camera. This was clearly a team of people that have done something they are immensely proud of and can barely contain their eagerness for gamers to get their hands on the final product.

So how does Jack Sparrow come into Rare’s world of swashbuckling pirates? Well, being Jack he stole something he shouldn’t have and it transported both himself and Davey Jones into the pirate realm. Davey Jones is apparently unhappy that people don’t actually die in this world and sets out to fix that problem, while players get to hang with Jack and hopefully save the day. It all feels very much in keeping with both franchises and it is clear that there was a lot of thought put into the amalgamation. What’s better is that this is story content that caters for both single players and those with larger crusty crews of privateers. So no one is left out of this hefty new expansion.

There was a lot of effort put in by the Rare team to ensure that Jack and the other denizens of the Pirates of the Caribbean franchise acted in an authentic manner. From multiple meetings with Disney to multiple trips on the Pirates Disney ride to hiring the actual stunt double for Jack in the movies, it seems that Rare to every step possible to ensure the crossover would remain true to the source material. From everything I have seen they have certainly achieved that goal. Every moment, every swagger, every facial expression, there is no doubt that you will be sharing a ship with Jack Sparrow and not some pale imitator.

The entire expansion will be broken up into multiple chapters, the first of which sees players travelling to an island of dead pirates waiting for rescue to help bust Jack out of jail. The story will continue over multiple new areas to the game including a stunning underwater section where players will come up against aggressive sirens and stumble on the wreckage of none other than Jack’s own ship, The Black Pearl. The underwater sections were seriously impressive in the demo, stealing the show with their stunning graphics and new gameplay mechanics. I can see Sea of Thieves fans, both old and new, getting a massive kick out of these new areas especially, they really capture that classic “pirate” style that is so important to a game like this.

Sea of Thieves continues to be a rolling success story. After a weakish start, the game has gone from strength to strength and this expansion looks to continue this trend. There is a risk when doing something like this that it can cause a fan backlash, but I feel like not even the ghost of Johnny Depp can derail this expansion that has clearly been created with a love and passion for not only Sea of Thieves, but the Pirates moves as well. Rare has really shown off their talent here and I have no doubt that these additions will be welcome with open arms when it launches for free in a couple of days time.