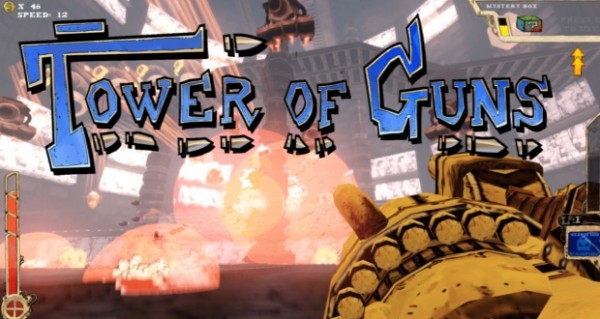 What if Serious Sam was a rogue-like experience? That is the question that Tower of Guns attempts to answer and the result is a fun, if not quite essential experience. The basic concept of Tower of Guns is to progress through randomly generated levels, shooting enemies, collecting loot and unlocking new weapons and bonuses. Of course as with any Rouge-like game once you die it is back to the start with all your unlocks still in place.

Where Tower of Guns separates its self from other Rogue-likes is that it is basically a twitch first person shooter. Circle strafing, double jumping and sprinting to avoid enemy fire are all essential if players wish to make it through the tower. Players who are familiar with games such as Serious Sam and Shadow Warrior will be right at home here. The combat is fast, frantic and entertaining. Perhaps the only letdown is the actual enemies who are all rather bland. Basic variations on cannons and mines are basically all the game has to offer in the way of enemies so they all begin to blend after a while. The bosses are more interesting but still nothing to get excited about.

The other problem is that the game seems to lack the intense challenge that other rouge-likes offer. Tower of Guns isn’t easy by any means but it is quite conceivable to unlock a large percentage of the perks in the first play through. If you compare that to something like Rogue Legacy where players would be lucky to unlock one upgrade on their first trip it seems a little on the easy side. This ease of unlocks may shorten the game’s play time and relegate it to the “virtual dust bin of finished games” quicker than it perhaps should have.

In the end though there is a lot to like about Tower of Guns. The combat is fast and entertaining, the unlocks are fun and some of the levels are quite a blast to navigate. The other big bonus is for Playstation users the game is currently apart of PS Plus for April so that makes the price just right. If you enjoy twitch shooting then you could do a lot worse than Tower of Guns, just don’t expect to be playing it for much more than a couple of weeks.