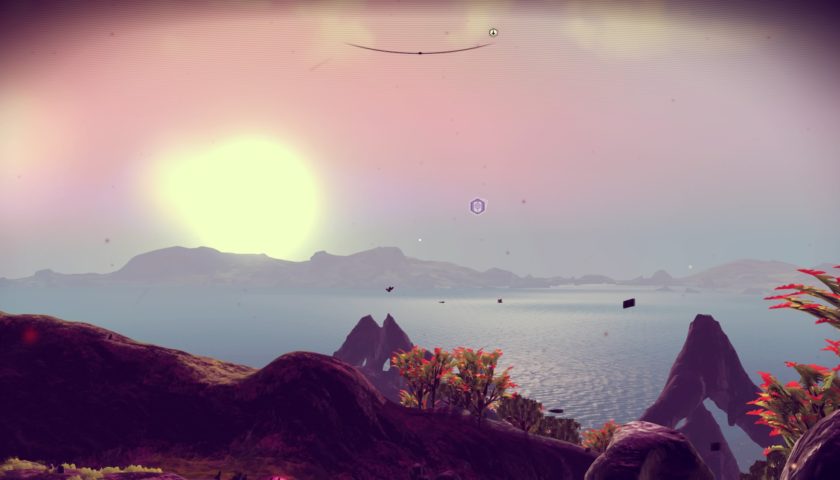 Come on a journey through the stars and planets of No Man’s Sky. Welcome to Player 2’s Stories from the Universe.

Stories from the Universe: The Stars My Destination


Apologies if this entry in our series seems very self-indulgent, but I’ve had an odd couple of weeks leading up to the release of No Man’s Sky. It has felt as if the universe has been in a conspiratorial mood, placing many things that bring to mind memories of my paternal grandmother who passed 15 years ago, Barbara, in my path. My recollections of her are intertwined with the things that she loved – to this day, I can’t hear a Queen song without being jolted back to the feeling of thumbing through her music collection as she waxed lyrical about the majesty of Freddie Mercury and “that voice!”. Just last week I was thrown onto a drama excursion with work after another teacher had to pull out, which ended up being a trip to see We Will Rock You! – Ben Elton’s Queen musical which combines some of the best rock songs of the past 40 years with one of the worst scripts I have ever seen performed live. This distaste didn’t stop a feeling familiar to anyone who has lost somebody close to them – a desperate wish that they could return, if only for a moment, to share something with you.

How does any of this relate to No Man’s Sky you ask? Barb’s other great love besides music was fantasy and science fiction literature – a card-carrying member of Mensa, she was an extremely intelligent woman who helped shape my reading habits through authors like J. R. R. Tolkien, Isaac Asimov, Frank Herbert and Kurt Vonnegut. A chance to journey through the stars from more than just the pages of a paperback would have caught her imagination, so it felt fitting that my coverage of No Man’s Sky honour her in some way. Given the ability, I thought it would be somewhat cathartic to find a system and planets that, to me, embodied my memories of her and name them accordingly.

After letting the minimalist story drag me along for a few hours, I found what I was looking for in the third system I warped into. Gorgeous from orbit, as I came in to land on the planet that would become my grandmother’s namesake I was overcome with how strongly it contrasted against those I had visited previously – where they had been barren and uninviting, instead I sped towards lush pink and orange flora dotting an emerald and amethyst landscape, with dark expanses of water ripe for exploring.  The rustling of swaying plants, soothing piano chords, the joyous cries of alien creatures – each sound enveloped me as I emerged from my ship, keen to explore. What I found was a bountiful planet rich in resources, gold deposits spilling over the surface while caverns lit by luminescent fungi were littered with Vortex Cubes.

As I took in the sights and sounds, No Man’s Sky found ways to evoke further recollections of my grandmother. With my Life Support System throwing out a storm warning I took shelter in my ship from the now minus 60-degree Celsius temperature, the gentle drone of the cockpit combined with the hammering rain on its outer surface created a lovely juxtaposition. Much like any intergalactic traveller exploring such occasionally hazardous atmospheres, my grandmother often wore a breathing apparatus – a sufferer of emphysema thanks to years of smoking, she was frequently attached to a ventilator which required close proximity to a power outlet. We spent many hours talking through the mechanical hum that mixed with her speech as the machine worked to ease her laboured breathing.

Even the goofier results of No Man’s Sky’s procedural algorithms touch upon a memory. The phallic protrusions occasionally present in both the flora and fauna of No Man’s Sky would have been a source of mirth for a woman who in her later years would watch saucy sci-fi show Lexx and jokingly point out how many props in the show, including the titular ship, were clearly shaped like a penis. As a teenage boy, I remember feeling embarrassed in the moment, but years later I can’t help but smile picturing the shocked look on my Dad’s face as his elderly mother proudly demonstrated her familiarity with the male anatomy.

Regrettably, this is where my most vivid memories of my grandmother begin to dry up, a combination of distance – she lived well over 7 hours away for most of my childhood – and the steady march of time clouding my mind. After the experience of writing this, I think I’ll be putting No Man’s Sky down for a little while. For now, the infinite possibilities offered by its finely honed algorithms serve in stark, melancholy contrast to things that are decidedly impossible. To my grandmother, Barbara – I wish we could have sat in the cinema together like we’d planned and watched your beloved The Lord of the Rings brought to life (even if you would have been upset that they cut the songs). I wish I could listen to your exceedingly polite criticisms of We Will Rock You! and watch you surprise everyone as you continued to embrace new music. I wish I could call to tell you about the grandchild you have on the way, carried by my wife whom you never met. As I write this article, I wish you were so I could put a controller in your hands and watch you get a chance to explore the stars and distant worlds you loved to read about so much.

If you, galactic voyager, happen to warp into the Henderson system, make sure to pay a visit to Barbara. I promise she’ll take care of you.

Catch the rest of Player 2’s Stories from the Universe at our handy landing page.