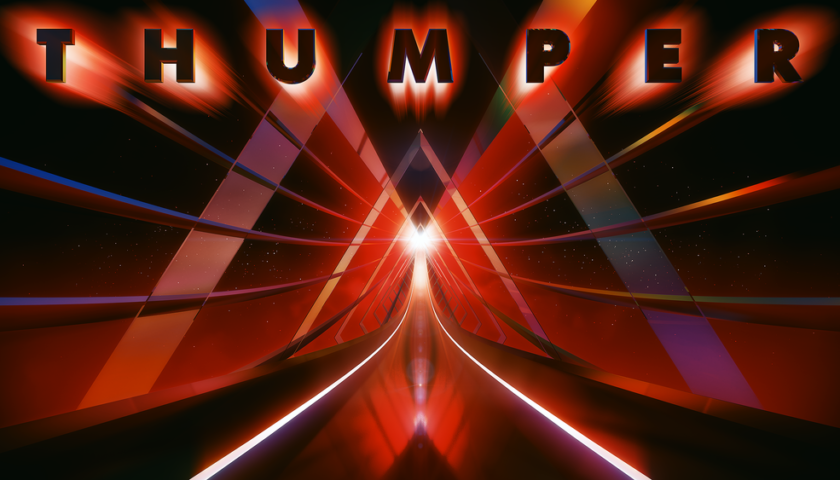 At the time of typing up this Blockbuster Review, my right thumb is bandaged to cover a nasty blister. For someone who doesn’t engage in any form of manual labour without wearing heavy duty gloves, the fact that I received this through playing a video game feels like the ultimate betrayal. For anyone who has played Thumper however, this should come as no shock.

Billed as a ‘rhythm-violence’ game by developer Drool, Thumper fully lives up to this tag. Players control a reflective beetle speeding along a series of rails and must turn, jump and glide to avoid obstacles whilst making sure to ‘thump’ any glowing note panels that appear underneath them. Whilst the concept of notes speeding towards the bottom of the screen is as old as the rhythm genre itself, there is no other entry quite like Thumper. Whereas most rhythm games bank on involving more buttons to increase complexity, Thumper sticks with a minimalist control scheme throughout – on the PlayStation 4, only the analogue stick and the X/R1 button are required. What ramps up is the speed and intensity of the music which saw me mashing the X button much harder than is ever required. Thus the ‘violence’ of Thumper plays out in the real world as self-inflicted injuries, a direct cause of the assault on the senses both the visuals and soundtrack carry out on the player, especially those who choose to experience Thumper in VR as I have.

Rhythm games can live or die based on their soundtrack, which might make it worrying to hear that I wouldn’t call the music memorable. Hypnotic, jarring or savage perhaps, but I can’t say I’ll be humming any tunes from it in the coming weeks. This isn’t some licensed hodgepodge of tunes however, but a customised set of tracks that mesh wonderfully with the strange, unsettling visual landscape Drool have created. When the difficulty ramps up, the music and sound effects help push the player towards a state of flow rather than distract by drawing attention to themselves.

Playing solely in PSVR, I’ve only been able to take Thumper in short bursts of 30 or so minutes, clearing a level and putting it down for the day. With 9 levels, the game can be finished in 5 or so hours depending on skill level, which might seem short if your preference is to ignore leaderboards and forego chasing higher scores in the more difficult Play+ mode. That seems to go against the spirit of the game itself, which aims to push players to their sensory limits.

Thumper is a unique, challenging and overwhelming experience further enhanced by VR compatibility. I encourage anyone remotely interested by the words I’ve written here to pick up a copy on either the PC or PS4.

Thumper was reviewed on a standard PS4 system using PSVR.