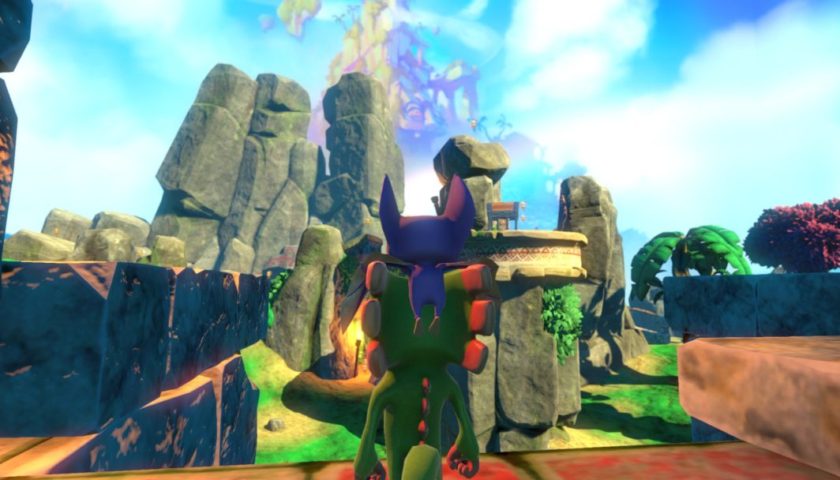 The golden era of the Nintendo 64 brought a wealth of top quality 3D platformers. Donkey Kong 64, Mario 64 and of course Banjo Kazooie. But since those times things have been pretty sparse for the genre. Barely a notable release in the once dominant playstyle. Hopefully though, things are about to change because we are only a couple of weeks away from the release of what could be the beginning of a 3D platform resurgence. That game is the kickstarted Yooka Laylee and from my time with it, it brings all of the things that fans expect to see.

So far my time with Yooka Laylee has been a wonderful nostalgia trip. This game is honestly a Nintendo 64 game with better graphics and a second thumbstick. I immediately felt at home with the structure, moves and movement that the game had on offer. The game is set up like the classic titles yore, with a hub world that leads to different levels where items are earned (in this case book pages called “Pagies”) to open even more worlds. It is a system that was pioneered by Super Mario 64 and it still works well to this day. There is one noticeable difference here however that adds a nice new twist to the mix. Once a certain amount of Pagies have been collected there is the option to open up a new world or remix the existing one. Remixing the existing world adds more collectables to the level as well as opening up new areas and adding new sections. There is no penalty for choosing to move to the next level either as you can always come back and remix the level at a later time.

I have been playing the game for quite a few hours now and still haven’t really left the first world. There is a lot to do in each area with a host of puzzles to solve, platforms to reach and collectables to collect. The first world is a tropical island style level, something that has been seen in countless games from this genre, so it feels familiar but at the same time, there is quite a bit of challenge on offer. In fact, at some points, I threw my hands up in frustration and moved on, lest my anger get the best of me. This leads to a little problem I have with the game early on. The game isn’t very good at telling you if a solution can be reached with your current move set. On one area I spent ages trying to get an item before giving up. However, once I gained access to a new move it was a very simple matter to pick it up. It would be nice if there was some sort of clue as to whether a puzzle or challenge was solvable with my current move set, that way releasing the frustration of time wasted.

Perhaps the only other issue I have with the game is the camera. Dear lord, it is frustrating at times. Sadly this seems to be one thing brought forward from the N64 era that really should have been left there. I felt myself fighting the camera at the most inopportune times and more than once did this thumbstick wrestling cause my untimely demise. I hope this gets patched on final release because it is the one area I see putting off players more than any other.

But apart from that issue, I am enjoying my time with Yooka Laylee. It feels like a wonderful return of a simpler time. I am not sure how players who didn’t experience the N64 era will feel about the game but for people like me, it is a welcome return from an old friend. I can’t wait to play more and see if the game holds more surprises.

Stay tuned for my full review in the coming weeks but in the meantime know that things are looking pretty good so far.