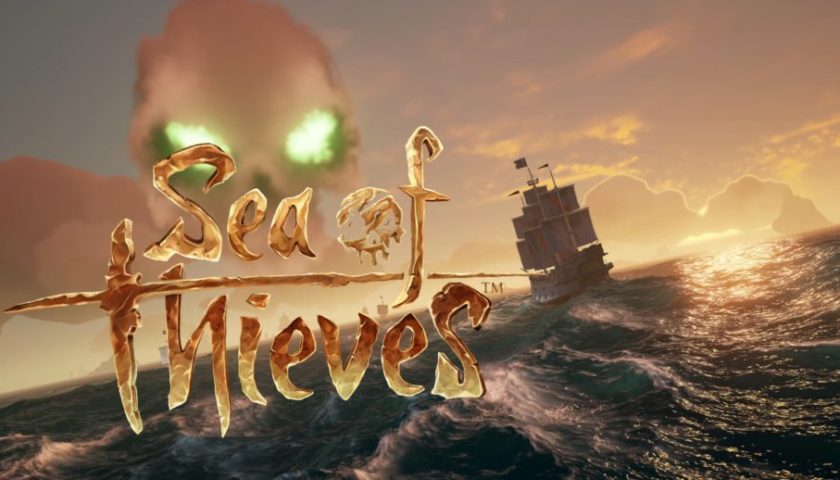 The story of Sea of Thieves tells two different stories; a tale of two games. One talks of a true technical masterpiece, a sandbox experience where you and a team of swashbuckling pirates can traverse the open seas in search of antic-filled fun and adventure. Where sailing the wild seas together with your crewmates is an engaging and fulfilling experience in and of itself. But the other tells a tale of missed opportunity. One where, in its ambitious attempt to craft a world where player agency is paramount, Rare has left too much to the imagination. Through the veiled chaos of cooperative play it’s more easily dismissed, but when playing solo, the dearth of narrative hooks and deep systems becomes readily apparent. By relying on players to create their own stories, and not offering meaningful enough rewards and progression to make it seem worthwhile, Sea of Thieves is a sandbox that, like other sandboxes, is great fun to enjoy with friends, but feels pretty flat on your own.

Sea of Thieves puts you–either with a crew or by yourself, depending on which you choose–into a large, open world dominated by open ocean and dotted with islands, ranging from tiny atolls and sandbars with a handful of palm trees to large, mountainous forts complete with fancy rock art, enemy encampments and huge cliff faces. And what an utterly stunning world it is, too. The full day/night cycle and dynamic weather systems show off the game’s frankly jaw-dropping lighting with stunning effect, which has, on more than one occasion, proven more than enough to make my entire crew stop what they were doing to watch the pink and orange sunset reflect off the raging ocean as it went down over the horizon. Despite some weird performance hiccups on the Xbox One X, the PC version tested perfectly, running like a dream.

Navigating the ocean is a task in itself, and serves as one of Sea of Thieves strongest points. Whether you’re sailing solo in the Sloop or piloting the larger Galleon, there is always something to be managed. On your own, you’ll be taking care of everything; from raising the anchor and manning the sails to repairing the hull while being battered in a storm. With a crew, you have to take on a more refined role, relying heavily on teamwork and communication to keep the boat afloat and sailing in the right direction. While both vastly different experiences, sailing in both solo and coop is just a true joy. Juggling everything often be an intense but rewarding experience, which also makes the peaceful moments all the more something to savour.

Equally as impressive, though harder to notice, is the game’s audio, which offers plenty of cues for when something bad might be going down. In a storm, breaking waves and crashing water can give way to the cracking of wood as your ship struggles to hold up in the wild conditions. It’s also quite an astonishing experience to be alone on an island, watching on as your crew chases down a nearby ship, only to hear them violently break the silence by unleashing a volley of hardened steel balls and gunpowder at the scurvy knaves, blasting their ship into splinters. It’s truly spectacular.

Moments like this are what Sea of Thieves thrives on; players interacting with players and creating their own stories. By giving you the bare essentials in terms of context, it gives the best opportunity for player stories and emergent experiences to occur more naturally, and there is no shortage of these moments. You might be digging for treasure on an island when suddenly a large Galleon appears on the horizon. Are they headed this way? Did they spot the ship? If they come this way, will they be dangerous? What about that storm nearby, is that also coming in this direction? The feeling of freedom that comes with “knowing you’re alone” in a vast space, that sense of peace, is suddenly shattered, and Sea of Thieves leans hard into the question “what will you do next?”

However, this is a double-edged sword, as the open-ended nature of how these emergent scenarios play out lends Sea of Thieves an impression of depth that it never fully earns, which is largely where the game’s more disappointing aspects start to become clearer.

A large part of what makes Sea of Thieves so visually arresting is the little unique details just begging to be discovered, but nothing is ever made of any of it. There are countless numbers of unique flowers, structures and rock paintings dotting each island that offer the impression of something greater. On their own, they are merely something to be seen and forgotten about, but so much of it is just begging to be tied to some greater context. If I see a rock painting that refers to some grand beast of the sea, I want to know that beast is out there, just waiting for some poor sod to be the one that awakens it. I want that mythical side of pirate-lore–ghost ships and whirlpools and ancient giant sea creatures–to be fully embraced and put on display, and Sea of Thieves barely seems to acknowledge any of it, all for the sake of the sandbox.

Sadly, there’s more than just missed story opportunities to be disappointed about. While the sailing and ship combat is largely superb, on land things take a big turn for the worse. The gunplay is painfully slow but forgivable, given the old-timey nature of those weapons. But the sword combat is nothing short of awful. Swords don’t so much clatter the enemy as feeling like they’re slicing at thin air. For a system that only offers two attacks–light and heavy–it’s surprisingly cumbersome, looking and feeling about as responsive as a three-year-old trying to throw a shot put.

The game’s three main factions–the Gold Hoarders, Order of Souls and the Merchant Alliance–are equally as disappointing to deal with. Firstly, there is almost no discernable difference between the three outside of their vaguely different colour schemes, which feels like a frankly astonishing oversight. Each of their missions feel the same; go here, kill or collect something, bring it back to sell. Rinse. Repeat. Go. Kill. Sell. Over and over again. Not only that, but the rewards for completing voyages range from vastly underwhelming to borderline laughable. Depending on what you bring back you’ll get a small sum of gold to buy wildly overpriced item skins and other cosmetics with, along with experience to raise your reputation level with that faction. And while the promise of greater loot makes it easier to grind out those early game levels, that also leads nowhere. After hours and hours of looting and pillaging, and despite being above level 15 on all three factions, base rewards remain as piddling as they did the first time I did it.

When it all comes together, Sea of Thieves can feel beautifully cohesive. The sailing offers a sense of freedom that would rival any other game around. It’s an audio/visual masterpiece, with a look that’s as extraordinary and striking as the best around. But it’s all just sitting there on the surface. Many others have talked about the game’s problems as a lack of content, and I don’t think that’s the issue at all. The problem is that what they do have in there means very little, if anything at all. It remains to be seen how Sea of Thieves will grow in the future–being a live game it almost certainly will change at some point–but it’s hard not to come away feeling disappointed. Because Sea of Thieves is really a likeable, charming game that I want to see become better. It’s just not there right now.