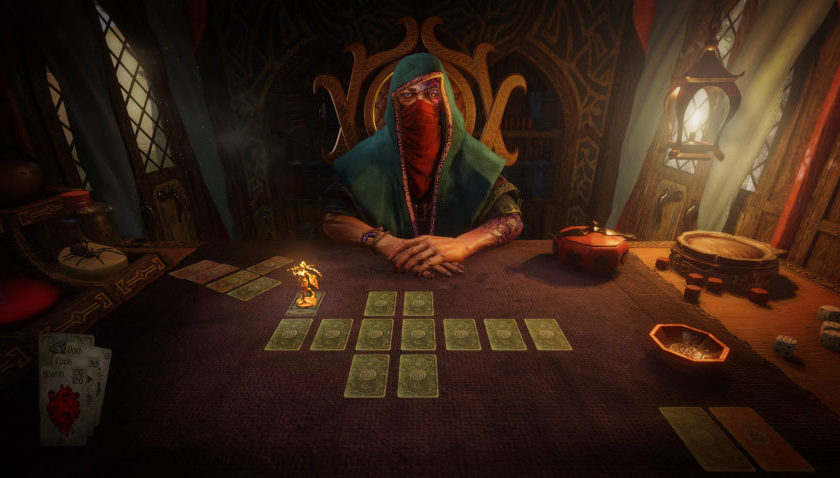 Hand of Fate 2 – A Choose Your Own Death Adventure

We asked Matt Hewson, Player2 site owner and star of the hit TV show Cards, Bards & Sharts to be a participant in this session. Any failings should be attributed to him…

Welcome, handsome traveller. We have the game ready for you. What would you like to know about first?

Your eyes adjust to the small yet beautiful Switch screen instantly. Surprisingly, the text is easy to read, not too small at all, not like the smeared mess of so many ports. You smile in surprise and decide to offer some coin to the developers.

Laughing like a crazy person, you toss all your money into the Magical Developer Well of Switch Ports. As you listen, you hear the happy sighing of many starving developers as they gratefully accept your offering. Unfortunately, this leaves you with nothing and you spend a cold night shivering in the forest. You wake to some negative news.

The Switch game you’ve been playing (where have you been storing that?) has developed a slight delay with its inputs, so that when you’re hammering the attack button during the action phase of the game, your character often fails to react to another input to parry or evade, which gives the Arkham-lite combat encounters a frustrating level of awkwardness, especially against a gazzillion (or so it seems) enemies, which the game likes to throw at you.

You emerge from this negative fugue and survey your options:

You forego your protesting stomach (you didn’t have any food anyway because the game takes great glee in automatically docking your health just for jumping onto a new card and then making food units super expensive) and wander towards the nearest village. On your way, you see a fellow game reviewer battling with a gamer-gator. Will you:

You pull out your little rusty sword (hey, it still gets the job done) and rush to the journalist’s aid. Just then, several more gamer-gators emerge from the swamp. They have rheumy eyes and their shirts carry the stains of many past meals. You must roll the electronic dice, which you have absolutely no control over but have to trust are random, but we all know they probably aren’t.

Matt: Gosh, this is getting a bit deep. Look, I’ve always enjoyed a bit of a lucky blow, so option three.

You pass your hot, unwashed breath across the bone dice and roll them. The result is a lucky 14, which means you get to be a sick-arse ninja with that puny blade! You carve the gamer-gators up like the butter sculptures they are. After a few eviscerations, the rest squeal in fear and retreat to their swampy abode. The game journalist is grateful for your help. He offers you a sword as reward:

Matt: Look, I know I should take the fame, but I might go the free sword and then come back and replay this scenario later to complete it properly.

The sword is heaps better than your old one, equip it?

You equip the sword, which has a wicked new move you can pull off once you’ve hit enemies six times. Don’t forget to use it. Anyway, you’re going a bit too well at the moment, so I’m going to dock you ten health for . . .  arrogance or something.

Matt: Hey, that’s not fair! I couldn’t tell I was going to get penalised.

That’s the beauty of a card game. I can draw this shit out of my digital hat and there’s nothing you can do. Now, if you keep arguing, I’ll whack some other made-up condition on you.

Would you like to forego your new sword for the next three encounters in exchange for some food?

Fine. As you’ll see, each part of this adventure is effective without being amazing, but when combined together things keep moving at an enjoyable and somewhat addictive pace. There’s always the next card to draw, the next random event to play out your adventure and this makes replaying scenarios just as interesting as unlocking all of the campaign missions. There are some frustrations related to the random nature of computer-controlled luck, but every downward slide is usually followed by a spell of good luck and favourable encounters.

You make it to the end of the review. Congratulations, adventurer. Don’t forget to claim your new encounter cards and free fairy floss (the latter is a lie, but you have to admit that as you get older the thought of pigging out on fairy floss guilt-free becomes almost overwhelming . . . No? Just this dungeon master then).

Good luck in your next roll of the dice. . .