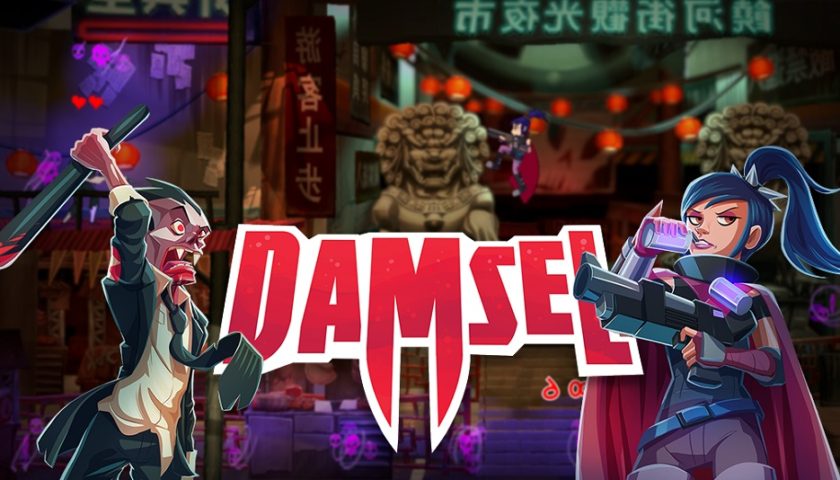 I scoffed after playing my first few levels of Damsel. The marketing had promised me a fast-paced challenging action platformer and while they were right about most of that, ‘challenging’ wasn’t exactly something I would have used to describe these introductory levels.

Clearly, I was just a video game master. So skilled and fancy that this beautiful little arcade vampire shooting simulator just couldn’t keep up.

Slowly, it started proving me very wrong. Damsel starts you out perhaps a little too easily, the side-scrolling action is fast but unthreatening, at least to begin with. Each level can hold a different main objective, whether you’re saving the hostages, cracking the safes, or killing all the vampires and it wants you to be clear about how to achieve these. At first, I mistook this gentle walk in for a lack of teeth but soon Damsel was proving true to its vampiric theme.

Speaking of, the bite-size levels work well giving you an easy drop in and out style of play. You can load up and play a few levels and put it back down within a few minutes, saving you from too much frustration if a level is getting the better of you. Not only is this good for those short on time but this paired with the Twitch integration could make it a good in-between choice for those looking to stream.

The different objectives help to offer some variety to the levels, but it seems a bit of a facade and is rather unnecessary. It can be fun setting little personal challenges to go with them like choosing to go through trying to avoid killing the vampires in favour of just hacking all the servers. Unfortunately, some of the options can feel quite similar activating a small puzzle where you have to hit a button on the yellow marker in differing ways, so the added differences aren’t as varied as they originally seem. You will also still just get more points for doing everything a level has to offer so for completionists this will likely be the main way of playing. Thankfully the level design is all quite different with several enemy types so while what you’re doing may become repetitive no two levels felt exactly the same.

The art is incredibly polished and detailed with some of the levels having me genuinely stunned by their backgrounds – until of course I was punished for standing still that long. This did mean that sometimes I would misconstrue a hostage for a vampire and take them out frustratingly ending my run on that level. I was also the kind of person to fire rapidly in the ‘don’t shoot’ sections of time crisis back in the day so this could be more my problem than anything else.

Another misconception I had while playing at first, was the controls felt floaty as though there wasn’t enough weight or precision to my movements. After some acclimatisation I found myself executing moves that proved this couldn’t be the case. It’s one of those games where you can sloppily fumble your way through most early levels doing the bare minimum, or purposefully repeat sequences until you can perfectly zip through completing every objective with zero damage. There are even options in the menu to stop you from dying if you want a bit more of a puzzle focussed and relaxing play, or if you want it harder it has you covered there too. All ways of playing are open to you which offers a level of replayability and personal reward.

This is furthered by daily challenges and leaderboards which will come on release day. While Damsel may not take you more than a few hours to beat, depending on your skill and play style there’s a surprising amount more meat than initially appears on these bones.

In between levels you’re treated to comic book style snippets of story to explain why you’re mowing down vampires as though you really need a reason.  It was a little confusing to read that my next mission was supposedly stealth and have it play out exactly like all others. They’re pretty and seemingly purposefully cliche with tough guy attitudes and sassy back and forth but I didn’t find they added much to the experience.

Damsel gives back what you put in which is fantastic for those wanting to really master a new arcade platformer. It lets you play however you like while staying true to its roots of having a serious challenge for those looking for it. There’s a sense of doing the same thing over and over again and it can be fairly frustrating at times but this is all nicely combatted by having short and varying levels so there’s no need to play the entire thing in one run. Damsel is well worth a look and feels like a game that will only grow and get better when it’s 3rd chapter is added to complete the story.