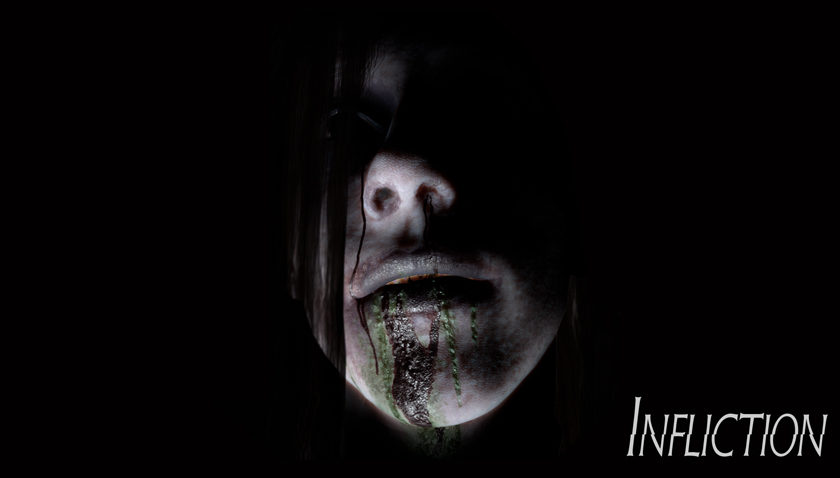 Caustic Reality is a studio based in Sydney, Australia and founded in 2016 by sole member Clinton McCleary. Clinton has spent the past five years honing his craft in order to bring to life his twisted vision, Infliction – a game many Player 2 writers are too terrified to even Preview (A bunch of chickens, the lot of ’em – ED). Shaun Nicholls interviewed Clinton to find out more about the development of Infliction and what the future holds for Caustic Reality.

Shaun Nicholls: What was your reaction to being included in the PAXAUS Indie Showcase this year?

Clinton McCleary: Shocked, surprised, excited, honoured. When I got that call it meant so much to me. At that time, thousands had tried the demo I released on Steam but only a small handful of playtesters had experienced the full game. Given the judging panel played the full game and it got selected, I assume they liked it. It was validation for me.

SN: Will we see a new demo for PAXAUS? How does it feel to gain the level of exposure that the Indie Showcase will provide Infliction?

CM: I hope to create a demo specifically for PAX Australia. It all comes down to timing, though. The game is being released right before PAX so I’m very time poor right now, and October is shaping up to be the craziest month of my life. I really want to have something new for the show floor, so knowing me I’ll find a way to get something made. Gaining exposure is the name of the game for us indies. Being selected as part of the showcase is an invaluable opportunity to celebrate our launch and connect with new players.

SN: Do you think indie developers face a certain amount of pressure during those final stages of production, especially given that you have been wholly responsible for the development of the game?

CM: Yes, I do. If you’re a creative working on any project, be it game, movie, or literature, I think it’s normal to feel pressure when preparing something for commercial release. I’ve got only weeks left to implement playtester feedback and polish something I’ve been building for 3 years now. What I’m about to release will be judged. Some people are hyped for the release too. All these factors add pressure on top of finalising the game and launching it.

SN: You have said that you were first drawn to game development after playing Gone Home and that Infliction is the end result of that ambition. Have there been dramatic changes to the game or has the (almost) final product stayed true to your initial idea?

CM: The Gone Home aspects have always remained intact. Environmental storytelling is where I live, and I love it, so much so that I learned all aspects of game development over 5 years to fulfil that creative desire. I’d say the final game is very close to my initial vision except for one aspect – the scope of the game. The game I have now is several times larger than what I had originally envisioned. When I scoped the project for one person, I scoped small. There came a point that I wanted to add more, and so I did. One of the advantages of being a one-person team is the ability to pivot quickly. Another change from the original design was introducing difficulty modes. Through playtesting learned that some folks found the game too difficult. Now the “normal” mode will lead the player, offer clues and hints if they’re really stuck. The “hardcore” mode will not have any of these helping features.

SN: Were there any aspects of the pre-production designs that you were unable to bring to life once in development?

CM: Everything made it in, except for two things. I had filmed a public access cooking T.V. show for the game, five very short episodes. While these will make it in to the game, I had intended to shoot another T.V. show so the player would have the ability to switch channels. The T.V. shows represent what’s going on in the players life at that point in time, in the game. While the cooking show represents the “bad” side of the player psyche, this other show would mirror with the “good” side. The 2 shows would be synced so when you change channels between the two you’re hearing two sides of the same story. I ultimately didn’t have time to shoot the second show, so it was axed fairly early on. I also wanted to create an extra character. This was cut towards the end of production due to time restrictions. This character would have been an A.I. driven enemy for one section of the game.

SN: You have said in one of your blog posts about the possibility of rebuilding Infliction to be able to run in VR and be available to play. If Infliction is successful, would you also consider going back to the content you had to cut out and putting it back in for the new version of the game?

CM: For the content that was cut, yes. If a VR version was developed, it would likely be a different game. I may find myself cutting other things that perhaps don’t fit with the new design. So much of Infliction was not designed with VR in mind. Sure, I could just port it over but that’s not what I’m about. I’d rather curate a comfortable experience designed specifically with the platform in mind.

SN: What was the greatest design challenge you had to overcome while making Infliction?

CM: The world is fully interactable. Almost everything has some kind of interaction that is possible. You can turn on and listen to the radio, use the toaster, examine everything. Because of this design philosophy, I wanted the ability to turn lights on and off dynamically. This meant a huge performance hit, as usually lighting is baked in to textures, but now I’m dynamically casting light at run time instead. I have several systems and tweaks in place to enhance performance and ensure not too many lights go on at once, but I wanted a narrative reason for the player to not want all the lights turned on all the time. I can’t specify the details but turning a gameplay feature into a performance enhancement based on limitations feels like an intuitive and inclusive design.

SN: Without going into spoilers, what is the part that you personally love most about Infliction?

CM: The things I love most about the game change every week. This week it’s the final cutscene at the end of the game. Overall though, It’s the way Infliction transitions the player between locations. In the demo, you enter a mirror and are transported to a mirror version of the world. There are some other moments where this happens and to me, it just feels right, and it’s a real WTF discovery moment for the player.

SN: What was the funniest issue/bug you encountered during the development?

CM: The AI ghost in the game that stalks you has a fast acceleration on her movement. Usually, if you spot her, you have only seconds to react. In the foyer of the house, there is a staircase and a landing. There was a bug in a very early build where her acceleration was so high, if you were downstairs in the foyer, she’d spot you from upstairs and she’d kind of launch of the top step and fly past you, totally overshoot her target, get confused and then run at light speed to the other end of the house and stand in a corner. Made me laugh every time. It was almost like she was sulking about her failed attempt to kill you so she’d have to go, hide in the corner of the house, and ask to be left alone.

CM: Delays are unfortunate but if you can afford the delay, it’s worth it. It’s a little bit of both, planning and fortuitous how everything has lined up. When I was planning the release date it was aimed at Halloween. I had always intended on showing Infliction at PAX. The plan was to release some time in October and promote at PAX during Halloween weekend. I didn’t know I had won a spot in the showcase when I was planning the release so that part has been such a boost to both my launch plan and my morale heading in to the last phase of development. I’m just so grateful It’s all come together so nicely.

SN: Is there anything that you yourself would like to check out at PAX if you get some time away from the Infliction booth?

CM: Everything! I’ve never been to a convention before. I’m all in on my first time! Is there any other way? Because I work in total isolation in Sydney, I’m excited to meet other indie developers and check out what they’ve been up to. I’m also excited to see what the platform holders have going on at their booths.

SN: What comes next, post the launch of Infliction, for Caustic Reality?

CM: Hopefully I’ll be spending the next 12 months porting Infliction to the other platforms. I have several projects in mind to pick up and run with, also. I think I’ll pick one of the smaller projects and do something with a quicker turnaround before jumping in to another years-long project. I’m really excited for what the future holds.