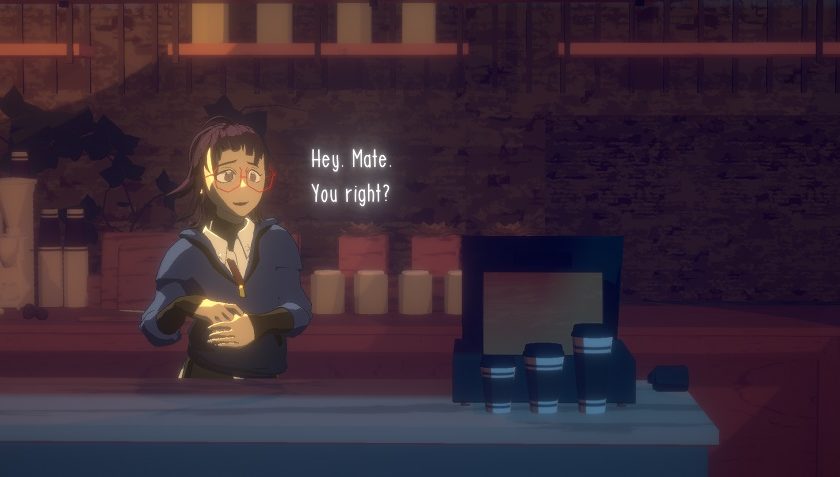 From the PAX AUS 18 Showroom Floor – Necrobarista, Tracy Laser & Where the Snow Settles

Like a lot of anime fans I love a good Visual Novel so seeing a new take on the genre with a uniquely Aussie perspective made Necrobarista something I couldn’t walk past. Billed by the developers as a “cinematic visual novel” the demo definitively mixed things up from the traditional format. Most games in this genre have a very consistent look, detailed static backgrounds with overlayed characters and a text box across the bottom of the screen. While Necrobarista has all the same elements, backgrounds, characters, and text, by taking visual inspiration from cinema the end result is a much more dynamic and visually interesting experience. Interesting camera angles, cell shaded character designed, and dark colour palette gives Necrobarista a slick contemporary vibe similar to a title from the Persona series. Combine all that with a pulsating electronica soundtrack, a system of selecting keywords rather than responses from a dialogue tree, and some point and click adventure elements and you have the recipe for something really unique. It is difficult to judge a story heavy game from a short demo but the writing we did get to see seemed solid with a good mix of humour and mystery, they even managed to sneak in the phrase “calm your farm” so I have high hopes that the story will match the polish and promise shown on the surface. With a release coming early 2019 across PC and Consoles we can’t wait to explore The Terminal and serve flat whites to the dearly departed souls of Melbourne with our new glasses wearing Waifu Maddy.

With games in VR, movement is usually a trade-off of realism vs space, most titles get around this by either mapping movement to a thumbstick or adding a teleport mechanic trading immersion for the ability to play in smaller areas. Tracy Laser was showing off a different approach to solve this problem which the developers are calling “redirected walking”. By using a mix of winding corridors, elevators, and moving platforms the tech demo took us on a walking tour all with the confines of the 3×3 meter booth on the PAX show floor. Despite being just a small taste of the mechanics I found this to be a really immersive experience and I found myself tentatively feeling my way when stepping over gaps and fighting the urge to reach out and try to steady myself on walls and hand railings which exist only in the world of the game. There was a real sense of movement across the level which is a very impressive feat in an area the size of a lounge room, however people susceptible to motion sickness or afraid of heights may struggle with some of the high moving platforms which occasionally gave me a touch of vertigo. The tech demo on display was limited to just the movement but it left me with a huge smile on my face. Trailers show the complete game will involve platforming, shooting, exploration and if these are executed with the same skill as the movement you can expect to hear the name Tracy Laser again closer to the release.

Where the Snow Settles

I stumbled on Where the Snow Settles at the end of a very, very long weekend, I was hoping to rest my feet while playing but walked away feeling like I had rested more than just my body. The demo opens with a short establishing sequence, introducing a bleak world of failing crops and fears of hunger with winter on the way; then we take control of Aurelia as the heads off into the snow to find her sister. Gameplay is mostly exploration, discovering points of interest that trigger events, or just give insight and information about the story, world, and characters. The developers have stated that there will be no combat in Where the Snow Settles so it will be a completely narrative-driven experience.  Most of the storytelling takes the form of Aurelia’s internal dialogue and each line is carefully crafted to provide insight into Aurelia, her world, and the story while avoiding outright exposition. There was no spoken dialogue in the demo, just soft atmospheric music and the sound of boots crunching on snowmaking an almost meditative soundscape to accompany the game. The pace of the game is much slower than I am used to, almost like older style adventure games, I wonder if this might become a source of frustration as the game moves forward but in the demo, it felt as though it added to the atmosphere and feel of the game. Overall Where the Snow Settles gave me a sense that the developers have taken their time to carefully consider every aspect of the game and how it combines to create an overall experience, greater than the sum of its parts.