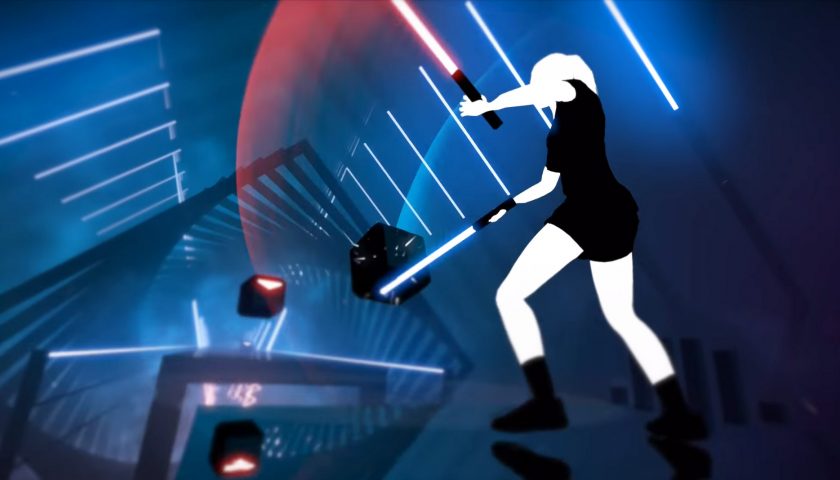 VR vs Fitness and Fat – One Week Down

Hope and Matt are one week into their VR Fitness challenge so it is time for a weigh in and to check how they are going. The results are pretty encouraging that’s for sure.

It’s been a week already and let me tell you I have been such a piece of shit. I have kept doing a minimum of 30 minutes of VR every day. However, I have eaten so much food that I was certain I wouldn’t have lost any weight. You just can’t outrun a bad diet, and my diet has been abhorrent. Several times I went to bed with tightly stretched tummy skin, thankful that it was merely food causing it to be so bulbous.

That being said, to my surprise I’m down 1.7kgs, and in no way do I deserve to be.

You see, this might have been a bad week. I saw two movies which meant I had to eat two large popcorns plus other chocolates to go with them. It was also my partner’s birthday and mother’s day, both which caused celebratory foodenings. Add to that one day where I got sad and ate a large packet of Doritos and a block of chocolate and you’re starting to see how badly my diet has been this past week.

To be fair, on the days where I didn’t do… well…. All of that, I ate very well. I’m not saying I deserved a million cheat meals but maybe I mitigated some of the damage.

We play #BeatSaber a little different in this house. This was from day 3 of the #VRvsFat challenge for Hope – it's her current favourite song from the new pack called Overkill. She would like you all to know that her arms were already very sore from #BoxVr the day before and no she can't be less of a dork. She then messed up and got sad causing her to eat a whole packet of Doritos and some chocolate … Some wins and some losses …

On the other hand, my measurements are super weird. I chalk this up to not really being very good at taking measurements and human error. Things like potentially a different bra can also play a pretty big role regarding the chest measurements. I’m not going to look too hard at these unless there’s a very significant difference due to these reasons. If I see a change of more than ten per cent, then I think I’ll start paying attention.

How I’m feeling is much trickier to quantify. I haven’t had the best time for mental health but I don’t think that has anything to do with this challenge. I know exercising helps some people a lot. I generally feel better immediately afterwards but it hasn’t helped me feel any better day-to-day in a more long term kind of way. Perhaps that’s partially because I’ve been dumping a lot of crap into my body, though. Who can say? Doctors? Nah.

Despite this, I am pumped to do more and try a bit harder this week. Eat less like a freaking monster and probably put in even more VR.

Matt and I have agreed that in terms of sheer fitness regime, Box VR is the one that kicks our butts the hardest. I’m going to look at trying to do a little bit of that every day. This means that even on days where I’m playing Beat Saber I’ll put in at least 10 or so minutes of Box VR to up the ante.

I do honestly believe that VR saved me from myself in this week of extreme indulgence. Now, let’s see what it can do when I’m not a total shit head.

Looks like @hope_corrigan_pics is desperately trying to work off all the bad food she ate this weekend before the #VRvsFat weigh in. Spoiler alert: it's pretty much impossible to work off a diet this bad. #BoxVR does a pretty good job of kicking her butt so if anything can do it this can.

Wow, what a week. I must say that when I started this, I didn’t expect it to go so well or for the games, BoxVR especially, to be so effective at getting the heart rate pumping. Throughout the week I kept the schedule of 30 mins a day, alternating between BoxVR on one night then Beat Saber or Creed on the other. This worked well, allowing my arms some recovery time after the initial hurt put on them by BoxVR.

But as things progressed, something happened. My confidence grew and so did my abilities within the games, so last night I changed my schedule. From now on I am doing BoxVR every night and adding 10-15 mins of Creed or Beat Saber as well. I have also changed from doing short 7-10 minute workouts in BoxVR to doing 14-16 minute ones to keep pushing myself, especially now my recovery is much better than when I started. By the end of the week, I hope to be able to do a full 30-minute workout instead of a few smaller ones with breaks in between.

As for food, for most of the week, I have been pretty well behaved. I have been using a food tracker on my phone to keep track of what I am eating and to keep my calories under my daily limit. This is no doubt helping with both my weight loss and my motivation. The simple act of entering this data forces responsibility for my actions and highlights where I could be improving. I undid a little of this with a few drinks and a feed at the pub on the weekend but to be honest I am not upset about that. This is the real world and I am not going to stop socialising and enjoying myself. It is about finding balance and that is the thing I have struggled with in the past.

Check out Matt cracking away in his VRvsFat challenge in BoxVR

The only thing I am worried about this week is I seem to be getting a bit of a cold. I won’t let it stop me, but it may cause problems with my recovery time and force me to take some lower intensity options, but we will see. I certainly don’t want it to slow me down but at the same time, I don’t want to cause myself further problems by pushing too hard.

I will say however that I am starting to believe. I was sceptical at the start of this that VR would make any difference at all, but now I am coming around. I feel better for having done this and I also feel like I am sleeping better. I am very keen to see how I go next week because usually when starting a change like this I lose weight quickly in the first week before slowing down, so I feel like next week’s results will be a more accurate indication. That said I am super happy with how it is going and motivated to do more. Bring it on!

Tonight in #VRvsFat it is a very unco @Hewso81 and #creedrisetoglory A proper workout this one, even if I carries the very real danger of punching the tv. Back to #BoxVR tomorrow

So that is it for week one. Make sure you follow Hope and Matt on our Instagram account and keep an eye out for some impromptu Twitch streams while they bust themselves in the name of self-improvement.