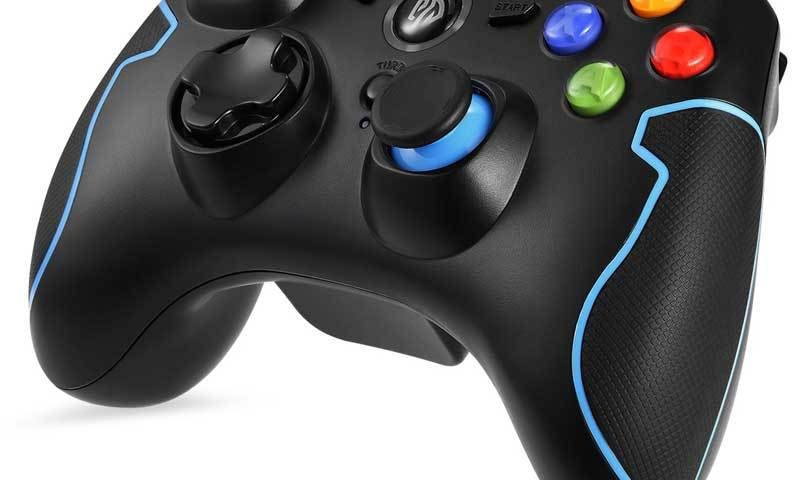 I’ve always been a big fan of console gaming- there’s something really satisfying and comforting to me about being able to sit on the couch, hold a controller in my hands and bash monsters. However, with a lot of my favourite games on PC, I don’t often get to game on the couch all wrapped up in blankets.

Recently I’ve been playing a lot of Dauntless, so when I was asked to review the ESM-9013 Wireless Gaming Controller, I thought I was in a pretty good spot to do so. So I bundled myself up with my heater and my blankies and my cup of tea, and for the last month, I’ve been bashing monsters with a controller- and loving it.

The ESM-9013 is on the cheaper end of the spectrum, priced roughly at $25USD. The controller is wireless and runs on AA batteries which (depending on the brand of battery) claim to provide up to 20 hours of gaming. I easily sunk around 15 hours into Dauntless using this controller and my batteries didn’t die once, nor did I experience any sort of “low battery” symptoms that sometimes happens when a device is losing power.

The controller boasts a 10-meter distance radius, but if I sat 10m away from my PC I wouldn’t be able to see dick. The maximum distance I was able to test it was about 4m, but saw no difference in input and experienced no lag.

Built like the Xbox 360 controller, the gamepad features all the usual buttons, as well as whatever the Xbox equivalent of the Start and Select buttons are (clearly not a Microsoft girl, sue me) and each button delivers good feedback when pressed. The vibration courtesy of its asymmetric motor has a good feel to it. It also comes in two different colour schemes; one with blue designs and one with red, and for its cheap price point you can grab one of each to suit your mood if that’s your thing.

My one gripe with this controller is that it feels cheap. But, 25 bucks is cheap. And for the price, you’re still getting a fantastic controller that does everything you want it to for about 20 hours from 10 metres away. It’s not going to compete with something like the Xbox Elite controller, but at its price point, it doesn’t have to.

It also might have been nice to include a rechargeability aspect to this controller, but it’s not necessary. It’s really not a big deal to buy a pack of batteries every so often and chuck two of them in every 20 or so odd hours. As I said, I used the crap out of this thing for a month and I didn’t have to replace my batteries once- so the longevity on this is a great feature even without a recharge feature.

Easy SMX is all about delivering great quality products for budget pricing, and after using this controller for a month, I can say they definitely succeed at that.