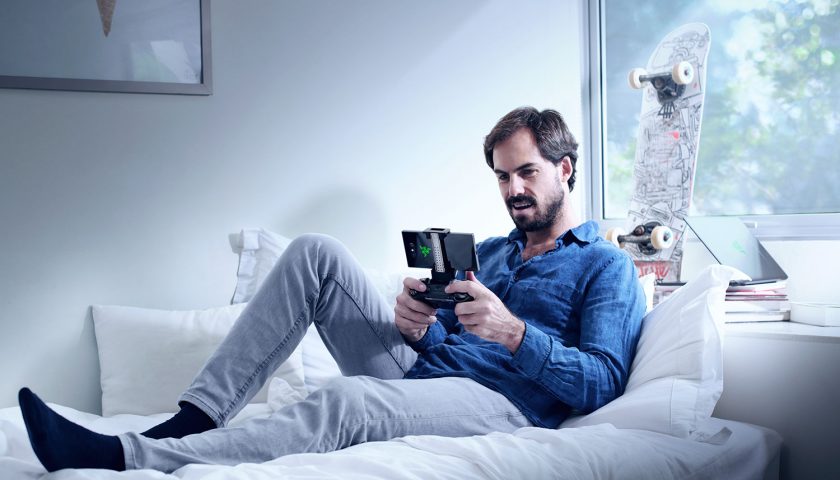 I don’t often really think of phones as a gaming device but the Razer Phone 2 paired with the Raiju mobile controller might change my mind.

For my use, something about most mobile phones has always felt lacking when it comes to gaming. They’re fine for things like Pokemon Go but for more serious games I need buttons, I need screen space, I need an easy way to hold the damn thing.

When I was asked if I wanted to review the Razer Phone 2 and Raiju mobile controller I was sceptical. I came at the project with the same eagerness of someone trying to find the hitch in someone’s argument. The person in the crowd who yells ‘it’s just mirrors’ at a magic show. You might call them, the arsehole.

To be fair I was willing to be proven wrong – I just didn’t expect it. I always hope for things to be good. This combination was better than I expected at being a gaming device but in doing so, did sacrifice some parts of being a phone.

When you first look at the Razer Phone 2 it’s a pretty different looking device compared to other flagships. It forgoes the current fashionable edgeless design to give you two large speakers on the top and bottom of the phone. These are front-facing and are your first hint that this is a device designed for entertainment.

Impressively, despite having such large speakers they’ve still managed to make this phone water-resistant. This usually means having a membrane over them and compromises the sound quality. I honestly didn’t notice that at all and thought these sounded like some of the best speakers I’ve heard on a phone in recent years. The downside is the little holes were always getting bits of stuff in them – this was a review unit and it already had little flecks from the people who’d used it before me, buried in the holes.

The other immediately noticeable feature is the shape. The Razer Phone 2 is a very sharply angled rectangular device. Again, this allows the screen and speakers to be more straight forward. I did find this made it a bit less comfortable in the hand than some other devices but that could be fixed with a case.

When we come to the other exterior features we can see a sim card and SD card holder, a fingerprint reader and home button, USB C charging port, and volume buttons. These are all good and necessary features but it does mean we don’t get a headphone jack on this device. Personally, that’s a real problem. I almost always use wired headphones and not being able to renders a lot of my peripherals useless. Not having a headphone jack is nothing new in a phone but it’s always been something that I feel has lacked courage.

Under the hood is where this phone really shines. The Razer Phone 2 sports a 120Hz screen which is very uncommon for mobile devices. It’s not an OLED panel so it doesn’t have those super rich blacks but it is easily the smoothest display I have ever seen. Scrolling through apps is noticeably nicer than it is on any other device I’ve used. Transitions between apps or in games are simply smoother. For hardcore mobile gamers, I do believe this could be as effective as the difference between a regular and gaming monitor. I’ve honestly not seen anything like it on a phone and it’s what I’ll miss the most.

The screen paired with the speakers is what sold me on the idea of it being a gaming device. If the primary thing you do on your phone is consuming games or even watching some videos with phone audio then I absolutely would recommend the Razer Phone 2.

It holds up pretty well as a regular phone too – but not quite up to the standard of other flagships in some ways.

Things like the camera aren’t as good as other high-end phones. The photos just aren’t as clear and it tended to be difficult to focus and always seemed desperate to overexpose every image. It also seemed to have some troubles with my wifi but it’s hard to know if that was the phone or something else at play.

The other downside is it’s not a common phone and this makes things like updates and cases immediately a little more difficult. Every now and then I’d notice small things, like not being able to throw a curveball in Pokemon Go because it just didn’t seem optimised for the device. It absolutely looked smooth and pretty but occasionally usability became a thing.

Phone calls were always fine and clear – though I’m not too sure if people really do that with phones anymore. Reception seemed about the same as what I experience on my other phone too, so for the absolute basics of phone use, it’s more than adequate.

One thing I did pick up on was using the keyboard. Something about the layout of this device meant that often while texting I’d accidentally hit the back, home, or multiwindow buttons. I tried a few different keyboards and had the same thing every time. It is incredibly frustrating but I think it’s likely a training issue. Fingers will get used to keyboards eventually but it’s something to be aware of.

Again though, these little downsides would absolutely be worth it to me if my primary use for a phone was a gaming device. The phone doesn’t lie about why it’s made at all so it seems fair that it maybe doesn’t do as well in other ways, especially for the price.

Pairing it with the Raiju mobile controller really drove home what this device is for. I understand that you can use this controller with other phones but having the front-facing speakers and the smooth screen complete with tangible buttons made this feel like a legitimate gaming device.

The Raiju Mobile controller is a lot like an Xbox controller with offset thumbsticks and a full complement of face buttons and triggers. This is my preferred layout so for me it’s extremely comfortable. It works either cabled or Bluetooth and as corny as it sounds absolutely turns your phone into what feels like a portable game console.

It doesn’t work with all games yet though. I downloaded some of the internet’s favourite mobile games that work with controllers and many didn’t work with the Raiju at all – despite some tweaking. Razer does provide a list of games on the website which are currently supported and all of them worked flawlessly. I can only assume this list will expand as time goes on. For those asking, it absolutely works with Fortnite mobile and felt really good. I still lost every match but that is par for the course.

Another neat trick with this controller is using Android Steam Link. I was able to stream my Steam games seamlessly to my phone while on the same network. At first, I had some issues but after I bumped down the visual settings to prioritise latency and it worked perfectly – I also didn’t notice a decrease in quality of images.

This turns my phone into a portable device that can play any of my Steam games while I sit and chill on the couch and that was immeasurably cool to me. I tried some indie games like Damsel, an action platformer which worked beautifully in handheld mode. I also tried FPS like Portal 2 and as long as controller support is enabled everything works. All the heavy lifting is done by the PC so the phone isn’t even that important in this case but the 120Hz screen and front-facing speakers of the Razer Phone 2 really do make it a nicer experience.

Regardless of your phone, the Raiju controller is a cool piece of kit if you’re into gaming. The downside is always just going to be the games.

Even though tonnes of games work, like I previously stated, a controller doesn’t always make mobile games any better. There aren’t enough games that really benefit from a controller aside from personal preference. I think this will change as devices like the Raiju become more commonplace and maybe more console-style games release for phones.

Because of this, the Raiju is probably only good for people who have a game in mind they want to use it for – or if you want to play your Steam games on your phone.

In that way, I feel like the Razer Phone 2 and the Raiju controller both have the same issue, and honestly, it’s not them. They both just feel a little ahead of their time. After my time with both devices, I do believe this is the best mobile phone gaming set up on offer. However, I don’t think most people are feeling the need to buy a phone and controller that are dedicated to gaming. There just aren’t enough games of this style for phones to warrant it. As more console-style games release on phones, this may change but for now, this is very cool but also a little niche.

If you’re a dedicated phone gamer and you want things to be smooth, and loud, and beautiful and you don’t mind sacrificing small aspects of similarly priced phones then the Razer Phone 2 is the best choice on the market as far as I’m concerned. If you are looking for one of the best mobile phone controllers out there to turn your phone into a gaming device (and you know what you want to play on it) then so is the Raiju controller.

If not, then you’re probably not alone. Playing with this set up absolutely made me believe that there is a future in phones for gaming beyond the touch games we see now. I can see people in the future carrying a device combination like this in place of a Switch or something similar for their on-the-go entertainment. I just don’t think there are the games to warrant it, yet.