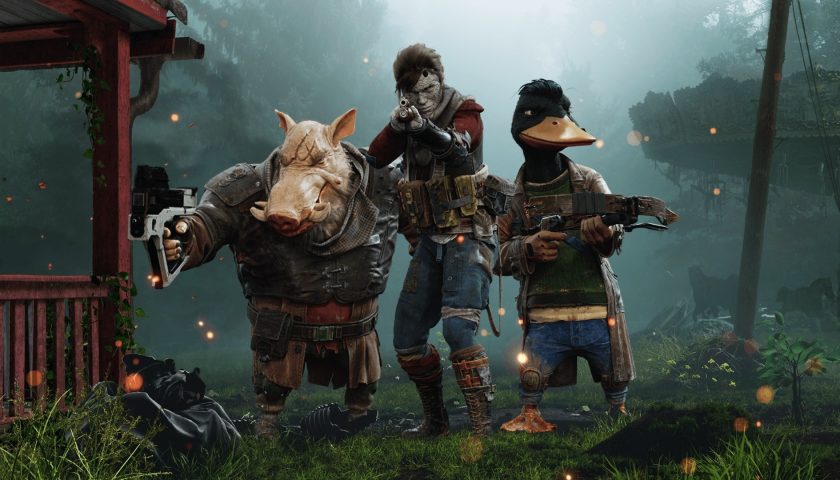 Mutant Year Zero: Road to Eden – Taking a Pig and a Duck on the Road

A duck and a pig walk into a bar….feeling a sense of deja-vu coming here? “Didn’t Hewso already review Mutant Year Zero” you may ask. Well yes, yes he did and you can read that review right here. I’m here to talk about the Nintendo Switch version, which has been bundled with the Seeds of Evil expansion to give you all the hybrid Action-RPG goodness you crave whether you are at home or on the go.

The good news is that the game runs pretty well on the Switch. The top-down camera means that the system is not forced to struggle by trying to show you too much information at one time, allowing the game to run relatively smooth while in handheld mode. With the reduction in power as a result of playing in handheld mode, the graphics do take a bit of a hit, with edges not as crisp and a slight pixelation to the screen. When docked the game does look better and there is a complete elimination of the few bits of stuttering that do occur while playing on the go.

The controls are well suited to the Switch. Moving the characters around outside of combat is quite easy, a part of the game that I prefer over similar games like X-Com which restrict your movement to turns from the get-go.  Combat is easy enough to get a handle on, you just use the directional buttons to choose what action you want to make and then select it by pressing A. However be warned, there isn’t much in the way of instruction for the use of mutations, so some of them you have to experiment with to find the best ways to utilise them to make the most out of your situation. As Hewso said in his review, stealth is the key to succeeding in this game. Make those silent weapons your friends and figure out how to utilise your party so that you can make sure to kill any enemies you come across without them alerting their friends.

The bonus for people coming into the Switch version of Mutant Year Zero is that the game comes bundled up with the Seed of Evil expansion. While you can jump into it at any time it is advised to complete the main story first as there are pretty significant spoilers and you will be ludicrously ill-equipped to survive a fight against even a singular opponent. Once you get there you will get to continue the story of Dux, Bromin and the other Stalkers you gather in your journey as well as a brand new Stalker, Big Khan. The game changes up the enemies by introducing a new faction, for lack of a better word, with different abilities to the ones that have become easy fodder by the end of the game.

In comparing my thoughts to Hewso’s previous review, I did not get the feeling that my characters were under levelled in combat. In the early part of the game I had to be cautious with the way I approached enemies, but as the levels progressed and I upgraded my weapons I found that I was no longer concerned about what if things went pear-shaped. This may be because I was playing on the normal difficulty and thus my Stalkers were healed once combat ended and their skills reset ready for use, but even the bigger fights where I could not rely on this help became something I could easily overcome. For example, in one fight midway through the main campaign, I was engaged in a fight with a giant mech, a tank enemy and a Molotov thrower. I decided to use the Joker ability to draw attention to Bromin, intending to use the opportunity to down my opponents. That was when I discovered that I should have used it a bit earlier in the game so I knew what to expect. Not only did I draw the attention of the enemies I was currently engaged with, but I also alerted the other seven that were elsewhere on the map. Surprisingly I held out, mixing strategic attacks with a good dose of luck and a few medpacks to come out of the battle with all three of my Stalkers still breathing.

Unfortunately, the game does not run perfectly. There is a semi-consistent bug that causes the game to randomly crash, so it is of great benefit to save often, especially if you find yourself in the middle of a battle that has you on the winning side of the random number generator lottery. The only other bug that I noticed during my time with the game was one where the button to regroup your characters would on occasion disappear from the screen after a battle, leaving your two other characters in the same position until you switch and move them yourself. This can be fixed by saving and reloading, so it is not a game-breaker but it is an annoyance when you have to factor in the load times which can feel like an eternity of looking at a small dice rotating in the bottom corner of the screen. All of this feels like it is one patch away from perfection though so it isn’t the end of the road for the game.

Despite the small issues I had during my time with the game I enjoyed the hell out of it and as I am not a PC gamer, having it on the Switch means I got to enjoy a game I would ordinarily have missed out on. If your a fan of X-Com or want something that will put your tactical thinking to the test then this is the game for you.