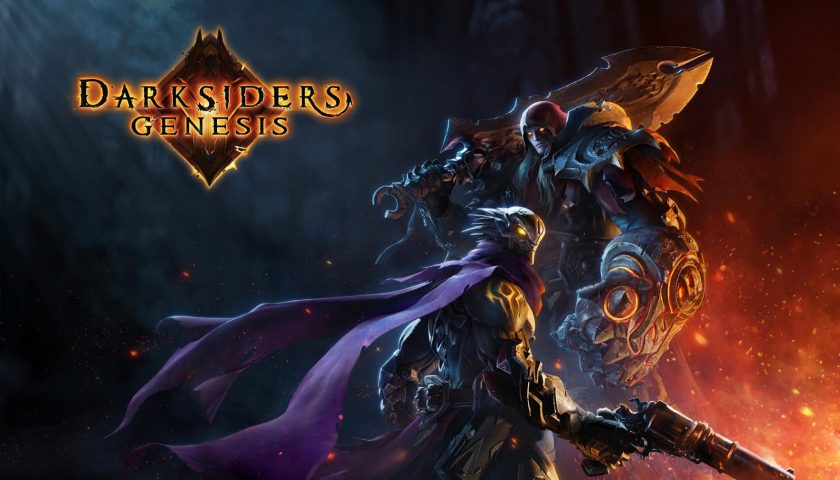 At first, the camera feels too zoomed out, the horse-bound figure a delicate miniature, the demonic creatures animated grains. But after some time, the epic feel of Darksiders settles upon this strange yet compelling title. The design is a bit weird across the board. An action platformer with boss battles and upgrades to collect, it feels like the camera should be down in the thick of things, riding War’s/Strife’s shoulder as he carves through the evil hordes. Clearly, the budget would not allow this, and so we have something of an in-between epic, where things feel meaty enough to satisfy as a full title, but not so in-depth to justify what might have been a very decent third-person action game in the vein of the previous titles.

I’m not convinced that the platforming works. I was constantly missing collectible coins floating in the air because I had no reference to determine their height. And when it comes to climbing up via grab points, the direction you feel you should be pushing will often send the character jumping off to their death. When poles enter the equation, the controls just get silly. Mario this is not, yet there are several instances whereby the world is crumbling, and you must quickly negotiate the environment. These do not feel fun at all. Thankfully, they aren’t a large part of the overall experience. Most of your time will be spent exploring atmospheric maps, solving puzzles, fighting demons and unlocking gates. Then you reach a boss, kill it and collect whichever artefact it was that you were seeking because of course, the whole game is one big fetch chain.

I don’t know about the controls on other consoles (I suspect they are almost identical), but I found some of the actions required to equip certain things or make active your optional ammo and attack sets strange. From memory, I think you need to first hold down a shoulder button, then move the left thumbstick before the menu even appears, then make your selection and let go of everything, in the hope it worked. When portal bombs entered the mix, the instructions for using those became even more laughable. It feels like they really struggled to work out the most intuitive way to implement the move sets of two characters to the controller.

The dual character aspect is interesting. I played the game entirely solo, but I hear the game sings a lot more in co-op. As a solo player, I found character switching unintuitive, again due to the awkward controller combo required. Also, due to the Switch’s small screen, combined with the game’s visual aesthetic, I often found it difficult to know exactly which character I was controlling, especially if I tried to switch a few times during a particularly busy battle. I died several times simply because I thought I was controlling War, who is much more physically gung-ho, when in fact I was controlling Strife, who is much weaker and more useful as a distance shooter.

After a while, though, I got into the rhythm of things. The upgrade system employs creature cores that you collect randomly from enemies. Collect enough of one type and a higher-grade version becomes available for slotting into your skill tree thingy, which (as far as I can tell) is the same for both characters. There are specific weapons that each character can wield, such as War’s glaive and Strife’s portal bombs, so puzzles often require you to swap to the appropriate character. They’re never very difficult, though, and the game does a decent job of showing you how to proceed.

Each mission has a recommended level that you should be before you attempt it. This, combined with the cores, promotes the replaying of earlier levels in order to strengthen both characters. The strange thing about this is that you can’t just drop into an already-completed instance. If you replay it, the whole mission is reset, and you play through it as if it is your first time, complete with every talking story scene and scripted event. Granted, you can hold down the minus button to warp back to the void (your small hub area where you can purchase upgrades), but it just feels a bit weird, as though they didn’t work out how to save the state of completed levels to just let you farm demons.

As for performance, I have not noticed any issues on Switch undocked (the only way to play). The action feels smooth, the frame rate perfectly acceptable and the general design is chunky and colourful, generally pleasing to the eye. I’ve had no issues with text size, which is a bugbear of the system for many titles, so kudos to the devs for that. It’s just a nice, action-y game that doesn’t pretend to be anything else.

It’s quite generous, too, with each chapter taking an hour or so to complete, more if you want to collect everything. And with sixteen chapters, that’s more than enough to keep you busy even if you choose to ignore the unlocked higher difficulty and New Game Plus.

In Paul’s review, he calls Darksiders Genesis a “fresh take on the established rules”. I agree that this Diablo-lite approach does have its merits. And I can also see how this might not have worked as a full-on 3D action title. Even so, this feels like more of an experimental foot in the water than a full plunge, and in that respect, I am reasonably hopeful that if this approach is attempted again in the franchise, they can smooth out the kinks and give us something truly unique.

In terms of being a Switch title – it suits the system perfectly. Play sessions can be as short or long as you want, and the game is not so deep and involving that you can’t walk away and then resume it without instantly being aware of what needs doing. It looks good, runs well and offers a decent action and levelling-up experience. I look forward to a second attempt at the formula.