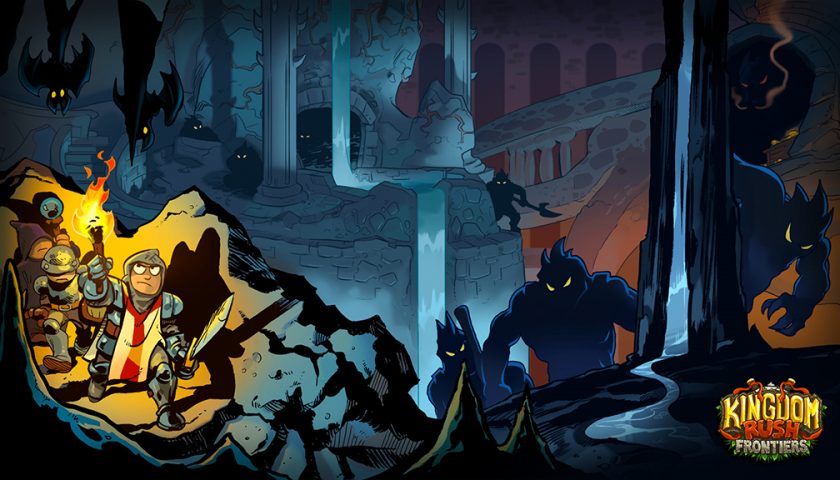 If you’re a fan of tower defence games, you may have already become addicted to Frontiers when it joined the Kingdom Rush mobile series in 2013. If not (or if you are a fan of tower defence games, yet somehow managed to totally miss this genre-leading series) then now’s your time. Kingdom Rush Frontiers has been ported to Nintendo Switch, and while it doesn’t stray far from the original mobile release, it does come with a few perks that might entice new and old players alike.

If you’re new to the genre entirely, Kingdom Rush Frontiers will make for a good introduction. Like with all good tower defence games, you have a fairly basic goal – don’t let the baddies into your base. To stop that from happening, you’ll construct a myriad of towers with a variety of different functions, from hurling attacks at the oncoming enemies to creating roadblocks to keep them in place (while the other towers continue to murder them). Ultimately, your goal is to do this over and over again, fending off a frequently changing roster of differently skilled enemies across different level layouts until you’ve conquered them all. It’s pretty simple, but that doesn’t mean there isn’t a lot of room for fun.

That said, the plot is somewhat lacking. It’s told in a cute way – short, expressive comics that basically just remind you that you’re constantly under attack in some way – but it does little to add story elements. Sometimes they’ll feature one of the heroes from your ever-growing roster, but mostly they just provide a reminder that no – you’ll never escape the onslaught. You will, however, be given four main tower types to work within your quest for peace – ranged, magic, melee, and artillery – and each of these can be upgraded in several different ways, with new skills unlocked as you progress. Ranged towers will start as simple archers, for example, but can be upskilled into expert crossbow marksmen or axe-throwers. Magic towers, once simple spellcasters, can be turned into necromancers to raise an army from the dead, or arcane mages that shoot lightning. Artillery towers will start by lobbing bombs at groups of foes but can become earthquake machines or missile launchers on legs, and melee towers provide you with the noble footsoldiers who start out weak but can shift into templars or assassins. Along with your towers, you’ll have a customisable hero, chosen from a list that unlocks slowly (and then all at once, like falling in love… or however the quote goes), with each offering its own strengths and special attacks.

You’ll soon work out a strategy that works for you as you get to learn how these towers and heroes work in combination, but it’s important to learn to adapt. If you get too attached to one strategy, it can be easy to become frustrated and fall into patterns of failure. ‘Why won’t they die?!’ You may exclaim at volume, as you refuse to accept that your tried-and-true method of pummelling adversaries with magic isn’t working on these specifically magic-resistant foes. So try something new. Each new level comes with its own enemies, and often only once you’ve tried and failed a level a couple of times will you learn its tricks. Some levels include unique units that can be used to your advantage, or annoying background enemies that must be dealt with. Survey the area, learn your enemies strengths and weaknesses, and push on through. Initially, I found the difficulty curve post-tutorial levels a little annoying, until I got myself into this mindset. At that point, I truly managed to go into a kind of flow state.

Of course, being forced to replay levels to master them is fun until you get right towards the end of the game when levels can go for around 45 minutes at a time with no checkpoints. It’s frustrating to make it through the first half-hour thinking everything’s going fine, only to be slammed by a huge wave of enemies that storm your defences and render that half-hour useless. Thankfully, the fact that you can put the Switch into hibernation means that you can take a break from these long levels to make an energy-sustaining coffee, but if you wanted to change to a different game, you’re out of luck. The game does offer three difficulty levels so that you can cool things off if you’re struggling, but even on the ‘casual’ difficulty, it didn’t feel easy. There is, unfortunately, some frustration that can’t be overcome – but that does also seem to be a hallmark of the genre.

As a port, not much is changed from its mobile roots. If you’re playing in handheld mode, most of the controls will be the same. You can select, build and upgrade towers using the touch screen, and the shoulder buttons will deploy your heroes or special attacks to different areas of the map. You can also use the joysticks to move between buildings, but this can get a little fiddly – it doesn’t like moving diagonally, and yet a lot of the towers are bunched in neat little triangles. It’s a little finicky, but it’s perfectly possible to dock your switch so that you can see your battle on the big screen and better identify different enemy types. While the touch screen is great for selecting towers, this is its one flaw – things can get cramped. It doesn’t feel too congested in handheld mode for the most part – only when things get particularly hectic – but it can be tricky to see minute differences between enemies of different types. No more difficult than it would be on a phone screen, however, so this is hardly a failing of the Switch port itself.

The other big difference is the lack of microtransactions. The mobile version of this game, which sold for a fraction of the price, forced players to fork over extra cash for the full roster of heroes and abilities, whereas here you’ll get the whole lot. If having everything unlocked doesn’t matter to you, that might not be much of a drawcard, but if you want to be able to experience the full range of potential strategies and hero/tower combinations, purchasing the game in full is the best way to do it.

Despite a few nitpicky frustrations, I had a lot of fun with this game. It has replayability, a solid learning curve, and it taps right into the same part of my brain that got addicted to Ninjatown on the Nintendo DS back in 2008 (an obscure choice, I realise, but on the off chance there are Ninjatown fans out there – this is the same good stuff). So if tower defence games are your thing, or you think they might be, definitely give this a go. And the good news is, if you want more, there’s a whole series of these games ready for downloading to your phone for more defending of towers on the go!