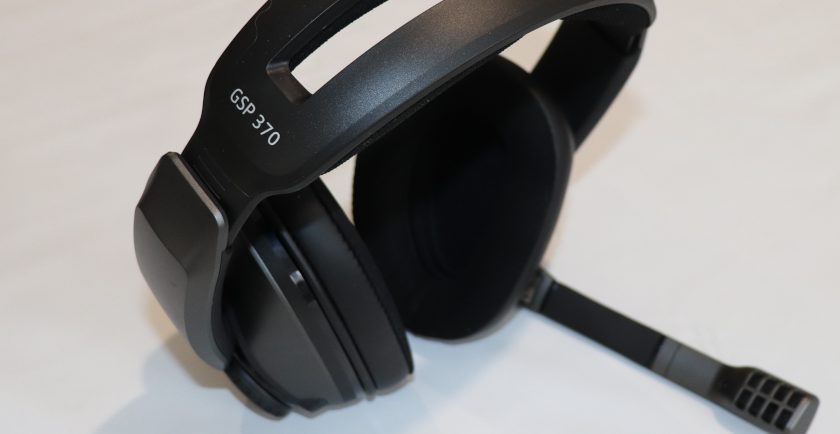 As a parent of both a toddler and a newborn, most of my gaming tends to be done late at night with a headset on – most recently an ageing pair of Monster Inspiration, close to a decade old at this point after the battery in my PlayStation Gold Wireless Headset struggled to keep a charge longer than 6 hours. Outside of gaming, I jump between a pair of Bose QC35 and Sony wh-1000xm3’s almost daily, both of which are well-regarded sets which now retail under $400AU a piece. With the Sennheiser GSP 370 selling for almost $350AU at the time of review, from the moment it arrived on my doorstep this headset had its work cut out for it; how could it compare to my ‘daily drivers’ in regards to battery life, sound quality, ease of use and price?

Opening the box, I was impressed with Sennheiser’s minimalist approach to packaging and contents – the USB dongle, headset, charging cable and instruction booklet were well packed and easy to remove, streamlining the setup process to a few minutes which mostly involved inserting the dongle into the front of my PlayStation console and locating the power switch on the headset itself. Design-wise, the GSP 370 headset is not the sleekest with a completely plastic construction; it impresses in both the hands and on the head with its lightweight nature but doesn’t feel overly robust and I wasn’t confident it would survive a round or two with my toddler. The earcups themselves are set back at an angle which looks more off-putting than it feels, the ample padding on both ears and headband ensuring a fit that is tight without causing discomfort as some headsets can be after an extended gaming session. The right earcup features an easily accessible volume knob which is a great feature, allowing precise control over volume levels without having to enter a menu or search for a button during a play interruption or heated moment in-game.

While the GSP 370 isn’t the most comfortable pair of cans I’ve worn – Bose is still ahead in this area – they certainly aren’t anywhere near the worst and after many hours spent on my head, I can’t find fault with the way they wear. Having tested the GSP 370 on the full range of platforms it is designed for, I can say that they truly are ‘Plug and Play’ – I had no problems with my PS4, Mac or PC detecting the headset nor using any of its base functions. That said, Windows 10 users will benefit the most from the optional Sennheiser Gaming Suite software which offers a range of options such as Mic settings, a less-than-stellar 7.1 virtual surround sound setting which I wouldn’t recommend and access to EQ presets and customisation, none of which are accessible on other platforms.

Soundwise, the GSP 370 are crisp and clear, with neither the focus on top or bottom end that other headsets are guilty of. As well as gaming, I put the headset through its paces with a variety of music, from Miles Davis & Esperanza Spalding to Kendrick Lamar & The Ocean. What I found in the GSP 370 is a headset capable of holding its own and in fact,exceeding a lot of other headsets on the market, a feature I would expect given Sennheiser’s reputation in the industry. While it doesn’t quite reach the heights of sonic quality provided by my Bose or Sony headsets, the discrepancy isn’t so large as to be distracting. Unfortunately, the reliance on a dongle means that the GP 370 isn’t as versatile as it could be were it a true Bluetooth headset, no doubt in service of maintaining its extremely low-latency functionality. I could definitely see this headset getting more use around my house if it were able to connect to my phone for podcasts and music.

Listening is only one half of the equation when discussing a gaming headset however, as the GSP 370 features a ‘boom arm’ active noise-cancelling mic on the left earcup which engages when lowered and remains off when in a raised position. Having played a few games online on both PC and PS4, as well as recording the latest Player 2 Pixelcast episode with the GSP 370 via Skype, I had no issues with others being able to hear and/or understand what I was saying, which is all I can ask from a gaming headset in good conscience. This isn’t a recording studio-quality condenser mic by any stretch of the imagination, but it’s not being marketed as such and the GSP 370 mic easily outshines those found in both my Bose and Sony headsets. While raising and lowering the mic to mute isn’t exactly easy to do when both hands are engaged on a keyboard and mouse or controller and furthermore interferes with audio recording, this isn’t necessarily a scenario the GSP 370 is designed for and was only a minor annoyance.

Before finishing up, there is one final feature that I personally feel boosts the GSP 370 from a good headset to a great one in my mind – battery life. Sennheiser state that a single charge can last up to 100 hours, and from my experience that is entirely accurate. The LED light located next to the charging port and power switch indicates the battery level, with red, orange, teal and green correlating to differing charge percentages. Straight out of the box, I’d estimate I’ve used the GSP 370 for between 30 and 40 hours while evaluating it and currently have just over 50% power remaining. This blows any other set I own completely out of the water, giving 4-5 times the length of use from a single charge comparatively. For your average gamer, this means charging the GSP 370 maybe once a month. For myself or anyone else who often has limited time to game due to work and/or family commitments, this should result in a period of 6-8 weeks between charges. More mind-boggling is that such a feat was achievable while still keeping the weight of the headset under 300 grams. One of the main reasons I retired my previous wireless headset was its poor battery life which would often rear its head at the worst possible times – with the slow drain rate of the GSP 370, even at 5% remaining I can be sure I’ll be able to finish up my current session and put it on charge for the next.

For $350 a pair, I think it’s reasonable to assume that the GSP 370’s will stretch the budget of most gamers. While they aren’t best-in-class in many areas, they can go toe-to-toe with plenty of other headsets on the market and leave nearly all of them in the dust when it comes to battery life. A great all-rounder boasting stamina for weeks on end, the GSP 370’s will be best suited to those who actively game online between PC and PlayStation 4 platforms, or those in the throes of early fatherhood who appreciate a long-lasting set of cans that you can still hear crying kids through.