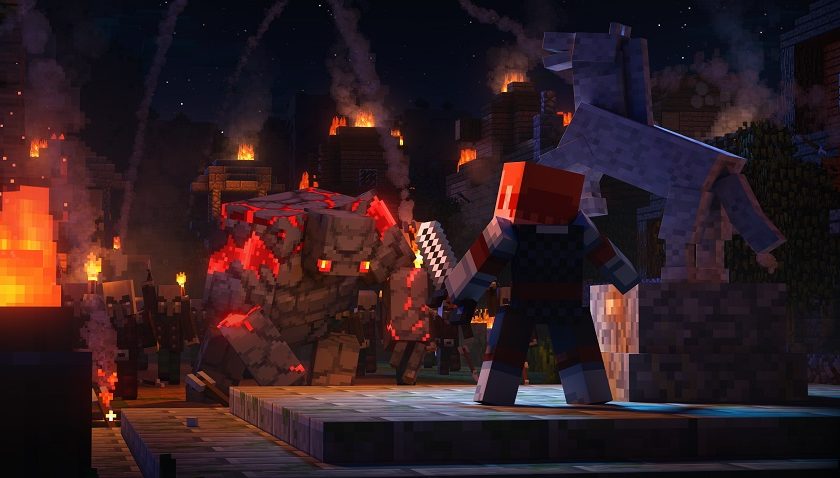 I am not a total stranger to Minecraft.  I played it for a while on PS4 back in the day, but now it is mostly played by my kids, their creativity running wild building houses, gardens and pens for their hundreds of animals.  I have moved on from the original Minecraft, but now we have a new spinoff that takes the world of Minecraft and makes you the hero in the age-old story of good versus evil.

The story is a very basic good versus evil.  A shunned outcast finds an artefact known as the Orb of Dominance.  Cue the invading hordes of creatures and evil Illagers conquering the world and turning the peaceful Villagers into slave labour.  If you don’t know what an Illager is then you are not alone, it was only after querying my eleven-year-old daughter that I was informed that Illagers is the evil counterpart to the peaceful villagers that will attack players in the world of Minecraft.  That is where you come into the game, with your newly created hero on a journey to defeat the Arch-Illager and bring peace to the world once again.  The problem with the story, apart from the fact that it is very basic, is that it is fully explained at the beginning of the game.  There is no development of the story, no twists or turns that add anything at all to the narrative.  The only extra bits of information provided is a short intro that tells you why you are in a certain area and what is your objective there, be it to free enslaved Villagers or defeat the Witches so they cannot help the Arch-Illager.  They just do not add anything to the overall story and are just there to provide the reasoning for why the player is in that particular area.

So how does Minecraft Dungeons stack up to others in the dungeon crawling genre?

Well, it’s alright, but if you were looking for something to tide you over until Diablo 4 is finally released you may be better off finding your fix elsewhere.  This is a game that is more for fans of Minecraft or those wanting to give their kids an early foray into the dungeon crawler genre.  As an entry point for kids, it is great, not overloading the player down with huge amounts of builds, items and equipment.  All players have a melee and a ranged attack and can hold three different artefacts that can be attacks, buffs or support items to help the player survive.  This means there is not an overload of different attributes for players to compare, often just coming down to ‘is it more powerful than what I currently have or not?’

In saying that though, it is possible to find yourself with a decent build, though that comes down to luck more than anything else.  For example, towards the end of my first playthrough, I had an axe that would attack anything around me in broad swings.  It had a freezing enchantment that would slow down enemies when struck and when combined with a ring of fire enchantment on my armour that burnt all enemies that were too close, it made it easy to wade into mobs and slay them, making my main concern watching for ranged attackers.  To help in this issue I had a bow that had two enchantments, one that would make the arrows pierce through enemies and continue damaging enemies behind the original target, and the other one that gave me a forty percent chance to shoot five arrows at once.  With an artefact that would provide healing and another that buffed my attack power and speed, I was unstoppable.  So much so that even when I got gear that was a higher power level of my currently equipped gear I just scrapped it, lest I ruin the ultimate setup I had found.

Oh yeah, the third artefact I had was the greatest of all.  Wonderful Wheat.  Why is it wonderful you ask?  Well, it summons a llama to your side that will spit at any enemies on screen.  Weaponised llama spit.  I love that llama and would not trade him in for the world.

The problem that you encounter is that you will eventually need gear that is more powerful to survive, but every drop is completely random.  You might get something useful to your particular playstyle, or instead, get something that is complete junk to you.  Even getting gear from the vendors in your home camp is random.  Most of the time the items I got had nothing to do with how I had set-up my character.  In the end, I gave up trying to focus on a build and just tried to make the most out of whatever gear I came across.  If there was a bonus to equipping the new gear that I could make use of then I would use it, if not I would hold off until I got something worth upgrading.

As I mentioned earlier, this is a great game to introduce the dungeon crawling genre to your kids.  Not only is it set in a world they will easily recognise and understand (most kids will experience the Minecraft Education version at some point in their school lives) but there is no gore or foul language that might make parents think it is inappropriate.  It is also a game you can use to connect and enjoy with your kids, supporting up to four players in a game, whether through local or online play.  I took some time to play it with my daughter, who for the record believes the wolf summon is better than the llama and therefore banned from playing and she and I had a ball hacking our way through the mobs, regardless of the story.  For parents that find themselves daunted by trying to understand the workings of Redstone and all the vagaries of the original Minecraft, Minecraft Dungeons will give them a world that they can easily experience with, and most importantly connect with, their kids.

While Minecraft Dungeons won’t satisfy those looking for a hardcore dungeon crawling experience, it is a great introductory game in the genre that players can use to get the basics.  If you love Minecraft, the chances are that you will get enjoyment out of this game.  If your kids love Minecraft, the chances are that it will keep them amused and give you some peace and quiet too.  Lastly, if you want a family-friendly game to play with your kids then this game is great for that opportunity as well.  While it may have its faults, at its core Minecraft Dungeons is fun to play, especially if you have someone to play it with.