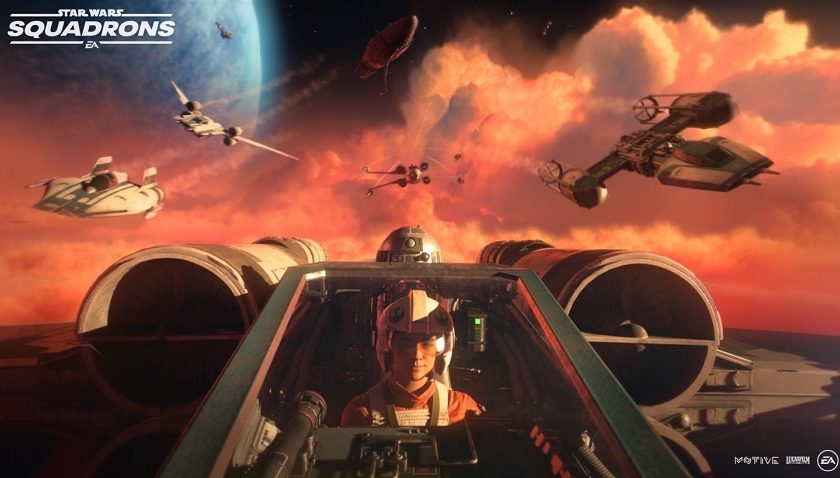 It’s time to once again take to the cockpit of an X-Wing, with EA Games announcing Star Wars: Squadrons, a first-person space dogfighting game developed by Star Wars Battlefront II team, Motive Studios, due out October 2 this year.

Walt Williams, writer of the harrowing Spec Ops: The Line, is one of the writers behind Squadrons’ single-player story, alongside Jo Berry and Mitch Dyer. Williams and Dyer previously worked together on Star Wars Battlefront II’s campaign, while Berry’s previous work includes writing for Star Wars: The Old Republic while at BioWare.

Proud to have helped write STAR WARS SQUADRONS with the incomparable @Joanna_Berry and @MitchyD. Can’t wait for y’all to hop in the cockpit and join the fight.

Squadrons is set to release across PS4, Xbox One and PC, with crossplay VR support between PC and PS4 confirmed. In addition to a single-player story, Squadrons will 5v5 multiplayer dogfights and large-scale fleet battles. Crossplay will also feature across all non-VR platforms as well, so you can play with your PC and console comrades any way you like.

For the Star Wars fans curious as to where Squadrons will fit into the increasingly packed canon, the single-player campaign will take place after the events of episode six, Return of the Jedi, during the rise of the New Republic and fall of the Galactic Empire. Here, you’ll alternate playing between two customisable characters; one belonging to the New Republic’s Vanguard Squadron, and another as part of the Galactic Empire’s Titan Squadron.

Interestingly, Squadrons will be a budget title on release, with several Australian storefronts taking pre-orders at $49.95 – a generous conversion from US’ price of $39.99. Factoring this retail price in, it will be interesting to see how much content Squadrons will launch with.

Thankfully, EA seems to be keen to avoid another microtransaction-riddled mess akin to Battlefront II’s launch. Granted Battlefront II’s in-game economy drastically improved through feedback and subsequent updates. Their press release states Squadrons will ‘will offer rich cosmetic and gameplay customisation options with rewards and bonuses that are earned solely through gameplay’. These rewards will include weapons and engines to customise ship performance, in addition to cosmetic ship and pilot items.

Star Wars: Squadrons looks to recapture the thrill of games such as X-Wing vs. TIE Fighter and the Rogue Squadron series. While we only have a cinematic reveal trailer to watch now, gameplay footage is promised for tomorrow.

It’s always safe to wait until gameplay footage before making judgement calls, but Squadrons looks damn cool and is a concept no doubt many will be excited for.