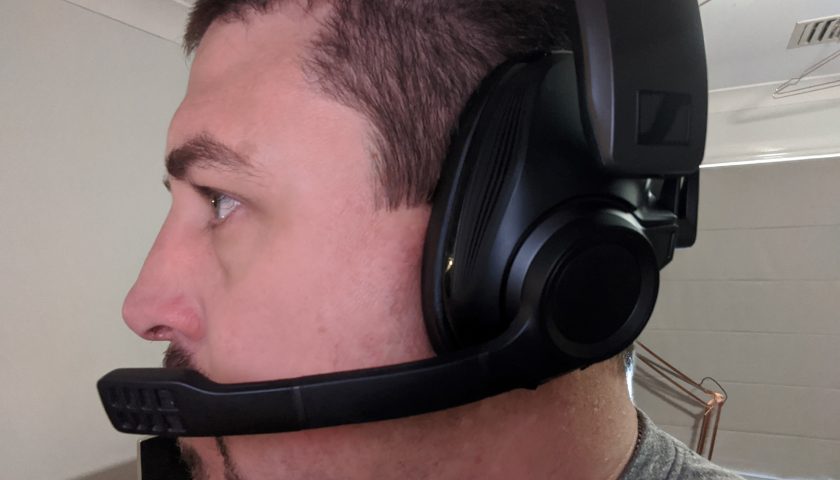 Reviewing a gaming headset is always a hard prospect, especially in this day and age. There are so many options. 2.1, 5.1, 7.1, wireless, wired, USB, AUX, the list goes on. What works for you is very likely going to cause me issues. Some people want one headset for all of their different devices while some want a dedicated audio beast for each system. So when writing about a headset it is important to keep all of that in mind and not exclude a product because it doesn’t suit your needs perfectly. Such is the case with the EPOS Sennheiser GSP 670, an undisputed, top quality headset. But it is a headset for a particular market and people outside of that market will struggle to justify the price point.

You see the GSP 670 is a wireless headset that primarily utilises a dongle to connect to either a PC or a PS4. You can also use a Bluetooth connection with your PC or phone but the dongle is the preferred method for gaming (more on that later.) Notice something missing? Yeah, that’s right, no compatibility with either the Switch or the Xbox One. This is pretty much the only downside for me as far as this headset is concerned. Being an owner of all systems, I would much prefer to have one headset to rule them all, if for nothing more than saving on the need to store multiple headsets in my entertainment area. So the fact that the GSP 670 can’t do everything is a bit of a bummer.

But, that being said, this headset is so good that it doesn’t matter in the slightest. In fact, after using them, the only disappointment I have is that I don’t have a headset of this quality for my other systems. This is easily the best set I have had the pleasure of using on the PS4 and PC. Let me start with the comfort level. The GSP 670 has wonderfully soft padding surrounding both the earcups and the headband, meaning that any part of the headset that touches my head is soft and comfortable. What’s more, the padding is of super high quality and in no way feels plasticky or flimsy like it can often do on other headsets. The ear cups fit snugly over my ears and are adjustable to suit most head sizes. Kids might struggle with it being too big and Shaq might struggle with it being too small, but just about everyone else will find a comfortable and stable setting when wearing this headset. Other great features like two volume controls, one for audio and one for chat, and a high build quality round out the design nicely.

The microphone is also surprisingly competent. I used it with multiple work calls, gaming sessions and even podcasts to great effect. The quality of voice transmission and recording is great, with no noticeable popping and virtually no background noise getting picked up, even with my kids fighting each other in the background. I have to say that the mic isn’t at the same level as my stand-alone podcasting microphone, but that would be an unreasonable expectation. This would be the perfect set for someone who wants to get into streaming or video recording and doesn’t want the expense or hassle of a multi-part recording setup. Needless to say, when it manages tasks like Podcasting as well as it does, the 670 has no issues at all when it comes to in-game chat or Discord sessions.

Now onto the important thing, the audio. Let’s face it, this is why we are here. I am pleased to say that EPOS has hit a home run here. For starters, the 7.1 sounds wonderful on both PC and PS4. I tested it with a range of games that are known for their sound design, titles like Hellblade, Forza Horizon 4 and Control and the GSP 670 kicked goals in every single one. Even older 5.1 and 2.1 games got the most of this set, trust me when I say that Kiryu Han breaking heads in Yakuza 6 has never sounded better. The multiple channels came through clearly, the use of audio cues to indicate sound direction was just about perfect. Big bombastic sounds suffered no distortion at even eardrum-shattering volume levels and tiny audio details could be heard with ease. The bass brings a deep sensation to proceedings and the treble is always crystal clear.  As far as music goes, at first, I was a little unimpressed. My go-to song for these tests, Du Hast by Rammstein, sounded hollow and gutless, but after switching to Bluetooth mode it once again became the meaty headbanger it is supposed to be. So it would seem that stereo music is better handled by Bluetooth than it is by the 7.1 dongle. I am sure that Audio guru’s out there would know why this is the case, but it was a revelation to me.

Finally, I want to talk about battery life, this is after all wireless. The box tells me I should get 16 hours of game time with the GSP 670 and honestly, it feels like I got more. These last for ages, I have had them for a month and have used them for all of my PS4 game time, plus a large chunk of my PC use (both gaming and other audio uses) and have only had to charge them twice. What’s more, it only takes an hour or so to go from 0% to full charge. Frankly that is super impressive, there is nothing worse than a gaming device that needs charging every time you go to use it (I’m looking at you PS4 controllers).

EPOS has really hit the nail on the head with the GSP 670. This is a great 7.1 headset that is perfect for gaming and a fantastic all-rounder for general PC use. The only real downsides are the relatively high price (RRP $469, but I have seen it cheaper in recent sales at JB HIFI) and the fact I can’t use it on my Switch or Xbox. Otherwise, I can’t see myself looking for another headset anytime soon, especially considering the GSP 670 comes with a two-year warranty (double what headsets usually get.) This is a very easy headset to recommend and I have no doubt that any who buys it will be more than satisfied with their purchase.