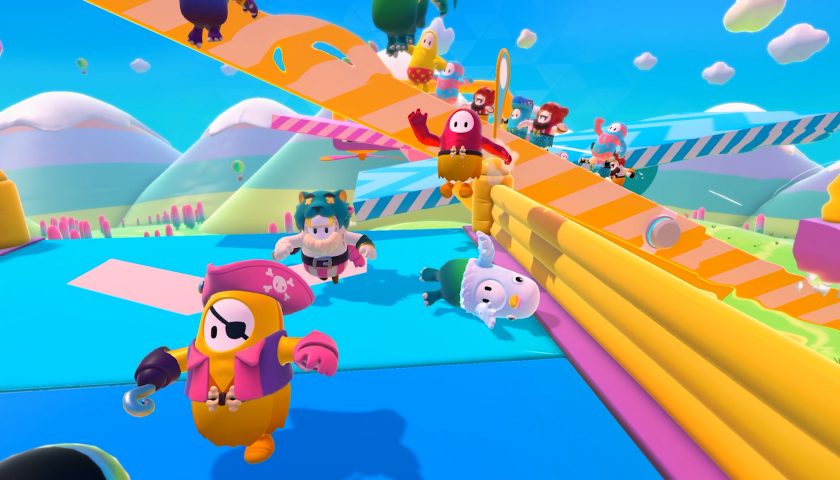 All You Need to Know Before Diving into Fall Guys

After several weekends of beta testing, Fall Guys, Devolver Digital and Mediatonic’s whacky battle royale is ready for its August 4th (US time) release on Steam and PS4 – the latter will be free during August for those with an active PlayStation Plus subscription.

Before you assume the role of a wobbly jelly bean, here’s the lowdown on what to expect when you boot it up.

A refreshing change-up to the battle royale formula

Fall Guys takes inspiration from obstacle course-based game shows such as Takeshi’s Castle and Wipeout, but removes the need for any real-life physical aptitude. In assuming the role of a bean-shaped character known as a Fall Guy, you’ll compete in a crowd of 60 players aiming to win the literal crown awarded to the last bean standing.

Each game of Fall Guys consists of multiple rounds, where portions of the 60-strong pool of participants are routinely eliminated until a winner surfaces.

From my handful of hours playing the beta, I love the fact that Fall Guys represents a rare battle royale entry that doesn’t focus on combat. Although slapstick action is in no shortage here, it’s far removed from the shooting-heavy variants dominating the genre such as Fortnite, Apex Legends and Call of Duty: Warzone. These latter examples rely on gameplay elements that take time to learn in order to be competitive, especially if you’re not someone who traditionally plays shooters. Refreshingly, Fall Guys is incredibly simple to pick up; only requiring inputs to move, jump and grab, placing the emphasis on navigating cleverly-designed courses and interacting with other players.

Other than Tetris 99, there are few battle royales that don’t rely on combat. For this reason alone, Fall Guys will appeal to players – like me – who want a change from large-scale multiplayer games focused on killing things.

25 courses of hilarity await you

Each game of Fall Guys is different from the last. Every round is randomly drawn from one of 25 unique levels, ranging from grand obstacle courses littered with moving parts, to team-based activities encouraging uneasy truces before hostilities resume should your team progress.

Among the 25 courses is a strong amount of variety, meaning that not every game will favour the exact same set of skills. For example, the first round will normally feature a large race-to-the-finish where the top-40-odd will proceed, eliminating anyone after the cutoff. However, other challenges include trying to last on a giant rolling platform, playing a perilous game of memory, or teaming up to win a hectic game of soccer with oversized balls. The soccer balls that is, not your- never mind…

This even extends to the final, winner-determining rounds. One such variant is a not-so-simple race to grab the crown at the end, while another tense final showdown sees the remaining contestants attempt to be the last one standing on a series of falling platforms suspended above a pit of slime.

When you’re not laughing at the regular bottlenecks of Fall Guys rag-dolling through tight corridors, you’re clenching your cheeks while trying to survive tense standoffs.

If you’re curious about how Fall Guys was made, check out Devolver’s ‘Behind the Schemes’ video introducing many of the Mediatonic team members.

Any issues to be aware of?

While my Fall Guys beta experience was largely positive, several things stuck out as potential issues.

Firstly, latency was prevalent on several courses reliant on direct input with other players, such as soccer and the tail-collecting rounds. Particularly when playing the latter, which required you to steal a tail from other players and end the round wearing one to proceed, I had a rough time. Often, other players would steal my tail despite appearing on my screen as too far away to grab me. Additionally, when playing soccer, it was impossible for me to make reliable contact with the ball due to latency. Do I sound salty? You bet I was salty!

Thankfully, the majority of Fall Guys’ rounds were not hampered by any connectivity issues, although I did notice delays between crossing finish lines and the game registering my place at times. Granted, this was during a beta period, so here’s hoping the full release is smoother and has Australian server support.

Additionally, I hope Fall Guys introduces mechanisms to deal with griefing. Towards the end of the beta, I noticed some players in team events throwing games and not cooperating with teammates, which makes for a frustrating time. Also, during races to the finish, small groups of players hover just before the end, showboating and trying to grab others. On one hand, this adds one last obstacle to overcome before finishing. On the other hand, this comes across as poor sportsmanship and delays progressing the game forward if they’re among the last qualifiers required.

Will Fall Guys last the distance?

As wonderfully designed as the 25 courses are, I did start to want for more variety, especially given my latency issues with particular variants. However, Fall Guys will implement in-game seasons as popularised by many other battle royales, indicating there will be plenty of post-launch support to come. If more courses are regularly added, I can envision returning to Fall Guys for a long time to come.

As part of Fall Guys’ seasons, you’ll level up and earn Kudos to spend on cosmetics and silly outfits for your Fall Guy. Also worth noting, as confirmed in Mediatonic’s support section, microtransactions are included as a method of purchasing Kudos with real money in addition to earning them in-game. Crowns are another form of in-game currency earned by winning and periodically received when levelling up.

Regardless of all Fall Guys’ extraneous details, it’s absolutely worth checking out, even for a little bit, especially with friends. While no leaderboards will feature at launch, there will be plenty of rivalries when partying up with your mates to be the last Fall Guy standing. If nothing else, Fall Guys embodies the chaotic spirit of 2020, albeit in a significantly more fun and delightful way.

Fall Guys has just launched on Steam and PS4. PlayStation Plus subscribers, don’t forget to grab the game at no extra cost!