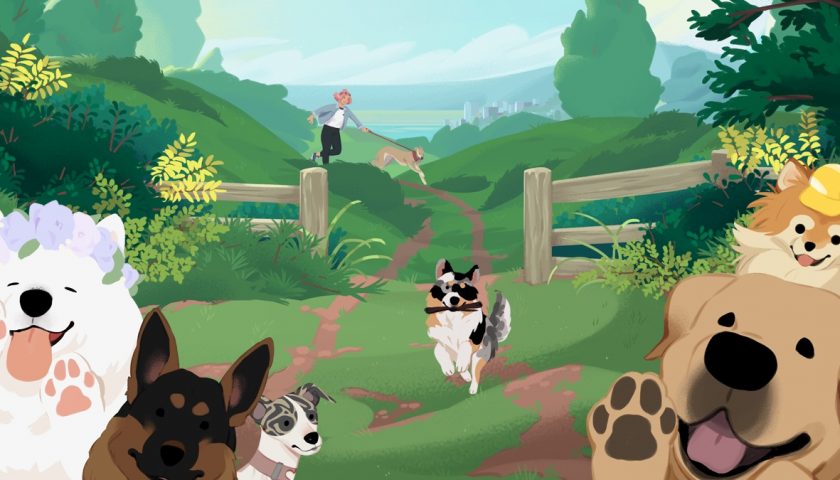 What do you do when you want to instantly convey that your game is going to be colourful, diverse and filled with welcoming and wholesome vibes? You set it in a place called Rainbow Bay, and you make it all about dogs. Best Friend Forever is exactly that – a diverse, wholesome dating sim set in a town where pretty much everyone (including you) owns at least one dog, making it the best setting for a game ever. You date cuties in a gorgeous town, while also mastering the art of dog ownership. From the moment it begins, this game, developed by indie studio Starcolt, knows exactly what it’s about – and it mostly succeeds in delivering, if you can excuse a few niggling problems.

From the get-go, it’s clear that this game has diversity as one of its main focuses. You’ll begin the game by creating your character, choosing from three preset physical options (all of whom are cute) and then separately choosing pronouns, along with a name, star sign, and blood type for your character. You’re asked about these things under the guise of creating a profile for ‘Woofr’, the local dating app, along with a series of multiple-choice questions about your feelings towards certain situations, predicaments or personality types. Even though I’m not sure they had a whole lot of bearing on how the rest of the game played out, these questions were fun to read through and answer and give you a good idea of how great the humour is going to be in the rest of the game. When it asked me “how do you feel about being mugged”, for example, and I gave my real life answer of “not great, really” at the same time as the game presented me with those exact words as one of the possible responses, I immediately realised that this was a game that understood me. I was in for a good time.

Once your profile is complete, you’ll be sent out into the world to begin meeting the town’s residents – including your new best friend (a dog, of course). A trip to the shelter will present you with four options for your furry friend, all of whom are adorable and all of whom are the bestest boys/girls. They come with backstories and preset names, but you are free to rename them. I went with Cheeseball, the troublesome shiba inu, but would like to give an honourable mention to Cardigan, the chunky staffy. What a good name. No matter which dog you choose, they will be by your side through interactions with the townspeople, accompanying you on dates and generally providing cuteness and occasional frustration. But I guess that’s what dog ownership is all about?

Despite the dog being with you always, Best Friend Forever’s gameplay can largely be split into two sections – the days you’ll spend dating, and the week planning you do in-between in order to train up and care for your dog. During the week, you are given an allocated amount of energy to spend on encounters or extra time with your dog (both of which use very little energy), dates (which use a little more), or the occasional unavoidable “big event”, which is usually a town-wide affair. Through these events, you can choose who to date, make some friends on the side, or ignore romance entirely and focus on making your dog the best they can be. You won’t be able to date everyone on one run-through, and you only have fifteen weeks to train up your dog and find love, so you’ll have to be focused and decide where your priorities lie.

Clever writing ensures that the interactions with all the potential love interests are fun, but the nature of the romance will change depending on whose path you choose. Some suitors will be more interested in jumping into the physical side of things, while others will be more reserved – either because there are other things going on during your often chaotic dates, or because making space for you in their lives takes a little time. It’s a nice mix, but it did leave me feeling as though there was an imbalance in the ‘dates’. In the cases of several love interests, their dates barely involved any interaction with them at all – it was all about asking others to help you run errands for them, or find them gifts. It was still fun, but it didn’t really feel like I was getting to know the person I was there for, so in a few cases I was left a little disappointed, especially when some of the other dates really felt like they were strengthening a connection with the chosen character. But, slight imbalance aside, I would really like to praise the diversity of the love interests in this game. There is a wide variety of genders and personalities, yes, but it goes even further than that. Earlier this year I was lucky enough to interview Lucy Morris, who is the head of Starcolt, and she expressed just how important it was to include diverse body types in games – and that commitment to representing all kinds of body types is very present here. It was so refreshing to see individuals who weren’t white, who weren’t thin, who had disabilities, who weren’t cis, but who were all babes in their own unique ways. My bisexual heart was very torn when I was making my choice because they were all such interesting characters with diverse backgrounds to explore, and this character and narrative design is truly where this game shines.

The dog care side of the game is where things start to fall a little flat. Each week you’ll choose a set of activities for your dog to do, all of which will build up their stats in a particular area. They all came with their own cute little animation but choosing which skills to build up often felt a little inconsistent. I did just as well when I randomly clicked down the line without thinking as I did when I painstakingly curated each week’s activities. It never really seemed to matter, and felt a little repetitive. The same was true for the “care” and “tend” activities you need to choose from in order to keep your dog healthy. Each action will fill some of the dog’s needs, like hunger or thirst, but despite there being a wide variety of activities available, I found myself doing the same ones over and over again. No matter what I chose to make my dog do during the week, it would still be starving every time, so I’d always be choosing the same feeding interaction. It’s possible that there was some deep strategy to that part of the game that I missed, but to me, it always felt like busywork.

The dog will provide you with constant busywork like that, even when you’re talking to others. Mid-conversation it will require you to pick up its poop, or click and drag it sideways to stop it from chewing on a companion or digging. At first, these interactions were kind of cute, but after a while, they became a little tiresome. They do keep the dog involved in the scenes, which can be nice, but they can also be a little glitchy. A popup shows you what changes in the dog’s health or skills are occurring when you succeed or fail with one of these events, but it was hard to know whether or not they were impacting any real change. It never really felt like they were. That can be said for several things in this game, really – a lot of the actions and choices feel a little superficial. I wanted the mechanics to go a little deeper, but many of them only scratched the surface. I could forgive it, because the game was so charming, but there were times when I wanted more, and the game didn’t quite deliver. Like the inbox that I was introduced to early in the game, which I never received mail in beyond the first scene. Or the blood type I chose at the beginning of the game, which never came up again. There were elements that felt forgotten, or a little unfinished, that I wish had either been removed entirely or properly utilised.

Overall, I’ll remember Best Friend Forever positively. It had a fantastic dialogue style reminiscent of Dream Daddy, though it lacked some of the polish that made Dream Daddy replayable. I wish there was an easier way to skip through the dog sim parts of Best Friend Forever to pursue romances with all the characters because starting a new game and going through the motions from the beginning every time is a real deterrent. If I could just date cuties while my dog was also there, I think I’d be more inclined to spend more time exploring all avenues of this game, but others may find themselves more than willing to persevere through the busywork. The art style is lovely, the dogs are adorable, and the amount of love that’s gone into this game is so apparent. It has its problems, and it can be a little glitchy, but I believe that once those glitches are fixed, this will be a cute experience to remember.

Best Friend Forever was reviewed on PC with code kindly supplied by the developer.