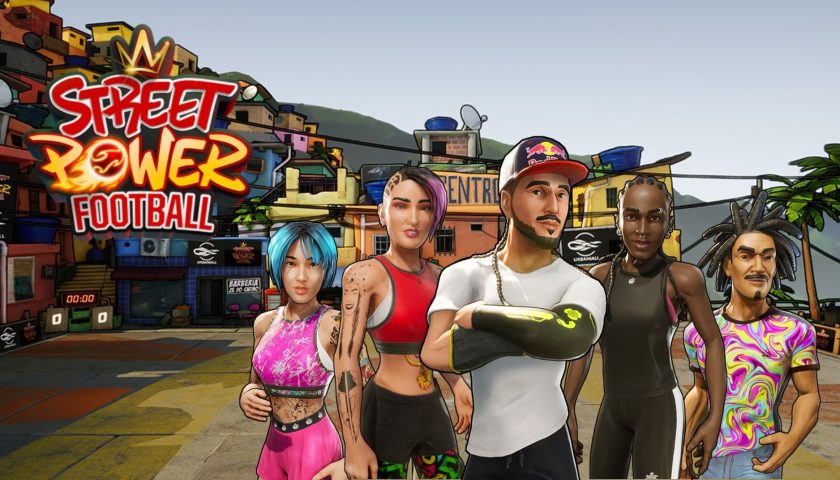 Street Power Football from SFL Interactive sets out to place you in the middle of the street football scene, working your way up from newcomer to king of the street.  To become the king, you will need to master the four different street arts.  Unfortunately, a few key design decisions mar the potential of this spiritual successor to the Fifa Street series, leaving the player feeling irritated and with the potential for a broken controller.

Embarking on your journey to greatness in the story mode you are treated to a message from Sean Garnier, the first-ever champion of the Red Bull Street Style World Finals.  Sean is French, but rather than have subtitles for the translation, the player is instead treated to a cinematic with an English dub that would not look out of place in classic Hong Kong cinema.  This cinematic, with Sean’s desynched mouth movements, introduces you to the different game modes you will undertake on your journey before sending you on your way.

What follows is a whirlwind introduction to the four different game modes you must master on your journey.  The problem is that you spend so little time in each of the game modes that you don’t really get a feel for them.  The game holds your hand through the most basic objectives and as soon as you complete them you are sent on to the next “challenge”.  In a game where you are meant to build up your skills to become the best, by not challenging the player from the beginning and forcing them to use the skills they have learned, the player (and obviously in this case I am referring to myself) will simply forget what they are supposed to do by the time it comes to compete in that event.  Not a big deal in the 3-on-3 soccer match, what you are doing in that is rather self-explanatory, a freestyle match, not so much.

It’s not just that the player is rushed through the game modes when they are first learning them either.  Each of the four modes has something that negatively impacts the experience of the player.  It can be as simple as the street games feeling like they drag on too long, the Panna games of skill that are reduced to barely more than QTE’s or the decision to not have trick inputs on the screen during a freestyle match, necessitating constant pausing of the game to check the inputs.  What was most frustrating though was trying to complete the trick shots.  Trying to line up these shots correctly when the camera is offset from the player means you will have a lot of missed shots and wasted time.  The number of times I had to redo a trick shot course because I could not find the specific angle that I had to shoot at, well it was enough to make me rage quit more than once.

There are other decisions that I just cannot figure out the reasoning behind as well.  It was someone’s job to record and implement all of the sound effects for the game, from the sounds of the ball bouncing off the different surfaces and the sound of shoes running around on the streets.  It would not have been a two-minute job to record and implement the numerous different, and yet for some reason, the default volume of the game’s music is set to a level that drowns all of the sound effects under European dance beats.

The sound decision is nothing compared to the decision to not have any matchmaking available to players looking to take on real-life opponents.  As I was playing for this review I tried to find a multiplayer match against which I could test my meagre skills, but it was not to be.  Instead of being able to search for an opponent to play against I found that the only option I had was to send an invite directly.  When making a game based on what is realistically a niche sport, having the opportunity to find a live opponent is what can keep players actively engaged with the game.

It is a shame that these kinds of decisions were made because it is obvious that the developers have put a lot of effort into the game.  The cell shading art style fits with the arcadey feel that the game is trying to achieve, and the vibrant colours in the character models really help to make them pop and stand out, and while the euro-dance beats can drown out the sound effects by default, the music is a great fit for the type of events the game is based on and the locations the game portrays.

Despite there being potential behind Street Power Football, the design decisions hold back that potential while the lack of online matchmaking will prevent those people who do have the game from being able to find worthwhile challengers.  With these issues, I think the game will struggle to retain the player base needed to keep the game alive.