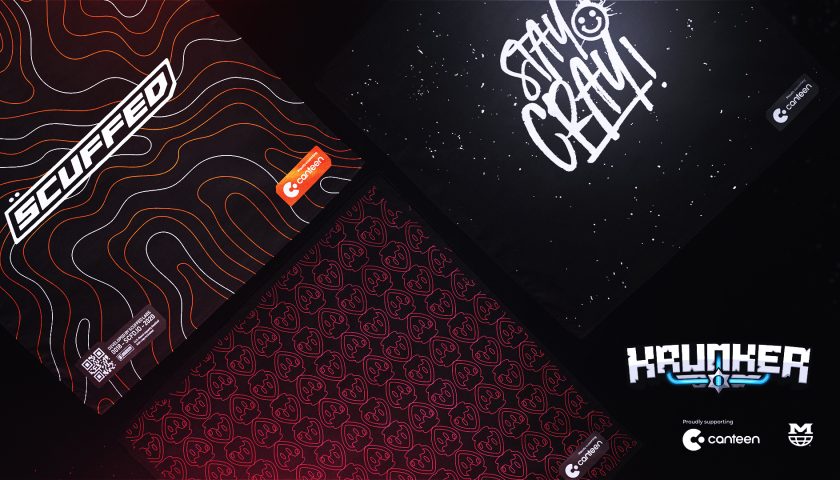 There is one fundamental aspect of the Player 2 crew that is important to me. That we do what we can to help those who need it. Whether it be by our own efforts, or by joining in someone else’s.

Today is Canteen’s Bandanna Day, to raise funds, awareness and support for young people affected by cancer. And to do their part, 14 of Australia’s biggest influencers and streamers will be participating in a charity tournament today, 30 October 2020 at 8.00pm AEDT

Two teams of 7 players each, featuring Australia’s Misfits crew (including Fitz, Swaggersouls, Inotorious, Zuckles, Mau and TobyontheTele) as well as other streamers such as Crayator, Loserfruit, Berticuss, Aliythia, HeyimBee, Bordie and Quack, will face off in a series of games modes on Krunker.io, a browser-based FPS shooter. The winning team will have $10,000 donated to Canteen on their behalf by Yendis Entertainment, developer and publisher of Krunker.io.

In addition, in-game cosmetics and IRL customised bandannas will be available for purchase, with proceeds also donated to Canteen. Anyone watching can also donate directly to Canteen’s Bandanna Day at www.bandannaday.org.au.

Canteen is a national not-for-profit organisation that supports youths and young adults who are impacted by cancer, whether by their own diagnosis or someone in their family.

So catch the tournament tonight, and donate through your avenue of choice to Canteen, and support their very important work.

More details in the news released below.

Fourteen of Australia’s biggest influencers will face off in a Krunker.io charity tournament for Bandanna Day on Friday 30 October.

Fourteen of Australia’s biggest influencers will come together to raise funds for Canteen’s Bandanna Day in a huge Krunker.io charity tournament this Friday.

To promote Canteen’s biggest awareness and fundraising day, fourteen fan favourite creators including Crayator, Loserfruit, Swaggersouls and Fitz, will be taking part in a 7v7 Krunker.io tournament on Bandanna Day, this Friday 30 October. Krunker.io is a 3D Browser FPS Shooter by Yendis Entertainment that gives power to players to create custom maps and modes.

Featuring a rotating series of unique game modes from Krunker.io, the tournament will see two teams of seven creators going head to head in an effort to secure wins, rack up points and claim victory all while raising awareness for Bandanna Day and drawing attention to the positive impact Canteen support services have on young people impacted by cancer. Featuring nationally recognisable faces, fan favourites and Krunker.io representatives, the two teams will be vying for a $10,000 AUD prize pool, provided by Krunker.io publisher and developer Yendis Entertainment, to be donated on behalf of the winning team to Canteen.

Cassandra Birch, Community Fundraising Manager at Canteen says, “Canteen is excited to be involved in this once-in-a-lifetime opportunity to pair with some of Australia’s most influential streamers, helping us to extend our reach into their online community. This virtual initiative will not only allow us to explore and embrace this incredibly rich digital community, it will allow us to reach even more young people impacted by cancer which is our mission.”

Australia’s Misfits crew will lead one team featuring Fitz, Swaggersouls, Inotorious, Zuckles, Mau, Tobyonthetele joined by Krunker.io streamer HeyimZed, and will face off against local talent Loserfruit, Crayator, Berticuss, Aliythia, HeyimBee, Bordie and Quack. Australian shoutcaster and streamer Aussie Antics will be calling the action throughout the night, as dedicated commentator for the tournament. Each team will play through the following popular map modes as they secure points and climb towards victory.

In an all too familiar game mode, teams will need to defend or defuse a bomb against the opposition. With 2 minutes per match, teams will secure one point if they manage to hold out, or defuse.

Boss Rush will see each team take on the ultimate enemy, a giant Swaggersouls helm. With repeated runs, the team to take down the Boss the fastest will score the most points.

Hardpoint
In Hardpoint, players are tasked with sieging the enemy base, all while protecting their own. In a classic case of the best defense is a good offense, teams will play across three different maps to secure and hold a checkpoint in the opposing territory while ensuring theirs is safe.

Deathrun brings a classic FPS multiplayer mode to the spotlight, as teams are tasked to retrieve the enemy flag and return it to their base. This capture the flag format will feature a custom made map.

The tournament is set to be played on custom maps, designed specifically for the game modes and will feature bespoke Bandanna Day branding. These maps will be available to the public on Friday 30 October, and across the weekend for a limited time. In addition to custom maps, Krunker.io players will be able to purchase in-game cosmetics for their character and items with the Canteen partner code, with proceeds being donated to Bandanna Day. Fans of The Misfits, Loserfruit and Crayator will also be able to purchase real life custom influencer bandannas from Scuffed.store/canteen, with all proceeds also going to charity.

“The entire krunker.io team is excited to support the Canteen Bandanna Day in cooperation with Misfits Management Group. We are looking forward to a thrilling event that will support a great organisation” Says Krunker.io co-developer Sidney De Vries, on behalf of the team.

The tournament will kick off at 8:00pm AEDT on Friday, 30 October. Fans will be able to tune into their favourite participating streamer’s channels to catch all the action pan out across the evening.

In addition to facilitating the partnership with Krunker.io and Canteen, Australian talent agency Misfits Management Group (MMG) have also added the extra weight from their roster behind Bandanna Day with Daniel Harrison streaming throughout the day to raise awareness

“On behalf of Misfits Management Group we couldn’t be more thrilled to support and give a platform to Canteen’s Bandanna Day. It’s with the utmost anticipatory excitement that we’ve collaborated with Canteen and Krunker to take fundraising to the next level and create impactful moments within the gaming community (for a great cause), which will be the first of many to come in the future” Says Sonia Ferraro, Director of Talent at Misfits Management Group