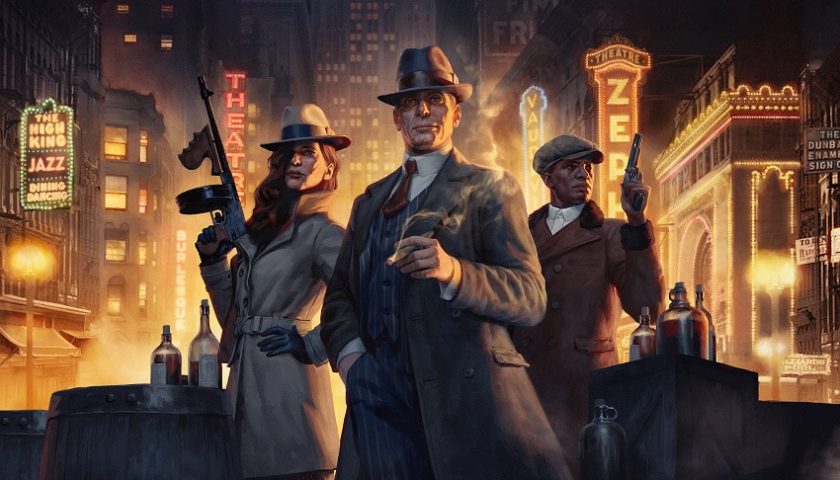 There’s something intoxicating about the roaring twenties, and I don’t just mean the thriving speakeasy scene that spawned from the prohibition era. It’s a time closely associated with jazzy numbers, slick fashion, secrets, intrigue, and mobs running wild, and Empire of Sin sets out to embrace it all. This tactical RPG mixed with a city building simulator puts you in the shoes of a mob boss with big dreams of taking over the city of Chicago – a lofty goal that requires you to manage diplomatic relations with the city’s other gangs, keep your team of loyal gangsters happy and fight for buildings all across town. There’s a lot going on in this game, and it’s all happening in a world that successfully captures the simultaneously glamorous and dangerous nature of the 1920s. It’s lousy with ingredients for a swell time, but is it the bee’s knees? I want to say yes, but aside from a few solid points, Empire of Sin has put me behind the eight ball. It also got me googling some time-appropriate slang.

From the get-go, this game really shines when it comes to atmosphere and immersion. You’re presented with a selection of fourteen unique mob bosses to choose from, some of whom you’ll recognise alongside some fresh faces. You might be drawn to play the notorious “Scarface” himself, Al Capone, or you might (like me) be more interested in the fictional approach. I first chose fictional ringleader Maggie Dyer, leader of the “White City Circus” gang, because she is an actual lion tamer who is described as having a “way with words”, and she’s covered in some badass tattoos. The leader you choose will come with their own sordid backstory, with each having a unique connection to the city of Chicago and their own solid motivation for wanting to be on top. it’s very easy to get invested in your chosen gangster’s rise to the top. They each have their own combat and business perks, so you can choose based on strategy, but I recommend starting with the one whose vibe you’re most drawn to because it’s stories that will keep you pushing through the slog of combat. But we’ll come back to that.

The leaders aren’t the only characters with colourful lives and interpersonal drama. Most of your attention will go towards managing your mobster’s relationships with other gang leaders by initiating “sitdowns”, where you talk through potential deals or just try to threaten them until they yield, but more often than not the sitdowns just seem to be opportunities to make your characters talk smack. The real drama and intrigue is in the relationships your loyal associates will develop with each other, and the ones you’ll encounter in what may seem like simple side quests at first, but which often hide ulterior motives. A lot of characters in this game will give you side quests that seem to be about settling some criminal scores, but that ends up being about jilted lovers. Your crewmates might even fall in love with each other if they spend enough time together, and when one dies, you might have to deal with an enforcer in mourning. It adds a fun twist to what can often be a shallow part of tactical games like this – you don’t just have nameless henchmen, you have associates with lives and feelings. It’s an unexpectedly diverse and accepting world, too. On multiple occasions, my recruits entered into same-sex relationships, and a bunch of the side quests were about queer couples. I even managed to accidentally choose a queer protagonist, without expecting that to be possible and got caught up in some solid lesbian ex drama. Gender isn’t really a big deal in the game either, and while gang members might use gendered pronouns to refer to each other in conversations occasionally, their profiles don’t include them at all. Everyone just is who they are. It’s definitely a more progressive 1920’s than I was expecting.

With the help of your associates (when they can put their personal lives aside), your main goal is to run the town by taking on as many rackets that you can and making them turn a profit. You can buy buildings (which is often too expensive) or you can take the easier way out and fight for them, and either take over the existing business or turn it into whatever you choose. Speakeasies, brothels, and casinos all cost money to run but bring in cash, and you’ll need breweries to make sure the alcohol at your other joints is flowing. Upgrading the security will deter police and other gangs from raiding your establishments, but you’ll have to balance this need with the desire to produce better quality products. Money isn’t easy to come by when you’re trying to establish an empire, and growth can be slow, so you have to choose carefully. That, or just keep attacking rival gang buildings and stealing all their money, which is definitely the easy way out. Well, most of the time. Sometimes it’s just all you can do.

The fighting system in Empire of Sin is similar to XCOM – your units will battle it out in turns inside or out on the streets of Chicago, utilising various objects for differing levels of cover and playing to their individual strengths. Some characters will use ranged weapons, some will prefer to use their fists, and others use their charm and influence to encourage others to do their dirty work. It’s fun the first few times you go through it when there’s variation in the arenas, but after a while, it all feels like an unbalanced grind. When you’re using your curated team of gangsters and ambushing an establishment, it can feel too easy as you outnumber and overpower your unsuspecting victims. When a rival gang attacks one of your establishments, you can be forced to sit through and watch their numerous thugs gun down your guards without the ability to do much about it. It quickly starts to feel like going through the motions, and often there’s little consequence for winning or losing. It just feels like you’re killing time until you accidentally fall into prosperity, or the game gives you another meaningful mission to tackle. It just… stops being fun.

Everything in the game feels slower than it should. A lot of it progresses with the passage of time, so you’re often left waiting for more money to accrue, or your underlings to upskill, or a building to be ready to ransack again. While you’re waiting, you might want to send your crew to investigate another part of town, but because they’re also doing that in a sort of real-time, it can be a painful few in-game days while you wait for them to simply walk from one side of a neighbourhood to the other. It feels like there should be an option to speed forward to keep things moving, but it isn’t there, and the game suffers for it. Sometimes your gangsters will fast travel and avoid this problem, but not consistently. Sadly, this game is riddled with inconsistencies, along with some bugs that get rid of quest markers or squadmates mid-fight, or that will simply freeze you in the middle of a fight with no option but to reload a previous save. The game autosaves, but again, inconsistently, and when the fights are often tedious this can feel like a frustrating punishment.

There’s a lot to like about Empire of Sin, but in reaching high and trying to combine several gameplay elements, it only manages to drag itself back down into ‘average’ territory. When I was caught up in a plot-relevant ambush, or deep in Rosie and Nellie’s relationship drama, there was enough to keep me interested. But as soon as things got slow and there was a break in triggering new missions, it became a little hard to find the motivation to push through. Overall, I spent most of the time just wishing Empire of Sin felt a little less like a grind because there are some really solid bones underneath it all. The well-developed personality and relationship systems are a highlight, but they’re sadly overshadowed by repetitive fights and slow game progression. If tactical strategy games are your thing, you might want to give Empire of Sin a chance, because it hits a lot of the notes that publisher Paradox Interactive is known for – you just might also want to chuck on a TV show in the background to fill in the time you’ll spend waiting to progress in any meaningful way.