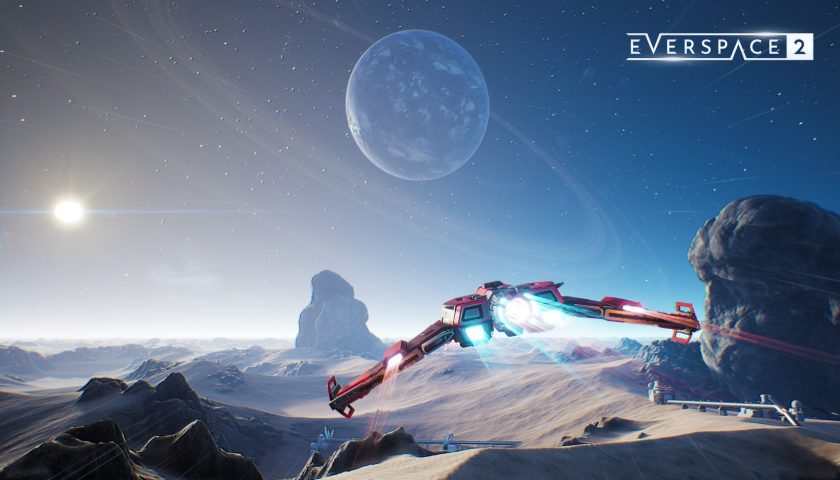 The fun little rogue-like Everspace, a game that brought the roguelike genre to spaceship battles, has a sequel releasing into early access today. The funny thing is, the core roguelike gameplay loop of the first game has gone and in its place is a full-on Space RPG. After really enjoying the first game and being excited by an early alpha, I was very keen to get my hands on the early access build last week and I have been eagerly exploring the dim dark reaches of outer space ever since.

As I said, the roguelike elements are gone. The story caters for this with the fact that Adam, the player’s character, broke the Clone/Rebirth cycle in the events of the first game, in the process upsetting some really powerful people. So living on the edge of the system, staying out of the watchful eye of his previous employees, Adam has to make a living as a pilot and in the process earn his freedom. It is a nice setup to what is shaping up to be a cracking outer space adventure and while the writing and voice acting isn’t the greatest, there is enough here to keep me invested and give me sufficient reason to keep exploring the vast reaches of space.

There seems to be a wonderful range of mission types, from finding and activating beacons, to stealing medical supplies, to eradicating pirates. Each main mission has multiple steps to complete and they quite often turn in unexpected directions. There are a host of smaller side missions as well, which are generally of the standard RPG variety. You know the drill, go here, shoot that, collect this. This is mitigated by the fact that instead of some weary adventuring wizard, I am playing in an armed to the teeth space fighter ship, so it gives a new perspective on these simple, oft experienced quests.

Just like any other RPG, Everspace spends a lot of time on loot and experience levelling. Loot is found throughout the system, in derelict space vessels, in the remains of destroyed enemies and hidden away in the various nooks and crannies that are just begging to be explored. This loot comes in the form of crafting materials, money and ship upgrades. Shields, armour, weapons, engines and scanners can all be upgraded with parts found or purchased throughout the system. Levelling up your ship through Exp gains will also give a boost to damage, speed and health, along with upgrade points that can be put into upgrading certainly special gadgets. These gadgets are the “special abilities” of this adventure and come in the form of armour boosts, EMP bombs, stun attacks and more. There are quite a few options to fiddle with here and I only expect these options to grow as the game progresses through early access towards version 1.0.

The other I want to mention is travelling between locations. This is achieved in a similar way to No Man Sky’s planet-hopping. There are some differences, however. Travelling to a location can be done with an autopilot system, but doing so means you may miss some interesting, unexplored regions that hold goodies and upgrades. So it is worthwhile to sometimes go the slower manual route to your destination. It is a great system that portrays the vastness of space while at the same time making that expanse manageable and not daunting.

After my initial time with Everspace 2, I am only more excited to dive into this game and watch its progression towards release. The game hints at further customisation options, different tasks types and a host of other upgrades still to be implemented so I have no doubt in my mind that this is heading towards becoming a high-quality space RPG that will please fans of the genre immensely. My only slight concern is will the gameplay hold up over a long playtime of 20+ hours. Only time will tell on that one but as it is, even in Early Access, Everspace 2 is very easy to recommend. Keep an eye on this one folks, it is destined to be something special.

You can see Everspace 2 in action thanks to an episode of Player 2 Plays.