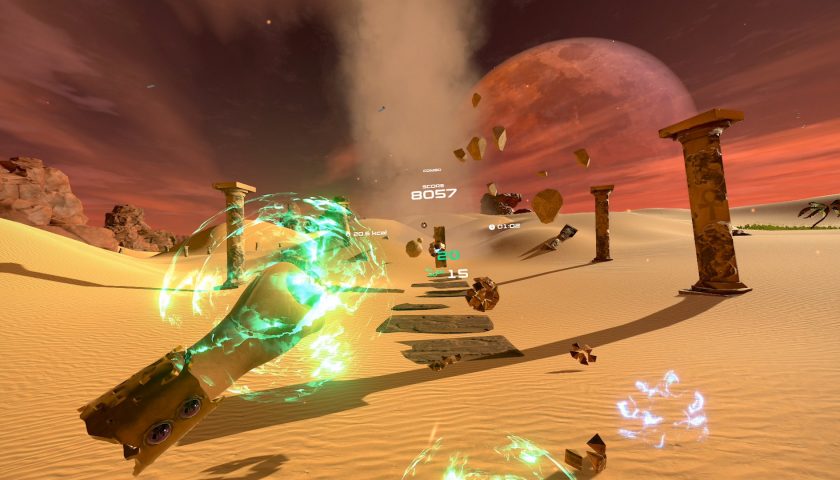 VR vs Fitness and Fat: Round 2 – 7 days of Experimentation

One week down and a lot of sweat mopped up. As you can see from the stats above I have managed to lose weight and cms which is something that makes me smile. This was made even better by the fact it was my wife’s 40th during the week and I participated in the usual sort of revelry associated with such a milestone. There were dinners, cakes and of course beverages, all of which are the enemy of someone trying to lose weight. So the fact that I still managed to lose, despite all the temptations of the week, says I am on the right path.

This week, I spent a lot of my workout time sussing out which apps were going to work best for me. There is quite a number to go through on the Oculus system so sorting out which suited and which were gimmicks took quite a bit of time. I settled on a routine last week which consisted of 20 mins of a dedicated fitness app like FitXR, Powerbeats VR or OhShape and finished my workout with 10 mins of a fun, yet high energy title like Pistowhip, Beat Saber, Synth Riders or the surprisingly excellent roguelike Until You Fall. On Sunday, feeling a little sore for my weak of work (and the after-effects of a 40th birthday party) I decided to do an hour of just fun titles, which kept me moving but didn’t put my body through the full stress of a dedicated workout app

Speaking of the apps so far there are some clear leaders in the fitness category. FitXR, the sequel to BoxVR is easily the most comprehensive of the titles I have used. It has great calorie tracking, easy to use workout searches and great motivation systems like leaderboards and personal tracking. The development team have taken quite a few steps forward since BoxVR and it is a better product in just about every way. The addition of dancing routines is also welcome and are a great option when your arms just can’t throw one more punch.

Powerbeats is another “boxing” style app that is competent, but just not as comprehensive as FitXR. It has a large selection of workouts and the option to generate workouts on your own music is nice, but it just doesn’t have the polish of BoxVR. That being said, it is still a great way to get the sweat going and I feel like it may be a bit of a work in progress from the developers. Finally, OhShape is an odd one, with a focus more on flexibility and strength than cardio exercise. It requires my body to fit in the shapes on the screen as they rush towards me. Think that terrible old game show “Hole in the Wall”  but much faster and without the annoying presenter. It feels like the sort of app to use in a recovery session or when you need to give your body a rest but don’t want to skip a workout.

These are of course just my early thoughts on things. One week isn’t exactly a lot of time to make final judgements. Stay with me as I jump into my second week, which hopefully should see better weight loss as I can also work on my diet a bit more seriously. In the meantime don’t forget to enter our Zero Latency VR competition where you could win a double pass to Zero Latency’s newest location in Sydney.