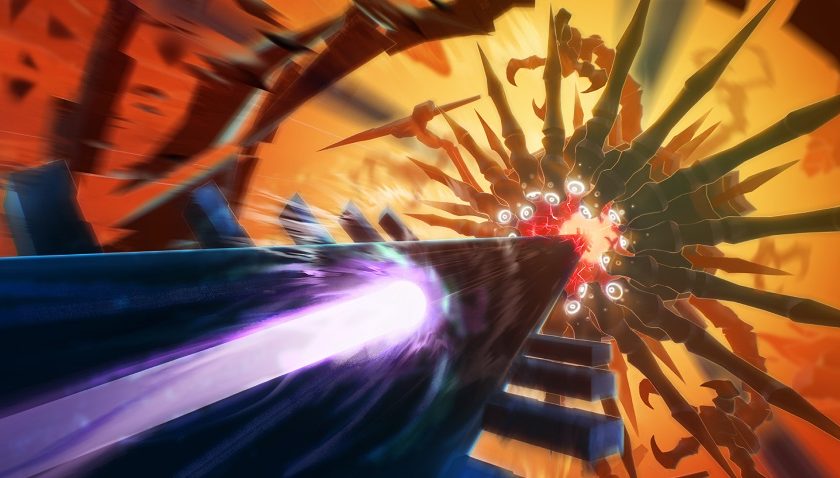 On being given Nerve to check out, my first impressions were piqued by its concept: racing on the outside of a tube-like structure reminded me of elements of Llamasoft’s POLYBIUS, except with less blasting. Your goal is to race through the game’s 100 Waves as quickly as possible, earning a higher rank the better you do. Waves are grouped up into Zones of 10, meaning there’s 10 Zones all up which you’ll need to master.

Earning an S-Rank requires the use of both your Booster to rocket at breakneck speeds, along with your Brakes, letting you slow to a crawl when needing to negotiate those tight sections. That’s just the basics though. As you’ll also unlock other abilities – the Blast can shatter special walls, and the Vault lets you leap over short ones. Both are introduced at a pace which doesn’t totally overwhelm the player, and mix up the core concepts to be more than about steering and speed control.

The walls you need to vault over introduce what I feel is a bit of a shortcoming around visibility though. You’ll find some of them hide additional hazards, which you glide over by holding the Vault button down. That’s not a bad idea in itself, but learning which does and doesn’t is usually done by dying.

Death isn’t the end, however. When crashing into an obstacle, you’ll restart the current Wave in a flash. Which is great for getting back into it, but sometimes, you do just want that moment to collect yourself before taking another run. Which leads me to my one big dislike with Nerve: its pacing.

Each Wave is brief, needing an intense focus to complete it as fast as possible. I’ve no problem with that aspect, it is a game about speed after all. It’s just Nerve doesn’t offer any moments of respite. It’s one thing to focus intensely during an individual Wave, but maintaining it for an entire Zone, especially when you’re likely to replay individual Waves, might be enough to wear a player down. Great pacing is the balance between a player experiencing moments of intense action, and slower moments where they can relax before things ramp up again.

When the final Wave has been cleared, you’ll face the Zone’s Gatekeeper. These battles are based around the mechanics and hazards of each Zone, where you’ll alternate between needing to avoid obstacles and having a chance to strike their weak spots. It’s not much, but it goes a small way to showing how good pacing benefits the player, as avoiding obstacles gives you that frantic challenge before things slow down and become tense waiting for the right moment to strike.

From Zone to Zone, there are many new challenges you’ll face, and whilst there is some challenge, it’s more than reasonable. But getting onto Zone 4, and that’s where it got to the ridiculous point for me. You gain Focus, the final ability which is used to slow down time, whilst speeding up your side-to-side movement. There’s also a new enemy, the Seeker, and you’ll need to master using Focus to avoid its attacks. It might be tricky at first, but with time, you can determine a strategy to recognise when it’s about to strike and get out of the way.

Which worked wonders for me until reaching Wave 6.

As not only are you challenged by Seeker after Seeker, you’ll find these challenges take place in a corridors which offer no room for side to side movement. But in fact, there is a way to avoid the Seeker’s, slowing down and moving through gaps in between the sections making up the walls. I won’t lie: these gaps weren’t apparent on the first play, and even knowing they’re there? It requires pixel-perfect timing to get through.

Leaving me feeling incredibly frustrated by the process. I’ll admit, I’m one of those types who prefer hazards to be recognisable on the first attempt, rather than learning by dying. The designs of games like Rick Dangerous were player hostile in 1989, and they’re even more so in 2021. It’s not helped by the game expecting perfection from the get-go. When it comes to great design, a game should introduce a challenge in a way which is easy to beat, then make it tougher. The way these wall sections are handled this isn’t the case at all.

Which is a shame for me – the core concept around Nerve is interesting, and from a technical angle, the game is incredibly well put together. The controls are responsive (at least with an Xbox One controller) and can be remapped as necessary. The overall aesthetic stylings of the game are great. From various obstacles shifting and warping into place as you approach to put you off, to the overall fluidity of movement, the style cannot be discounted.

Nerve takes a simple concept in the tube racer and manages to build upon it in many distinctive ways. The core structure makes it incredibly easy to dive in, have a quick session and move on. Which can be quite handy in the event you do become frustrated with some of the level progression. As someone who relishes games where achieving that flow state is possible, the lack of natural gaps in the action means that prolonged play has the potential to be draining, even for those fans of intense, high-skill experiences.

Nerve was reviewed on PC with code kindly supplied by the publisher.