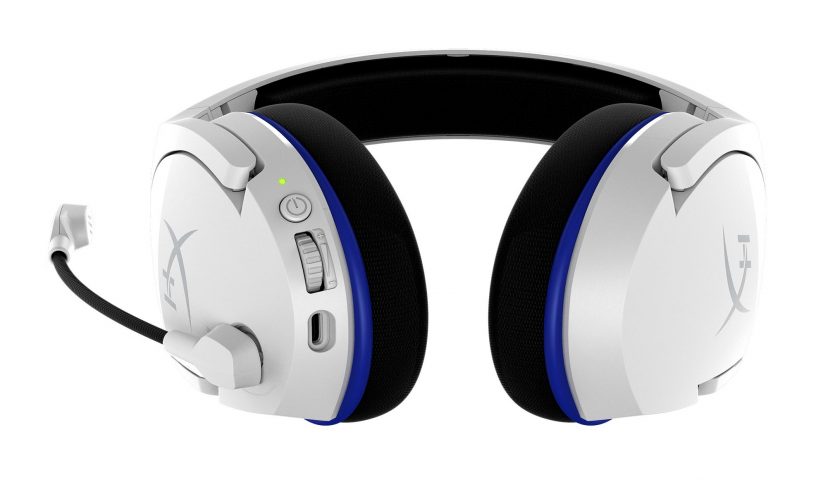 In the now reasonably crowded market of headsets, there’s a lot to be said for something that just does what it needs to do and nothing more. If you’re a person who places a high value on crisp, top-quality audio, there’s no doubt that you’ll be able to procure yourself a set of cans that will allow you to live your high-fidelity dreams. But as well as coming at a steep price, these kits can also come with a bunch of unnecessary bells and whistles that make your listening experience more complex than it needs to be. For those of us that just want good sound in a simple package that won’t absolutely break the bank, there are thankfully things like the HyperX Cloud Stinger Core Wireless headphones to do the job. Remembering the slightly lengthy name might be difficult, but using these headphones – whether with your PC or PS4/PS5 consoles – is exactly the opposite.

Though they’re compatible with both the previous and new generations of PlayStation consoles, the sleek white design with blue and black accents is clearly made to match the PS5. The white makes the set a little more striking than its often-black competitors, and I quite like that it makes them stand out. Despite the bright appearance, the headset has a minimal amount of physical bells and whistles. All the controls are on the left side – the power button and LED power indicator light, the volume control, the USB-C charging port, and the microphone. There’s no control to manage microphone volume, but in this price bracket, these headphones have ‘core’ in the name for a reason – if a feature is unlikely to be crucial to someone looking in this price bracket, it isn’t there.

A lower price point means cheaper materials, but in a lot of ways, this seems to work in the headset’s favour. The use of durable plastic rather than metal means these headphones are incredibly light, and I had no trouble using them for hours at a time without feeling any kind of discomfort. The padding on the cups, though fabric instead of a more high-quality leather, is still soft, and fit comfortably over my (admittedly quite small) ears. Given the pleather on my last set of headphones started flaking off and leaving bits all over me and my desk, this fabric is actually a welcome change, and I can see it lasting well. Though not entirely noise-cancelling, the fabric cups do a good job of blocking out the background noise without entirely cutting me off from the world around me, instead turning it into a distant hum.

The microphone, while not as good as some of the higher-end sets and probably not suitable for recording the next big hit, will easily get you through online gaming sessions or conference calls with colleagues. It successfully blocked most background noise like my housemates banging stuff around in the next room, the tap running, or the sound of my neighbour crying that comes in through my office window (to be clear, a child lives there, but I wouldn’t judge them anyway), so will nicely fit the needs of most. If you’re looking to do more serious recording, chances are you’ll have a microphone anyway. There’s also a neat swivel-to-mute function on the microphone that allows you to easily mute yourself when it isn’t your turn to speak without worrying about clicking in and out of windows or fiddling with dials. The microphone also has a good range of movement, allowing it to be positioned however works best for you. The same can’t be said for the cups, which don’t turn much at all, but I didn’t find this to be much of an actual problem.

Whether it was playing a game on headphone mode in stereo through the PS4, or listening to an album through my laptop, the audio quality on these headphones was more than decent. Would it be enough to satisfy my audiophile father who spends all his time building custom amplifiers to achieve ~pure sound? No, probably not. But was it good enough for me, a person who just wants things to sound nice and for the surround sound features in games to work like they’re supposed to? Absolutely. Music and sound effects were clean, and while I would have liked to be able to keep the volume a little lower (even at the lowest, I still found myself occasionally turning in-application sounds down), that was my only real complaint. The sister model to this headset, the HyperX Cloud Stinger Core Wireless 7.1, made only for PC, allows for more customisation through the HyperX NGenuity program along with better sound, but I was happy to sacrifice that functionality for compatibility with the PlayStation consoles.

Overall, for their price point, the HyperX Cloud Stinger Core Wireless headset is a plug-and-play venture that does exactly what it needs to do. It connects with a USB drive sized-dongle, turns on, and is ready to go – whether using it through your PC or PlayStation. It has a good range (I can comfortably walk downstairs and through several rooms and still clearly hear music), no fiddly buttons on the headset to distract you, and it blocks out just enough noise to be effective. It promises 17 hours of battery life and easily delivers, without a lengthy charging time. It isn’t the best headset on the market, and it’s missing a lot of features that a lot of people will ask for, but this isn’t for those people. And as one of the cheapest wireless console-compatible headsets on the market at the moment, it’s easy to recommend this to anyone looking for a durable, comfortable headset to do the basics, and do them well.