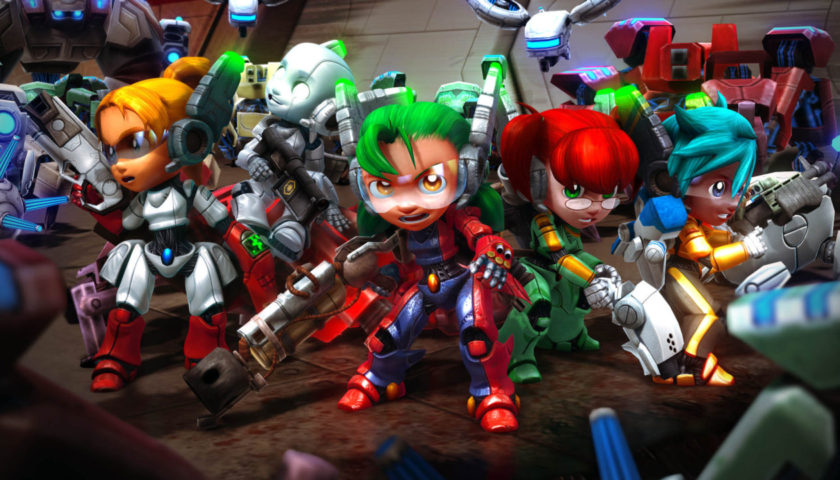 In the realm of twin-stick shooters, there are a few names that stick out in people’s minds. Geometry Wars, Smash TV and Helldivers are just some of the well know entries in the genre. All games that require serious skill and nerves of steel that encourage players to take just one more turn. Assault Android Cactus follows in these footsteps but it may just end up being more memorable than them all.

As I am sure many of you know Assault Android Cactus has been out for quite some time, but with the launch of the Xbox One X, it has now become one of two launch titles for that new system. Not bad for a little game developed in Australia right? Well, I can say it is a well-deserved honor because Assault Android Cactus is one of the best examples of pure arcade gameplay available. The game mixes traditional twin-stick gameplay with fluid levels, multiple characters and a wonderful art design that makes it stand out from the competition.

On the One X, Assault Android Cactus is enhanced with 4K resolution and HDR lighting and it really shows. It looks noticeably better than my PC version. The game also feels more at home on a console, with co-op play sitting in front of a console a much more natural fit than trying to crowd around a computer screen. Co-op is probably the game’s true highlight because it is a significantly challenging game, so having a friend tag along will make things infinitely more manageable, especially when taking on the tough bosses.

The character design is also top notch. Each of the selectable androids has different primary and secondary weapons and are therefore suited to some encounters more than others. I quite often found myself switching up my android selection after dying during a difficult fight, trying to find a weapon that suited the situation better. It is a nice mechanic that forces players to try all of the characters available and not just pick a favourite for the entire game.

I mentioned level design before but it is worth going into more detail. The levels in Assault Android Cactus are both inventive and exciting. The levels change on the fly, with cover disappearing, walkways changing their movement direction and floors falling away without warning. It is done in such a way that no matter how good I got at the game I never felt comfortable, never felt safe. It keeps the tension in the game and ensures that each encounter is more than just a swarm of enemies.

What all this boils down to is the fact that Assault Android Cactus is one of the best, if not the best, examples of classic arcade gameplay you can find on the Xbox One X. Granted there is no real reason to buy this game again if you already have it on another system, but if you are yet to experience the game now is the perfect time. If you have friends that like to game with you on the couch then really it is a must buy. Pure, distilled fun wrapped in a wonderfully colourful wrapper, Assault Android Cactus is, without doubt, a must play title.