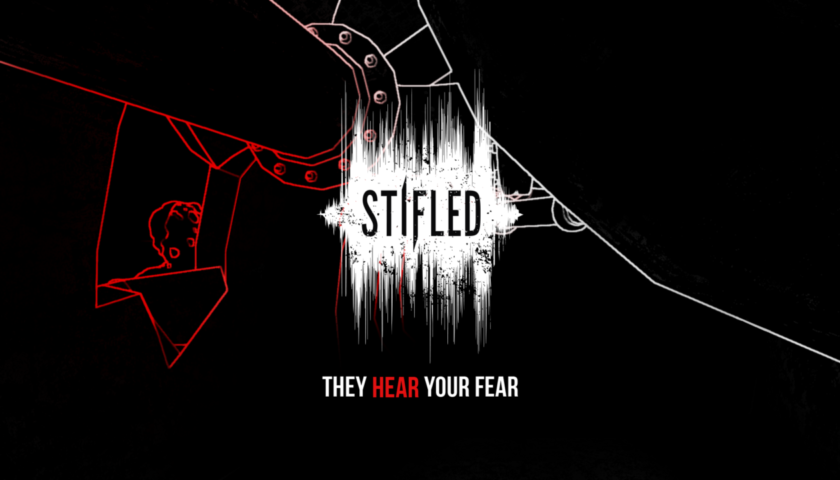 VR seems to be the next great frontier for games development but what is surprising is that a lot of Dev studios are not going for realisim, they aren’t looking at recreating an entire world. Instead, a lot of developers are coming up with some really interesting ways to use the VR technology, ways that I would have never even imagined. One of those developers is Gattai Games, creators of the creepy black and white horror game Stifled and I was lucky enough to sit down for a chat with the co-founder of Gattai, Justin NG Guo Xiong.

For those that don’t know, Stifled uses sound to act as a radar within game. Without sound nothing is visible. The game uses persistent in-game sounds to reveal some of the environment but the real kicker is it also recognizes noise that the player makes. When I questioned how difficult the process was to incorporate the sound recognition Justin said getting the levels and calibration right was the most important part. “Getting the time between the noise being made by the player and the pulse appearing on screen revealing the environment was the most difficult part. Any noise in the game creates a pulse, creating something you can see so mixing that in-game ambient noise with player interactions was a real challenge.”

The ambient noise is also used in more ways than simply creating a visible world, it is also used as a guide for the players. “It creates a bright moment in the darkness that tells the player that perhaps that is where they need to go, like a guide. It adds focus to the game, adds to the core around which it was built.” My next comment to Justin was that the game seemed eminently suitable for the VR platform. Justin was impressed with what they had achieved. “So many titles in the VR space right now are trying to create virtual worlds with hi-fidelity graphics, but by keeping things simple we have really put the focus back on the sound and the natural tension it creates.” When I commented that there really isn’t anything out there like it Justin said “There really isn’t and it is a great benefit for us”

Being on the PAX floor in Australia was a giant buzz for Justin. “It’s been a long production, we spent a long time polishing the game to this point.” I also asked if he got a kick out of watching people play the game, to which Justin replied enthusiastically. “All the time. When we go to events like this and people start screaming we know we have done our jobs. We even take some footage to put on our Facebook page, it is wonderful”

When I asked about the game’s underlying horror Justin was quick to point out that the game wasn’t Horror as such. “The game is very much a thriller, a lot of people find it difficult to differentiate between horror and thriller and while there are some horror elements we definitely try to keep the game firmly in the thriller genre. The pacing and suspense are super important to the experience.”

I was super interested to find out what unexpected challenges the team faced during the development of Stifled. Justin was more than happy to share. “We come from a very traditional programming background. We made standard flat screen 2D games and we were pretty good at it. But when we started Stifled, the addition of VR and then the noise recognition on top of that added so many more points of interaction between the player and the game. Balancing that was super challenging.” He went on to say “It was very important to us that the experience was comfortable, that people didn’t get nauseous in the world of VR and that was a huge challenge for us”

Justin during our interview seemed almost relaxed, calm even and when commented as much he said “I am. I am very happy with the game where it is. As a developer, you always want to do more but there has to be a point where you say stop and I feel like we are at a good point and it is the best we can do as a team.” When I asked about the ambition of the project, especially for a team that consisted of only five people, Justin could only nod “I honestly don’t know how we did it, but we did so I am just going to leave it at that.”

As our chat was winding up I asked Justin what he sees as Stifled’s keen point of difference. Without hesitation he replied “The Audio. In a horror game, people usually play and use sound to comfort themselves. They talk to themselves or even scream and that’s ok. But with Stifled you make those noises and it only heightens the terror inherent in the game. There is a moment when people are playing Stifled when they get that the enemies can hear them and it is a profound moment for the player, their whole body language changes and sound becomes a thing to fear”

In all, my time with Justin revealed a man that was both proud and excited to be showing off his game. There was no doubting his passion and in my mind that passion is shown off in the final product. Stay tuned for my look at Stifled soon but in the meantime, you can check out the trailer below.