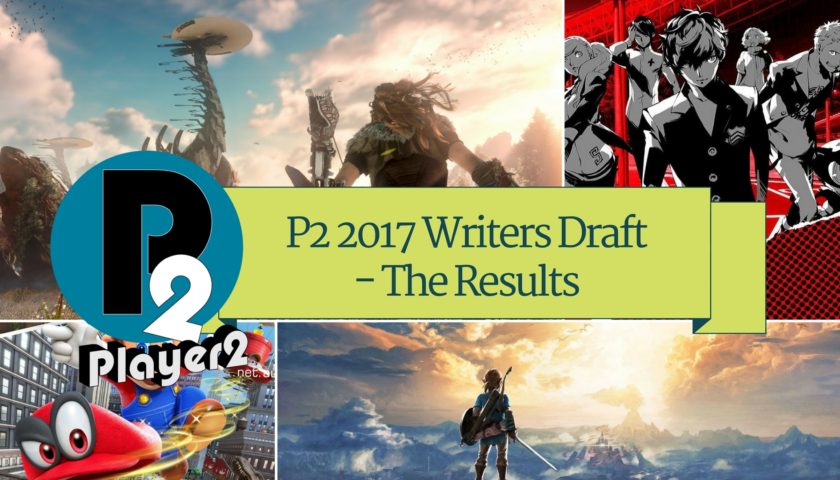 It’s that time of the year once again, the Player2 Video Game Fantasy Draft has come to a close for another year, and the winner has been determined. Before we go through the results, and the verdicts from each of our contestants, take a look here and here to refresh yourself on what each person selected! As we countdown toward our winner, take note of what each participant had to say – now, on with the countdown toward our winner.

“It might be an understatement to refer to my success, or lack thereof, in the 2017 Player 2 Draft as a swing and a miss. It’s much more like swinging, missing, and connecting with the back of my own head instead of the ball. Ouch. To be fair, it felt like a good gamble at the time. I had nothing to lose, and a lot of the good stuff was already taken. I can’t even tell if it would’ve paid off because most of my predictions weren’t even announced, let alone released. Not the ideal way with which to close my account on the Player 2 Draft forever as I wade off into unknown waters next year. But then again, they say it’s not the destination that matters, but the friends you make along the way. Or something…”

“I was fortunate enough to have the first and easily the best pick for 2017 in Zelda Breath of the Wild, but I admit that I approached that with a bit of trepidation (with the last original console release, Skyward Sword, causing quite a rift in the fanbase). Only two of my other draft games were released in 2017 and were happy additions to the resurgence of isometric CRPGs in the game market. Overall, even though Battletech and Shemue 3 didn’t release in 2017, I managed to score the highest average for the Player 2 draft, and I am dancing happy with that achievement. And maybe it is good that some of these games got delayed – 2017 was packed with a ton of awesome titles already.”

“I’m in a strange position in that I only ended up playing one of my picks this year! Mass Effect Andromeda was quite the disappointment (it almost made my most disappointing, but I wanted to be original and it’s an easy target). Gosh, it was so average that I almost forget that I played it. Actually, I will say that when the action was running, it was pretty good, but otherwise, Mass Effect Dragon Age Inquisition was just bloody boring and repetitive.

As for the others, well I don’t own an Xbox One, so Cuphead was only experienced via YouTube – it does look very stylish though and it managed to net me a 90 score, so thanks Mr Head! Lady Layton and Outlast 2 kept me afloat with their okay scores, but it was the lack of a showing from Frozen Synapse 2 that let me down. Just goes to show that even an early draw (I got second pick in the first round) doesn’t necessarily give you that much of an advantage. I’ll have to really think through my strategy for 2018. Bring it on!”

It really is the tale of good not great for my picks this year. I managed to grab a big one with Horizon but Ghost Recon, Marvel vs Capcom and Agents of Mayhem never quite got out of the solid 70’s. My picks were really the “buy them on Steam Sale” selection, weren’t they? The real killer for me though was the cancellation of Scalebound, two days after we made our picks so I was really on the back foot from day one.

“I am absolutely not going to talk about how Ni No Kuni 2 fucked me over in the draft. Absolutely not. Nope. I don’t even care. I am not even one bit salty that the STUPID GODDAMN GAME SCREWED ME SO GOOD GODDAMNIT WHY DID YOU GET DELAYED SO MUCH YOU BETTER BE AMAZING WHEN YOU COME OUT I SWEAR TO GOD.

Alright. Anyway. So, Crash Bandicoot was baller, right? Best game ever. Totally didn’t make me want to punt the entire bandicoot population off a cliff. I’d go play that again right now if I didn’t have a brain inside my skull that tells me my heart can’t handle any more bouts of rage.

Overall, I’m pretty chuffed with how my selections went. I knew The Lost Legacy was going to be fantastic, and Hand of Fate 2 was always promising so they didn’t surprise me. And Crash Bandicoot doing so well just proves that a mix of nostalgia and masochism is the way into a millennial’s heart. Bring on 2018, I can’t wait to wade through the onslaught of delays and ridiculousness that the year promises to bring.”

“This year was my first year being a part of the player2.net.au draft and honestly part of a fantasy draft at all. The concept was very new to me and as I’m the worst in the world at knowing when games came out it, the draft itself was hugely stressful, but I think its supposed to be.

I was fairly happy. With my performance, I felt like For Honour should have scored better, but was let down by poor server performance/matchmaking at launch and just lost its momentum pretty fast. Same goes for DoW3. All in all majority of my games scored mid-80s which I have to say I’m pretty proud of. Good job selected games. All in all, I can’t wait for the 2018 draw and had better start researching what is coming out, because apart from Total War: Warhammer 3 I have no clue what is coming out next year. All I can hope is to do better than my man Swinnie’s performance this year. Tough break mate.”

“2017 was always going to be tougher than 2016 because if for no other reason, there were more participants. This factor alone made the selection of a game that slipped under the radar even tougher this year, and this year, some of the selections I hedged my bets on simply didn’t pay off like I needed them to. Yooka-Laylee didn’t capture hearts as we all hoped it would, GT Sport didn’t live up to the franchise’s illustrious history, Halo Wars 2 didn’t quite hit the mark, while NBA 2K18 was mired with microtransaction related issues and was docked for it. Thank god for Persona 5 which nailed it with a 93! I feel the strategy paid off this year, given I fell only 11 points short of our winner despite the poor year I had – perhaps 2018 can finally be the year that I crack my duck!”

“So close, so very close. Unable to follow up with a consecutive victory in the Player2 Draft, I guess I have to settle with 3rd place for 2017. However, this all could have been avoided had Rockstar not pushed Red Dead Redemption 2 into 2018 – no doubt a wise decision, but not one that benefitted me in this draft. While Prey and Super Mario Odyssey were titles I was looking forward to and played in 2017, both Danganronpa and COD: WWII were picked for their predicted reception which paid off somewhat, both coming in at a respectable 81 on Metacritic. However, had either of them manages to squeeze a few more points and this outcome could have been very different. Congratulations to our winner Stevie for managing to score an almost 87 Metacritic average on her chosen titles – no easy feat! Say it with me, fellow losers – the draft order screwed me.”

“Have you ever had that moment where you’re watching the lottery and you nearly lose your bowels because you think all your numbers showed up? Well, that was me after my Sonic Mania pick knocked it out of the park! Seriously who could have seen that one coming? (This guy … that’s who). My last choice was a slam dunk, the new South Park game, that’s bound to get above 85 right? … Right guys? Alas, it was not meant to be and just like the guy who got silver in the long jump at the Olympics, I fell short. But who could really fault the winner this year? Talk about consistent numbers! I swear Stevie had some inside scoop or something.”

Our Champion for 2017 – Stevie McDonald

“I’d like to take this moment to thank everybody for their support this draft; I couldn’t have done it without you! And by “you”, I really mean Stephen, for picking RDR2 so that I couldn’t. Thanks to you picking the only game I had in mind when draft picks started, I managed to avoid any non-scoring titles in my choices. So, cheers mate!

Aside from that little stroke of luck, my original method for picks paid off reasonably well. None of my titles went gangbusters the way games like Breath of the Wild did (*shakes fist in Sarah’s direction*), but they all released to very receptive audiences. The indies more than held their own against the higher-budget titles and, of those, Nier: Automata earned itself a few GOTY nominations in various corners of the internet; results which make me feel weirdly proud, given I had absolutely nothing to do with any of them.

Far beyond the “solidly average” result I hoped for at the beginning of the year, I have come away the victor! I may have only squeaked said victory in by a few points (nyah nyah Adam!) but I… wait, I just did the math, and I think I’ve been robbed a point! WHO’S RUNNING THIS TWO-BIT OPERATION ANYHOW?”

*Note from Editorial* Stevie was right, we did rob her of a point unknowingly, however she was winning by that damn much anyway that we’re still going to deprive her of it anyway! Hahahahaaaa *End Evil Cackle*

So from all of us at Player2 a big congratulations to Stevie on the victory in 2017, and to Sarah Ellen, who despite her 9th placed finish, took top gong as the player with the highest average score this year, the result could have been very different had one of those two games released in 2017. As always though, the games industry continues to throw up curveballs and we all have to adapt accordingly. Look forward to an all-new Player2 Writers Draft in 2018, we look forward to you joining us again in the new year.