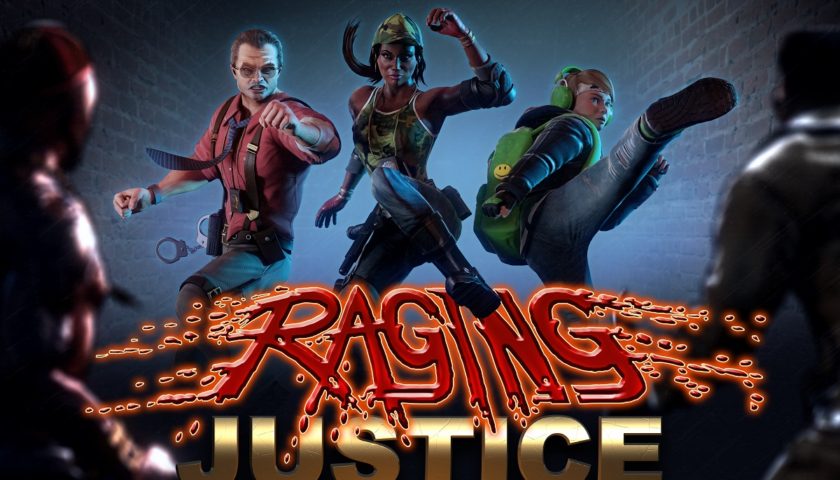 Raging Justice is a new 2D side-scrolling beat-em-up developed by MakinGames, where you take control of one of three different characters in an effort to save the Mayor of Big Smoke City, by punching, kicking and generally causing mayhem for anyone that stands in your way.  It won’t be easy but it’s up to you to do the job.  You are the only one who can take on the gangs and save the city unless you have a friend on hand to join in.

Inevitably when games like this come out it is easy to compare them to the Final Fight and Streets of Rage series of old.  While there is a lot of similarity between these types of games in the genre, Raging Justice expands on the old tried and true “beat up everything in your path” to give the game some added challenge. At the end of the day, if you go in expecting a grand narrative arc, with fleshed out characters and motivations you will be disappointed.  If you go in looking to waste some time beating the crap out of thugs, then Raging Justice will leave you satisfied.

Raging Justice tries to improve on the standard formula by giving you the ability to arrest thugs. After you have given them a beat down you may get a small time frame in which you can slap some cuffs on the thug.  This provides you with a health pick-up that can make your progress through the game that much easier.  On top of this, there are challenges for you to complete in every level.  Some of them are as simple as reach a certain score or beat the level in a certain time, the standard a person would expect.  Some of them though are a little bit on the strange side, such as the challenge to knock out a pigeon.

One of the more innovative challenges is the Good Cop and Bad Cop challenge.  Every level will have a set number of warrants for thugs, and the game helpfully places a red outline on these characters so you can spot them easily.   If you arrest them you will get a Good Cop bonus and some health restored.  If you take them out violently, that is with a weapon, you will gain more points but an increased Bad Cop rating.  Your Good Cop/Bad Cop rating will have an effect on the ending of the game, but the path you choose to follow is up to you.

Obviously being a Good Cop and arresting bad guys is the more difficult path.  It is easy to get caught up in attacking, especially when you are attacking multiple enemies at a time, and knock a warrant target out by accident.  But a lot of the difficulty comes about from the mechanics built into the game itself.    Once they are in this stunned state you will only have a small time frame in which to get the handcuffs on them.  There is almost always more enemies on screen, so trying to make the arrest in that time frame while dodging their attacks can be the real challenge.

The big problem with being a Good Cop comes down to poor design.  The button used to arrest enemies is the same one you use to grapple and pick up weapons.  This leads to many situations where you are trying to arrest a stunned thug and you will find yourself either grappling other enemies or picking up weapons and it can be really frustrating.  A simple fix for this issue would have been to set the arrest actions to its own button.  There was no way to change the control scheme in the options even though the left bumper on my Xbox controller was not being used for anything.  It would have been a small change but one that would allow the player to make the arrest, while still facing the challenge of avoiding the remaining enemies on-screen.

One of the things that really struck me while playing Raging Justice was the difficulty of the game.  It was very reminiscent of the old arcade machines that were designed to be hard so you would keep pumping more money in them to keep playing.  Even on the normal difficulty, I found multiple occasions where I was just overwhelmed by the number of enemies on screen.  As soon as I would get back up I found myself knocked down again.  It is a frustrating situation and had me ready to throw my controller multiple times.  The one saving grace is that when you respawn, every enemy is knocked to the ground, giving you a chance to get back on the offensive.  I have no idea how I would be able to beat the game on the Tough Guy difficulty, and shamefully I must admit I resorted to the Wimp level for this review just so I could reach the end of the game.

If some side scrolling beat-em-up action is what you are craving, then Raging Justice will provide you with what you need.  It is a good looking and fun way to pass the time and take out some aggression, and if you are finding the difficulty a bit too much for yourself, you can always bring in a friend to help you pound some thugs.