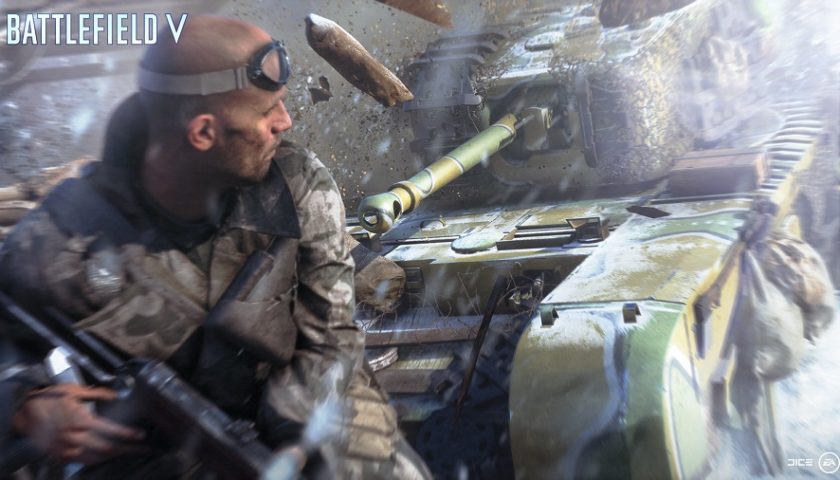 The beta for the latest instalment of the Battlefield franchise has come and gone, and for those of us that were not privy to the Closed Alpha or preview events, it was a good chance to see just how Battlefield V plays.  As always Conquest, the 64 player meat and potatoes of the Battlefield series was available to play, as well as one of the new Grand Operations

During the beta, we got to have a good look at two vastly different maps.  An urban battleground situated just down the road from The Hague in the Netherlands, Rotterdam pits opposing forces through a cityscape that has already seen heavy fighting, with partially destroyed buildings and rubble scattered around the map.  Where it tweaks the standard game of Conquest a bit is in the verticality that comes into play.  Objectives ‘A’ and ‘E’ are both split level objectives, able to be captured from either the top or bottom levels.  While we have seen verticality utilised before in the Battlefield 4 map ‘Siege of Shanghai’, these objectives are static and not subject to a Levolution that affects where players go to capture the objective.

The second playable map took us to Narvik, an icy coastal town in Norway that was contested during WWII because of its iron ore shipping capacity.  A much more open map than Rotterdam, Narvik is one of those maps that seems like everyone is deciding to play as a sniper.  While there is a lot of open spaces and some good vantage points for snipers, there is also cover to be found around most of the objectives that can result in some excellent close quarters fighting.

On display, we also had our first look at one of the new Grand Operations.  For those that haven’t heard, the Grand Operations will be game modes that take place over multiple days (rounds) where the results of the previous day will affect the amount of respawns and how much ammo each team has.  At the conclusion of two days if the score is tied the payers will enter a Final Stand, where it is an out and out fight to the death with no respawns.

But what I really wanted to know going into the beta was would I have fun.  Having been a fan of the series for a while now I was worried about my enjoyment level with the game.  Having jumped in with a long time member of my Battlefield squad my initial moments weren’t exactly top notch.  As much as we tried we just could not make any headway against our enemy and while there were medics around, reviving fallen team-mates was something they were not really interested in.  Battlefield has always been a game that needs and rewards teamwork.  Despite our best efforts the two of us just felt like we were not able to do anything.  Then we were joined by two crazy New Zealanders.  Suddenly we were an effective force, with two assault class, a medic, and a support class, we were taking objectives all over the map.  For the next four rounds, our squad was at the top of the scoreboards every round.  Teamwork is the key to playing Battlefield, and when you are part of an effective squad the game becomes that much more enjoyable.

One area where DICE has made co-operation more rewarding is the introduction of a new buddy revive mechanic.  This allows players to revive anyone else on their squad, regardless of which class they are playing as.  As long as one player in the squad remains standing they can revive their fellow squad mates to continue the fight.  While the animation for this buddy revive is longer than that of a medic using the revive syringe if the dead guy just happens to be your medic it at least gives you a chance to bring him back into the fight rather than waiting for him to re-spawn.  I would not recommend relying on the buddy revive over having a medic class in your squad, as trying to revive a downed player while under fire exposes you to your own death a lot more than the quick revive a medic will provide, but with the number of times I saw medic run past my character as I bled out I am thankful it has been included in the game.  The inclusion of this mechanic could be the difference between survival and a complete squad wipe.  The Battlefield series has always been about teamwork and this system helps to expand upon, and foster that ethos among fellow players.

Which brings us to another benefit of playing the game as a squad and working together.  There have always been bonus points for acting in concert with your squad, and by extension following the orders of your squad leader, but prior to Battlefield V it only made an impact to your score, not to the overall game.  Battlefield V has introduced a new squad score that builds up as you play and complete objectives as a squad.  This squad score can then be used by the squad leader to call in a supply drop, a tank to take control of or, and I think this one was every bodies favourite, a V1 rocket to be dropped on a designated location.  There is nothing quite like hearing the ‘thump thump thump’ as the rocket soars through the air and delivers a gloriously deadly explosion that can make the difference around a hotly contested objective.  The rocket is deadly, but it is also expensive, which means for players to unlock it they have to play as a squad and rack up those points.  This is not COD, where a person can go on a 50 man kill streak and nuke the entire map for even more kills.  Playing the objective and working co-operatively is what allows access to this, just hope your squad leader knows what he is doing when he calls one in, it is such a shame to see an explosion that big wasted.

We have also seen the introduction of fortifications to the Battlefield series, allowing players to ‘build’ different fortifications depending on where they are on the map.  While yes some may say that this is just taking what has appeared in Fortnite and re-purposing the mechanic, it is nowhere near the same.  There are no stairways to heaven in this game, and construction of these fortifications is limited to set areas, but any player can make use of these, allowing for the opportunity to help defend an objective against enemy attack and give you just that greater chance of survival.  It also takes time to build these fortifications, so deciding if you have the time to be able to build before an attack and how exposed you will be while building a fortification is something all players will have to consider.  As with everything else, teamwork will be the key.

I have some doubts as to how the Grand Operations will work overall if people are just quitting after losing the first round but that is something that could be an issue once the game gets a full release.  While there is always the problems associated with being on a team that is getting absolutely thrashed, if the team balancing is on point then the chances of that happening decrease exponentially.  Should there be an exodus at the end of the round I am hopeful that DICE will have programming in place to ensure the teams are balanced.  As much as it sucks to be thrashed it also sucks to be in a match where it feels like the other team has just given up.

Overall I ended up enjoying my time with the Battlefield V Beta and, lack of teamwork notwithstanding, I think it is on track to be another great entry into the franchise.  There were a few issues that I found while playing, such as a bug that left me lingering somewhere between death and life after being killed while in the process of being revived, and of course, there is always the funny ragdoll glitches but overall it was a smooth playing experience.  The guns have the right amount of kick and feel, which is what you would expect from the Battlefield series, and it is always awesome to watch parts of a building get blown away by tanks and explosives.  Unless DICE decide they need more feedback and run another open beta we won’t get a chance to see Battlefield V again until November 20, but once it is out I’ll be back online and, if I’m lucky, find another two crazy New Zealanders to help my squad dominate all who stand before us.