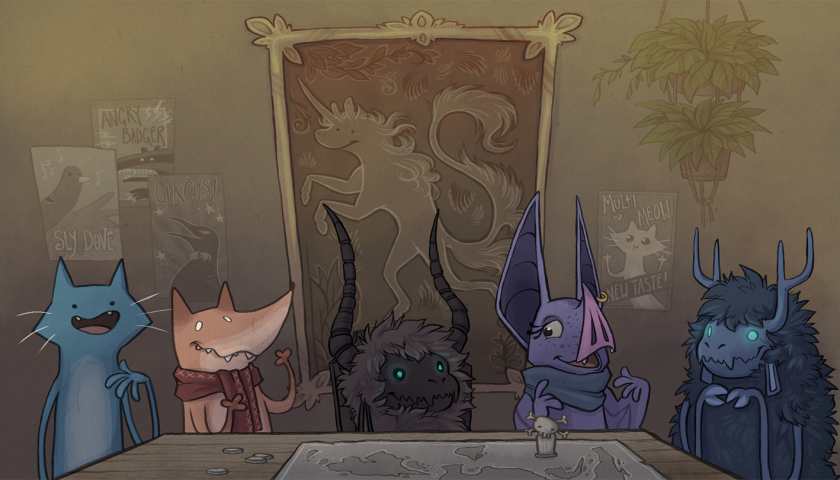 The point & click genre has been criminally under-represented in the last few years with only Double Fine titles like Broken Age elevating enough to bring attention to the genre. The thing that many people have failed to discover is the growing swell of much smaller, independently developed games that have been trickling into the Steam, PSN, Xbox and Nintendo eShop marketplaces. The latest such title to launch, this time only for PC, is Chook & Sosig: Walk the Plank, the latest in a series of titles previously only available via itch.io but now stepping up to the big leagues with Chook & Sosig: Walk The Plank arriving on Steam.

Starring the ghost chicken, and blue, noodle-armed cat Chook and Sosig (respectively), Walk the Plank is an endearing tale of a group of friends role-playing in a tabletop Pirate themed RPG. Exley, a strange, undead severed goat head of sorts serves as the groups Game Master, whilst other friends Cow, Min, and Hebble all join in the fun as well. Each member of the cast possesses a wonderfully diverse sense of humour, each bringing their own flair to the experience as you journey out around approximately a dozen neighbouring islands in the pursuit of lost treasure. Being a tabletop game with an amusing Game Master, nothing will ever quite be as it seems, and new, fairly crazy twists and turns will reveal themselves throughout the entirety of the games’ three-to-four hour duration.

Though the journey primarily (and the entire gameplay component) takes place on the pirate islands, the action will on occasion cut back to the group at the table for some quick banter after key exchanges in the game they’re playing. 95% of the experience is the playable, island-set adventure, and it plays out according to well-worn practices of not only the Chook & Sosig franchise but also the point & click adventure genre as well. Navigation only requires a click of the mouse, while if you’re in need of a hint, you can mash the space-bar to see what items/entities in the vicinity can be interacted with, those are Chook’s magical powers coming to the fore there. In the event that you have hit an obstacle and are unsure how to proceed, a quick trip back to the starting island followed by a chat with Chook will be enough to point Sosig in the right direction. All credit must be given to Sarah Asquith, the sole developer responsible for the Chook & Sosig IP for the creativity on show here in the development of the puzzles you have to overcome, yet at the same time ensuring that the solutions are logical and right in front of you if you know where to look. I never once felt flummoxed by a scenario, and yet was still left scratching my head for a maximum of 5 minutes by the most devious of little tricks. It’s not enough to turn the player off, but still guarantees a feeling of satisfaction when you find the solution to your problem.

The environments are beautifully rendered and though they’re not large, you’ll have reasons to return to each location a multitude of times allowing you to explore the many different facets of each. The animation of each character and the environment itself has been wonderfully done, with even some of the most awkward of actions, such as Sosig’s gangly walking animation or the act of Goblins hopping around a scalding hot cauldron being brought to life phenomenally. Additionally, the implementation of sound, from the grunts and snorts of the characters to the soundtrack has also been well considered, with the pacing of the music perfectly matching the mood of the setting you’re in.

There’s one frustration that plagues the experience significantly. As you bounce from island to island, jumping on and off your boat, there will be load screens, and unfortunately, these are both long and frequent stifling any momentum you’ll begin to build. On rare occasions, you’ll see the framerate jitter, never to any monumental proportion, but they are noticeable enough to be bothersome. These technical hiccups only serve to be minor slights on an otherwise excellent all-around experience.

This is the first marquee Chook & Sosig release, and it does not disappoint. A combination of style, a sense of humour and smart design ensure that every scene is as engaging as the one that preceded it. The point and click genre has been well and truly underserved in recent years, but in spite of a few technical hiccups, Chook & Sosig: Walk The Plank is a title deserving of your time and attention.