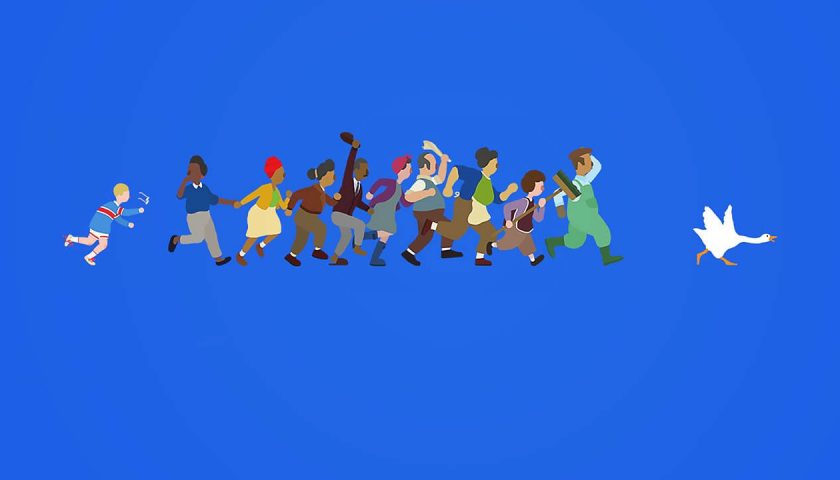 Devolver brings us some of the finest indie titles available and let me tell you Katana Zero sits right at the top of the pile. Instant pick up and play gratification mixed with a crazy, yet engaging story set in some sort of ’80s imagined cyberpunk future. It has all the addictiveness of Super Meat Boy but with more depth in the gameplay department, making completing each level a satisfying experience and one that few games can offer. It fell foul of Aussie censors on release because of its use of drugs in its story, but that has been since sorted out so fear not, you can (and should) add this to your Steam or Switch libraries ASAP.

Something is relaxing and cathartic about pissing people off while controlling a kleptomaniac goose. While not overly complex, Untitled Goose Game challenges the player to think outside the box to complete their goal. It is the perfect game for short sessions while commuting or for keeping the kids occupied when you need some peace.

Honestly, I could make a compelling argument for this to be the Biggest Surprise as well, but I thought the love could be shared around a bit there. Yooka-Laylee was a pretty ordinary attempt, and I’d wondered if the original talent behind Donkey Kong Country, Perfect Dark, Goldeneye and Banjo-Kazooie had lost their touch. It turns out it just took them some time to find their groove because Yooka-Laylee & The Impossible Lair is nothing short of a masterclass in 2D platforming. It’s endearing, hard as balls and one of the great games of 2019..

Like the rest of the world, this title popped up on my radar for being weird and out there. Now, even though you play as a jerk goose, I think we can all admit, the Goose is loveable and adorable. Mechanically this title wasn’t anything special, the visuals didn’t blow me away, the puzzles were fun but not terribly challenging and didn’t keep me up all night. But the combination of the entire game somehow ended up being a unique experience that was (most importantly) fun! It’s not often the Aussie Indie scene gets shot into international stardom but Untitled: Goose game did, and after playing it, it was easy to see why it did and why it was well deserved.

I look back on the year and I don’t think I played anywhere near as many indies as I’d normally like to. When I look back at though, there were dozens of fantastic games. Outer Wilds was an amazing brain breaking experience of exploration and no hand-holding. Wrestledunk Sports and Heave Ho were some of the most fun party games I’ve ever played. I’ve also still yet to play Disco Elysium which I think will really scratch my RPG itch. When I really think though there’s one that surprised me and just jived for me more than the others.

Manifold Garden. Holy shit what a game. It’s an Escher inspired puzzle game where gravity changes to your whim as you work your way through beautiful stark environments and feel your brain click as it understands the extent of your power. It’s one of the first puzzle games in a long time that gave me that ‘now you’re thinking with portals’ feeling and it looked beautiful doing it. It was in development for 7 or so years and I actually kinda buy that based on how good it feels to solve the puzzles and work your way through the ever-changing yet ever repeating landscapes. It’s available on Apple Arcade or the Epic store and I highly recommend anyone who even slightly thinks it could be their jam give it a look.

Despite owning a PSX, PS2, PSP and a PS Classic, I have never played the highly regarded Castlevania: Symphony of the Night. What I have played however are countless titles inspired by it, and couldn’t pass up the opportunity to experience a new take on the ‘Metroidvania’ genre by Koji Igarashi, the creator of Symphony of the Night. While nowhere near as polished as something like Ori and the Blind Forest or Hollow Knight, Bloodstained has been a great title I’ve enjoyed going back to in regular short bursts for the past six months and will continue to do so until I hit the credits. While many have bemoaned the quality of the Switch port as compared to other platforms, I can’t say I’ve had any issues with it personally apart from some slowdown and load times which haven’t impacted my play greatly. In a world of ever-increasing AAA budgets and GaaS time sinks, it’s nice to play something that takes me back to the ‘simpler times’ of my younger gaming days.

Hot damn, Afterparty is a hell of a good time! Puns aside, Night School Studio have truly crafted one of the most memorable and enjoyable games I’ve played this year. Starring Milo and Lola, Afterparty sees the player attempt to escape hell and earn their lives back through hilarious situations and a number of drinking games.

Surviving hell is hard enough as it is, but the pair are also assigned their own personal demon who ridicules and attempts to sabotage them every step of the way. I haven’t laughed this hard since I first discovered the Monkey Island games. I hope Night School keep up this style of game for some time to come! An almost perfect game.

It’s no secret that I enjoy being an arsehole. Well, now I get to live out my dreams as a social pariah, with this charming game putting you in the waddling body of a goose with the sole purpose of screwing with humans. Each small sandbox offers an attached list of quests that encourages Hitman-style exploration of trial and error gameplay. You might need to tick off getting the boy into the phone box – how you discover doing that is where the fun comes in. I’ll admit, sometimes the game’s logic doesn’t seem apparent, and it is possible to wallow in frustrating loops with AI, but for the most part, the game never outstays its welcome and it never fails to put a smile on my face.