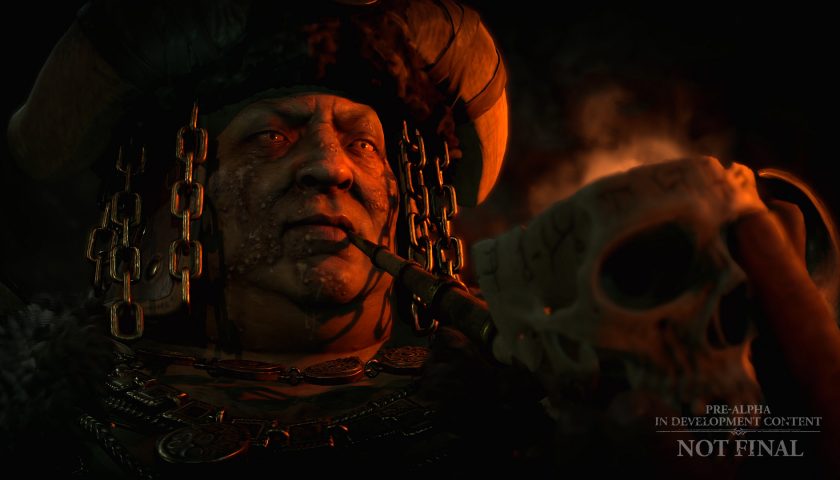 An Update on Diablo IV

The Diablo IV team have provided us with their quarterly update, giving a curious peak into their design process and one of the key areas in the upcoming chapter of the Diablo series.

Where the previous update gave us a look at the Cannibals (a new monster family in development), this update focused on the Dry Steppes to the north of Kehjistan, which is a key area where the Cannibals reside. The Dry Steppes appears like a desert region with a hue shift that lends itself to the idea of dry salt flats, and ruins that compliment a wasteland that has been ravaged by war when Sanctuary was destroyed by Malthael.

There are significant changes to Diablo 3 that are being flagged in this update – in particular, a deconstruction of linearity through story and map. Focusing on the openness of the map, mounts have been introduced to keep the map traversable and relevant and there has been a lot of focus on how to make the mounts relevant (with the mount customisations signalling the progression of the player). Storytelling has its typical cinematics and story beats, but a change in the story beat dialogue screens also makes the experience feel more assimilated. Most importantly, the team are endeavouring to make story and side quests more reflective of an open-world setting – players can go explore, craft or do a side quest at any time.

The other main update has been around multiplayer, and this is where Blizzard is taking a bit of inspiration from Activision’s former acquisition Destiny 2. The team are trying to make the dungeons and key story moments private (just player and party), with the towns turning into more social hubs once the story quests are completed. However similar to some MMORPGs in the market, solo players can assist with a quest and claim reward without having to join a party.

While they are not at an alpha or beta stage yet, the team are focusing on implementing their design philosophies and tweaking with feedback. A comment that struck me is “A friend of mine used to say that Diablo is the game that you keep playing inside your head and Diablo IV is no different.” It is definitely an interesting philosophy and would be great to see how this feeds into the post-story game for players. I for one will be excited to play a game that challenges me to think more about the balance between skill trees and item drops, and the team promise to have some more information about the skill tree system soon!