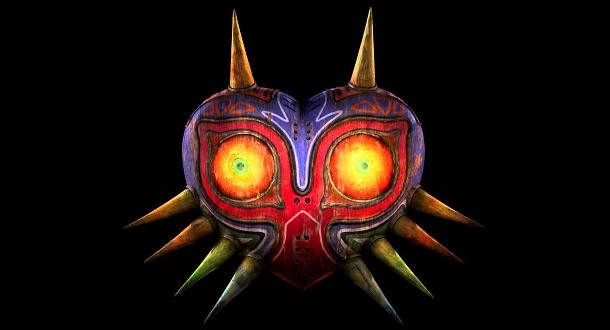 Majora’s Mask is a big deal. For many it is the premium Zelda experience. So here at Player2.net.au we thought that  a grad re-release such as this needed something a little more special than a stock standard review. With this in mind we managed to convince Dylan Burns to walk us through his Majora’s journey in this episodic feature. So kick back, grab your Ocarina and enjoy Dylan’s adventure. You can check out Part one here.

For the sake of convenience, and to keep gameplay flowing, transformations in Majora’s Mask are performed via the magic of whichever mask you choose to wear. Actions are tied to each mask, so that your interaction with the world becomes an expression. Rather than superficial, your transformation is complete in a physical sense, you become the Deku or the Goron or the Zora. People react to you completely as that thing, so that in order to get a normal reaction, you must transform back to your normal self, a form that is both potentially powerful (certainly in a physical sense) and at the mercy of the strict game world.

I think this is why my earlier analogy (see part one) to Dark Souls still holds. Majora’s Mask’s diurnal pulse puts pressure on the player to always be doing something, to be succeeding at a particular focus for that round. The pressure of time forces the player to think about where best to push as well as bringing about a learned familiarity with the clockwork timing of several key character and world events. The more you play, the more involved in these you become and the more impact you have.

Such reflections come from knowing what is to come, but in this playthrough I am nowhere near the influential stage. My last play saw me to the end of the first three-day cycle, where I knocked the Ocarina of Time from Skull Kid’s hand and thus was able to wind things back all the way to the first day. I then visited the mask dealer (boy does that sounds like a character from The Wire), who turned me back into normal Link and endowed me with the Deku mask so that I can transform at will.

I found myself curious as to how the citizens would greet me in my true form. Not much different, as it turns out. Everyone is still very busy with their schedule, on the move, on the job, all oblivious to the horror of the moon falling above their heads. Now that I’m in possession of a diary, I make a point of talking to most people, of visiting areas multiple times just to see if there’s anything different, so that it will get added to my pages for later, for when I have the abilities or items needed to help out.

I think I’ll let the days roll out, perhaps even seek out a dungeon if I have time. Armed with the Ocarina, things don’t feel quite so important any more. I can always reset the clock.

As Link, I can finally leave Clock Town, but when I do so it’s night time and full of pesky overhead crows and ground-springing wolves (that springy sound effect and ominous music is playing now in your head, isn’t it?). I head to the swamp and find more delightfully layered gameplay hoops to jump through. Although everything is clearly designed to elongate my eventual entrance to the dungeon located here, so as to heighten tension as well as reinforce gameplay concepts such as mask-donning, it’s all done playfully, so that I simply can’t feel any frustration. Instead, I feel determined, set with the knowledge that this cyclic world unfurls the more I bury into it. There’s a sense of letting go on a steep Zelda slide as I follow a monkey through the dark forest tunnels to find a hag who’s been hurt by Skull Kid. Back to the potion shop for a restorative tonic, follow the monkey again and then I’m given a free boat ride to the temple, the source of the swamp’s poisoned waters.

It’s here, as I save at the entrance, that I must make a decision: continue to the temple with less than 48 game hours left before the world resets, or use the Ocarina of Time to reset it myself and head back out (using the handy quick travel song I learned) with the full three days available. Memories of running out of time in dungeons push me to the second option, but that requires a dedicated session and I need to get ready for work.

Reluctantly, I close the 3DS lid and promise to return soon.