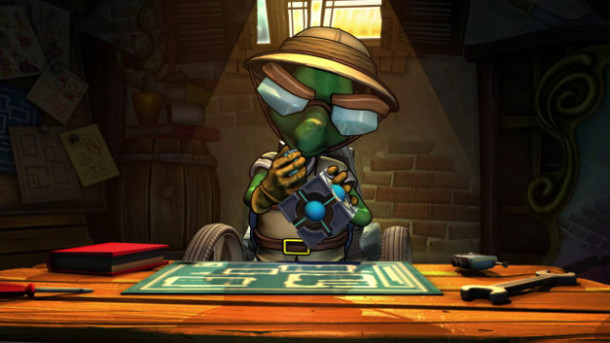 Recently I have been watching Daredevil on Netflix (yes I know I am late to the party, I might even get to Jessica Jones by mid 2017) and it has brought to light an interesting thought pattern. This is a story about a disabled man who has taken his handicap and turned it to an advantage. It took perseverance and training obviously but the one thing that should have made his life harder actually ended up making it better and more meaningful.

The reason I bring this up is I would love to see something like this in the virtual worlds I inhabit. A disabled lead character that is the focus of the story. Can you imagine a paraplegic who manages to convert his wheelchair into a super vehicle that fights crime, an Asperger’s suffering heroine who uses her different thought patterns to solve complex puzzles that no one else can or a multiple limb amputee who has developed different robotic appendages to replace his lost limbs. Sure these scenarios are out there and have no basis in reality but who cares? This is for a video game. If we can play as a mythical elf mage then why can’t we play as a minigun toting wheelchair bound ass kicker?

Having spent a bit of time around wheelchair rugby league (my old man is the Australian coach) I can easily see this group of people filling in the hero role. These are people that haven’t let an accident, be it genetic or otherwise, hold them back in anyway. My dad has told me stories of some of the players crawling up 8 flights of stairs in the London metro just to get to the pub before others in the team (who took the lift) got there. Someone with that sort of determination would make a great lead in a video game and I for one would love to play as that sort of character.

This all comes down to a common argument about variety in games. I have never understood the industry’s obsession with the straight white male. I am a straight white male, I know what that is like to be a straight white male so why would I want to repeat that in a video game every time I play? For me diversity in games is not about pandering to minorities but offering a wider variety of experiences for players. Playing as a 7” African American in NBA2k or as a Hispanic woman in Fallout 4 holds much more appeal to me as it is something new, something different from my everyday life, which is after all quite boring really. That is not to say I don’t enjoy playing Gears of War, Call of Duty or countless other titles that feature straight white male protagonists, because I do, but I can honestly see all of these games being even better with more variety in the playable character.

So this is going to sound contradictory but the other main reason to include as much variation as possible is so players can play as themselves.  Yes I can hear you saying “But Matt didn’t you just say….” from here but let me make it a bit easier. I have been able to play as a virtual representation of myself since the dawn of gaming, these other groups of people have not. Can you imagine the thrill for a newly wheelchair bound teenager to be able to play as a confident alien killing super hero with a fully upgradeable wheelchair of death? Just think for a second how a gay Asian women would feel if she could role play as herself commanding a warship through the depths of space. It is empowering for people that quite often need a little empowerment in their lives.

I also want to be clear in saying that if you as a gamer want to play as the typical gaming hero then great! You can do that, it is awesome right? Being able to play as super hardcore version of yourself is cool there is no denying. Can you see where I am going here? If you are the type of person that wants to deny that feeling to another person, regardless of their race, sexuality or handicap then I suggest you need to take a long hard look at yourself. Why would you want to deny joy to others? Why would you stop people from enjoying something that you also enjoy? Why prevent people from something positive especially when it has absolutely no effect on you whatsoever? I am not writing to this to lambast you, but in the hope it makes you think and perhaps re-evaluate your views.

I would also love to see developers take some of these ideas on board. I have a feeling that AAA developers are a little scared of branching out from a sure thing and I can’t say that I blame them. There is a lot of money and people’s livelihoods on the line with any game being developed. The tried and true formula that has been around for such a long time now has always brought in the cash so it is safe to stick with it. Thankfully indie titles are much more likely to take risks and so we are seeing a much larger variety of lead character in these games developed by talented small teams. These games are also selling well so I hope the big studios catch on and catch up soon. Strides are being made (Assassin’s Creed Syndicate and Mirrors Edge for example) but it hardly seems like it is happening fast enough.

Diversity is not a fad, it is not about appealing to minorities and it is not about political correctness. Diversity, in gaming at least, is about catering to everyone not just a group of people who have had it their way for too long. It is about allowing people to play games how they want to play them. It is about giving gamers more options, more ways to play. It is about being inclusive and not exclusive. It is about the ability to experience something different from everyday life. Most importantly diversity in games is about bringing more fun to more people regardless of who they are. How can anyone argue against that?