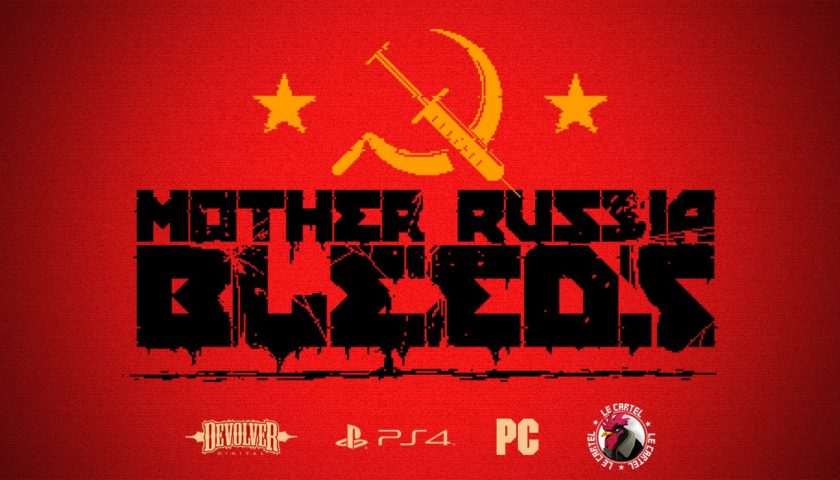 Back in the day, I loved the sidescrolling beat-em-up genre. Cadillacs and Dinosaurs, Vendetta, Teenage Mutant Ninja Turtles Arcade and even The Simpsons Arcade all sucked plenty of 20c pieces from my pocket. But the beat-em-up that stole most of my time was Final Fight. The Capcom developed brawler kept me entertained for ages and the 3rd entry was one of my favourite games on the SNES. So when I heard Mother Russia Bleeds was going after that Final Fight feeling I was immediately on board. Well, Mother Russia Bleeds certainly captures that old punchy style, the only problem is I don’t remember Final Fight having this many crack dens, drugged out hobos and people dressed in gimp masks.

Mother Russia Bleeds holds nothing back in the “adult” content department. It is chock full of swearing, drugs, head explosions and broken bottles stabbed into faces. This is not a game for the young ones that is for sure. In fact, at times I found this tendency to push the envelope of good taste simply too much. I am all for adult content in games and usually not one to worry about this sort of thing but to be honest this game makes Hotline Miami look like Play School at times and that in my mind is just excessive.

Which is a shame because the beat-em-up action is top shelf. There are four very unique characters to choose from, each with their own pro’s and cons. The game controls wonderfully with light and heavy attacks, throws, jumps and dashes all combining together in a fighting system that feels both classic and fresh. There is also a unique spin on health pickups. Players carry with them a syringe with 3 health boost shots. This syringe can be refilled by draining the blood of dying enemies (indicated by their thrashing on the ground). It isn’t the most hygienic way to regain health but let’s be honest, it probably isn’t much worse than eating hotdogs out of broken trash cans.

There are two modes on offer in Mother Russia Bleeds. A story mode and a wave mode. The story mode is basically the classic beat-em-up formula. The story is as basic as it comes but really you only need the flimsiest of excuses to punch things in the face in these sorts of games. What the story mode does very well is boss battles. Each of these difficult encounters throws a unique twist at the player and it makes them highly entertaining. Wave mode is exactly what you would expect, waves of enemies charging at you until you succumb. Both modes are playable with up to four players or AI bots making it easy for even the loneliest of gamers to feel like they have friends. The AI isn’t too bad either and will quite often rescue you from certain doom.

With Mother Russia Bleeds you have a very very good beat-em-up game that is in some ways let down by its penchant for excess. The control and fighting systems are some of the best in the genre and the boss battles are exceptional. It is just a shame that the developers crossed the line into bad taste so often. If you are a fan of this classic genre and if you are not affected by extremely strong adult themes then Mother Russia Bleeds is the perfect game for you. Those who have a little bit more of a delicate constitution or find this sort of content unappealing it is strongly advised that you find your beat-em-up fix elsewhere.